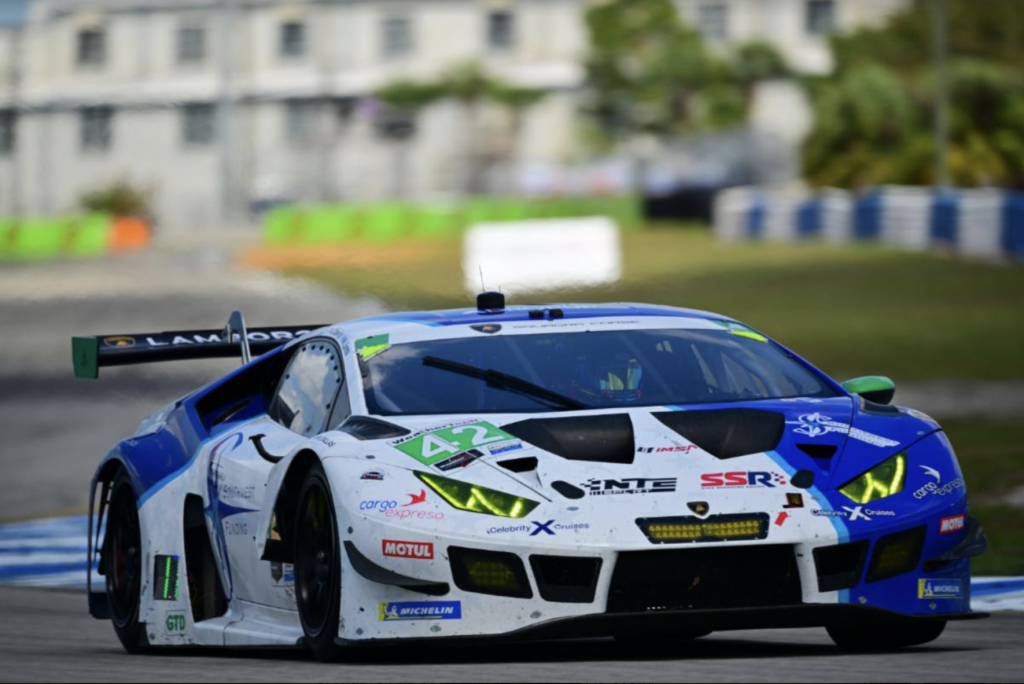 DALLAS, Tex., (April 20, 2022) – After missing the Long Beach Grand Prix due to a tire blowout in the team’s race transporter, professional sports car racing team NTE/SSR is back on track and ready to resume the 2022 IMSA WeatherTech SportsCar Championship next week at WeatherTech Raceway Laguna Seca. The Lamborghini racing team will contest in their third event of the year, racing the No. 42 Lamborghini Huracan GT3 Evo with drivers Jaden Conwright and Marco Holzer.

“Missing Long Beach was really hard for us,” said NTE Sport team owner Paul Mata. “That race is one of my favorites and it was a dream to have NTE/SSR compete there, and with such a strong lineup. However, after that setback, we were able to focus on WeatherTech Raceway Laguna Seca and put together a strong lineup. I’m excited to have someone of Marco’s caliber join the team and I’m looking forward to what we hope will be a great race weekend!”

In transit from the team’s Dallas-based shop to Long Beach, California, the NTE/SSR transporter suffered a tire blowout 280 miles into the 1,500-mile drive. The driver of the truck expertly brought the transporter to a safe stop, narrowly avoiding totaling the transporter or having contact with any other cars. The tire took out the radiator, DEF (Diesel Exhaust Fluid) components, and the wiring harness and also damaged the suspension. The truck was towed 80 miles back towards Dallas, and Mata immediately sought out to get parts and repairs, while calling IMSA teams and local transportation options. As almost every business has experienced since the start of the COVID-19 pandemic, obtaining parts or replacement solutions in quick time was not possible, and the team was unable to make the repairs and the 1,500-mile journey in the 48-hour window in which they had to arrive at the downtown Long Beach street circuit by. Though the team missed the event, under Mata’s leadership, the repairs were completed, and the truck will again make its way to California for the IMSA WeatherTech Laguna Seca event next week.

Jaden Conwright, rising sports car racing star and inaugural winner of the IMSA Diverse Driver Development Scholarship Program, will again race the No. 42 machine, enjoying his first season as a Lamborghini GT3 Junior driver. This will be Conwright’s first time participating in the event, the Hyundai Monterey Sports Car Championship presented by Motul, though the 22-year-old Newark, CA native has been a longtime fan of the event.

“I’m really looking forward to running at WeatherTech Raceway Laguna Seca as it’s one of my home tracks that I began my car racing career at,” said Conwright. “We have some catching up to do after the misfortune at Long Beach, but I have no doubt that we’ll be competitive with Marco and myself. We’ll head in with the same approach as always and aim to make the best result we can as a team.”

Thirty-three-year-old Marco Holzer will make his return to the IMSA WeatherTech SportsCar Championship for the first time since 2015. The German started racing in karts, eventually moving up to Porsche Carrera Cup Germany. He became a Porsche driver in 2010, racing for banner teams like Manthey, Flying Lizard Motorsports, Prospeed, and Paul Miller Racing. He holds two podiums at the 24 Hours of Le Mans, finishing third in 2010 and 2014.

“I’m super happy to be back racing in IMSA,” said Holzer. “It has been too long. I have so many great races and memories of racing in the United States. I’m looking forward to the new challenge, new team, new car, and all together at Laguna Seca. It couldn’t be better!”

This event will be the fifth IMSA WeatherTech SportsCar Championship start for both Conwright and Holzer, though the German has completed 28 in the series predecessor, the American Le Mans Series. Holzer last raced at Laguna Seca in 2013 with Paul Miller Racing, where he earned a sixth-place finish, his best at the circuit.

Located near Monterey, California, WeatherTech Raceway Laguna Seca is revered as one of the most iconic road course circuits in North America, boasting the infamous Corkscrew turn which features a 10-story drop from Turn 8 to Turn 9. Fans and drivers alike hold the 2.238-mile, 11-turn circuit track in high regard, as it has hosted some of sports car racing’s most dramatic battles.

The 2022 Hyundai Monterey Sports Car Championship will take the green flag on Sunday, May 1, 2022, at 12:10 PM PT. The race will run for two hours and forty minutes, showcasing four of the five IMSA WeatherTech classes: DPi, LMP2, GTD Pro, and GTD. The race will air in its entirety on both NBC and Peacock, beginning at 12:00 PM Pacific. Fans can also tune in to IMSA Radio for live, comprehensive coverage of qualifying and the race. The full event schedule can be found on IMSA’s event page.