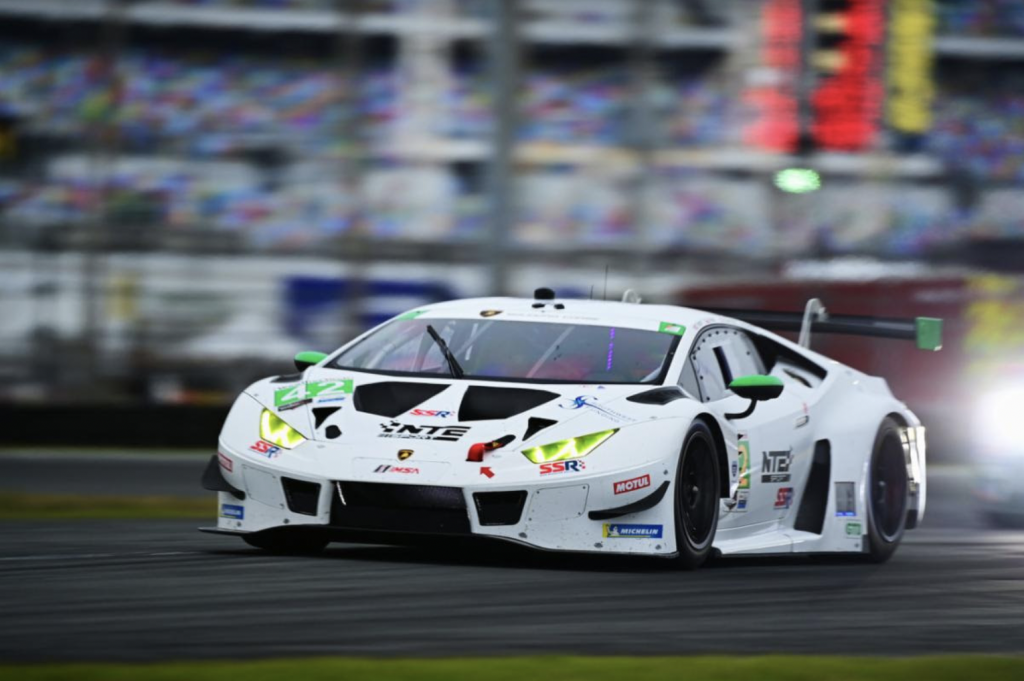 DAYTONA, Fla. (January 26, 2022) – The action heats up this weekend at Daytona International Speedway as NTE/SSR prepares for racing debut of the team’s new No. 42 Lamborghini Huracan GT3 Evo in Saturday’s Rolex 24 at Daytona. Returning for another season in the GTD class, the new collaboration between NTE Sport and Star Spangled Racing will see the No. 42 Lamborghini driven by Don Yount, Benjamin Hates, Jaden Conwright, and Markus Paltaala. The Dallas-based team will also welcome the return of sponsors Gas Monkey Garage, Southwest Funding, Lamborghini Dallas, and the DropUp agency.

Last week, the team completed a three-day test at the Roar Before the 24, the first series-wide pre-season test before the main event, this Saturday’s Rolex 24 At Daytona. Though the drivers and crew were able to complete some minimal testing during the off-season, the Roar allowed the drivers additional seat time and valuable on-track experience to gain further knowledge about the car, and data specific to Daytona International Speedway. While other teams ran with seasoned vehicles, the team started from square one with their new car, going through a standard checklist necessary for a shakedown to get the car ready for three days of testing.

All four drivers were able to rotate through the driving duties, each learning the car and getting comfortable with the circuit over varying conditions. As previously announced, all four drivers have previously raced with NTE in 2021 and will return to run the Rolex 24, with the full-season lineup to be announced at a later date. Yount stands as the only driver to complete the team’s four races last year. Benjamin Hites made his IMSA debut last year at Petit Le Mans, qualifying the No. 42 NTE Sport Audi R8 LMS in second place. Both Hites, and Jaden Conwright, the winner of the first IMSA Diversity Scholarship have both been signed this year as Lamborghini GT3 Junior Drivers for the 2022 season. Markus Paltaala rounds out the lineup as the most seasoned veteran on the team, providing a vast array of knowledge and experience to the team.

Fortunately, the weather for the Roar ranged from warm and sunny to wet and cold, giving the teams a sample of what would be in store for this week’s Rolex 24 At Daytona. The current forecast shows rain for each practice day, with sunny but cold conditions on both race days. While the weather leading up to race day will primarily stay in the 50s and 60s, race day will see lows in the 30s, with highs not going above 53 degrees. The cold temperatures will make for a slick track, likely increasing the risk of on-track and pit lane incidents. The field is the largest since 2014, with 61 cars listed on the entry list for the 24-hour race.

The Rolex 24 At Daytona tests drivers like no other event in North America, pushing man and machine to the limits, racing on the Florida road course for 24 hours straight. Each driver will need to achieve four and a half hours of racing in the event, making strategy a crucial key to a team’s success. Not able to rotate out, the crews will eat and sleep in pit lane between pit stops, which will occur about every hour of the event. The race will go green on Saturday at 1:40 pm Eastern on NBC before channel hopping to USA for select blocks. Fans in the United States can stream live on Peacock, the replacement for last year’s TRACKPASS. International fans can watch on imsa.tv or visit IMSA’s site for international coverage. For all event information, visit the official event page. IMSA Radio will offer live coverage of all the sessions from the circuit, streaming live for free online.

Don Yount
We had a very productive test, continuing our shakedown of the new car. The team did a great job, methodically working through all the necessary steps, not rushing what we needed to do to get ready for this race week. We feel we have a great car over the long runs, and in a race like this, that’s exactly what you want. We have a few more things to work on this week, and with several practice sessions, we should be able to get it all done.

Benjamin Hites
I’m really looking forward to this weekend, as it will be my first endurance race in the United States and the first time in a Lamborghini Huracan GT3 Evo. We all had a solid start during last weekend’s Roar qualifying race, and we found a lot of places to improve too. The race will be tough, and I’m sure that all the NTE crew and my teammates will give our best to get the best possible result. I’m looking forward to it.

Jaden Conwright
I think we definitely had a productive three days of testing for the Roar Before the 24. The Lamborghini Huracan GT3 Evo is a brand new car, basically. We have a decent baseline on it but we don’t have a lot of information. We’re just learning all the nuances about the car. We had no issues, we got good drive time in for all the sessions, and I think we definitely have a good starting point going into the 24. Overall, I think we have a solid car that’s easy to drive quickly while running fairly conservatively. We’re definitely still searching for a bit more out of the performance, but I think in terms of an endurance car, right now we could easily run the car for the full 24 hours. I’m really looking forward to just hopping in this week and getting back at it on Thursday and seeing what we can do to improve the car a bit. Hopefully, we’ll keep everything running solid for the race.

Markus Paltaala
We just did three days of almost no issues. New car, first time running it, and we just rolled through the program. That’s very good news. I think we have a good car for the race, we could start it right away, but there is still a long list of small improvements we are chasing. It’s still important for us to use the sessions on Thursday and Friday well, but I’m already happy to jump in the car and start the 24 with where we are. I think we have a little bit of a conservative setup, which is good for the race, but we will chase a bit more performance on a lap. It’s been a good weekend of preparation and there is still work to do.

Michelin Pilot Challenge
In Michelin Pilot Challenge, NTE Sport has partnered with mc² autosport, entering Friday’s four-hour endurance race with a No. 12 Aston Martin Vantage GT4, driven by Manny Franco, Josh Hurley, and Romeo Kapudija. Official practice sessions for the BMW M Endurance Challenge at Daytona will get underway on Wednesday, January 26, 2022, and the first race of the season will take the green flag on Friday, January 28, at 1:35 PM Eastern. It will stream in the United States on Peacock, NBC Universal’s streaming service, and on imsa.tv internationally. For full event information, visit imsa.com.