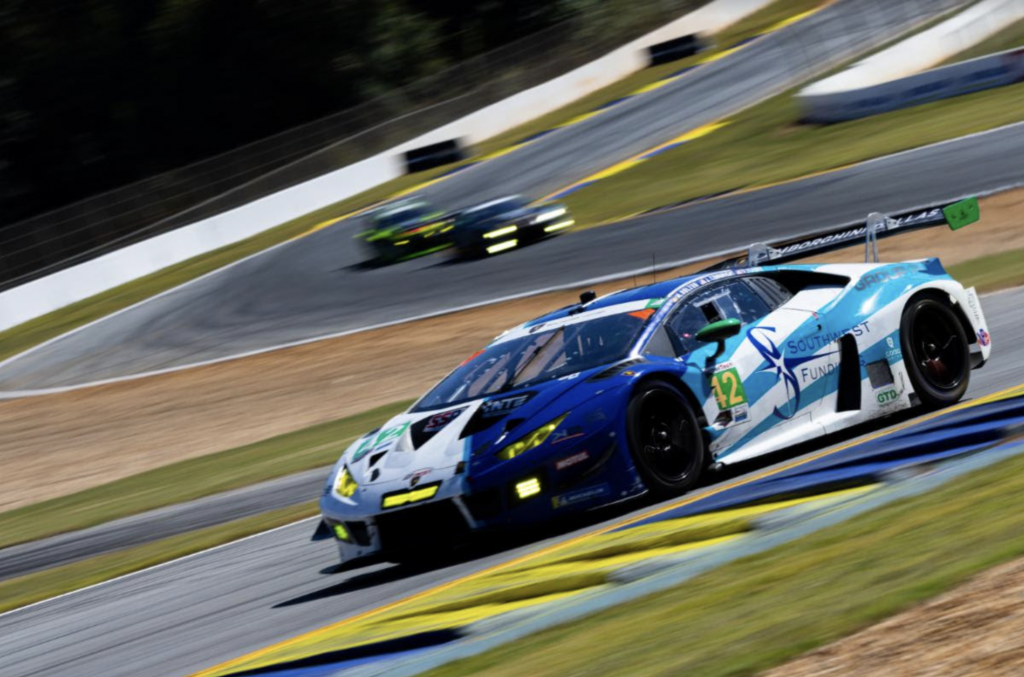 BRASELTON, Ga., (October 3, 2022) – NTE/SSR’s promising run at the 25th Annual Petit Le Mans ended on a disheartening note on Saturday evening, as the sports car racing team closed out the 2022 IMSA WeatherTech SportsCar Championship. The Lamborghini team showed strong potential all weekend long leading up to the season finale race, but in the end, a pitstop error from a neighboring team ended the effort’s hopes of a top-five or podium finish.

“It’s hard to put the words together after all of the time and effort this group has put in all year,” said Team Owner Paul Mata. “Our alternate strategy for Saturday’s race was playing into our hands, but another team’s actions prevented us from seeing it through. That’s just racing, but that doesn’t make it any easier. I’m disappointed for everyone on our team, but still proud of the effort each and every one of them put in.”

The No. 42 NTE/SSR Lamborghini kicked off race week for the Motul Petit Le Mans on strong footing, placing second in the GTD class in the opening practice session. The team made the most of the three practice sessions, cycling drivers Don Yount, Jaden Conwright, and Marco Holzer through to ensure each athlete felt comfortable with the car as the team worked to dial the setup and balance in for the 10 hours of racing ahead.

Inaugural IMSA Diversity Scholarship winner Jaden Conwright produced another impressive qualifying session in the highly competitive GTD field, setting the team up to start from third place on Saturday afternoon. Starting behind the No. 1 BMW of Madison Snow and the No. 39 of Robert Megennis, Conwright had a clean opening lap, taking second place, setting sights on Snow several cars ahead. The first full course caution came in the opening hour, after about 40 minutes of running. Conwright pitted the Lamborghini for a full-service stop, and Don Yount got in the car, taking over the driving duties for the early portion of the race. Under caution, the team again pitted the Lamborghini for a splash of fuel, also giving Yount clean air to race in.

The No. 1 BMW of Snow also had breathing room over the field and was eventually able to catch the Lamborghini to attempt a pass to lap the car. The No. 42 NTE/SSR received some unexpected TV time when the No. 18 Era Motorsport LMP2 car pulled alongside Yount while the Lamborghini held off a pass from the class leader. The prototype spun on its own accord and went off into the gravel trap, bringing out a full-course caution and leading the majority of the GTD class.

Yount stayed out on track while a group of GTD cars pitted under a lengthy caution, beginning hour six from eighth place. The NTE team continued with their unique strategy to pit off-sequence, bringing Yount in just before the field went back to green. The No. 42 Lamborghini had a driver change and took on German Marco Holzer to take the green flag with just under eight hours remaining. Holzer restarted in 11th, behind the No. 27 of Ian James. He made the pass on James and Ryan Hardwick in the No. 16, taking eighth place before another lengthy full-course caution.

Yount and Holzer continued to share turns driving the car over the next several hours, bringing the Lamborghini up from 11th place to sixth. Hour six had a bit of excitement when Holzer came into pit lane to pit for tires and fuel, when he was forced to go off-road to avoid a spun prototype blocking pit lane. He brought the car safely into the box, taking tires and fuel before rejoining.

The team’s alternate strategy began to pay off, and hour by hour, the No. 42 Lamborghini climbed up the charts. With less than two hours to go in the race, the team’s luck once again changed. A last-minute call called for several cars to come into pit lane, including the NTE/SSR Lamborghini and it’s neighboring AWA LMP2 team. AWA pitted unexpectedly and first, mistakenly putting a tire too close on the ground to the NTE/SSR pit box. When Holzer came in to pit the Lamborghini, he had to come in at a different angle and farther away, making the team’s fuel hose unable to reach the car. The team was able to change the tires and pull the car back, fully in the box after the AWA car left, taking additional time to refuel once Conwright returned to the driver’s seat. The move cost the team precious time, effectively putting the squad two laps down.

From there, the team had little chance to climb back up in the time remaining, but still ran, hopeful to capitalize on any late-race cautions or attrition for other cars. In the end, the NTE/SSR Lamborghini finished in ninth place, ending a challenging season with results that failed to reflect the team’s pace and efforts.

“Our program grew exponentially this year, requiring a lot from everyone on our team,” concluded Mata. “Each person stepped up to the plate and rolled with all of the punches. We can still take pride in the fact that we faced many challenges this year and never gave up. It was a great first season racing Lamborghini machinery in WeatherTech and Super Trofeo, and I’m looking forward to what next season brings.”

The team will announce 2023 plans in the coming months.

Don Yount
The Lamborghini was good off the trailer when we started this weekend. Ninth place in GTD for Petit Le Mans is a tough result to swallow after such a promising start. We were running clean and had a good pace all race, but an errant pit stop with a prototype in the stall next to us cost us about 60 seconds of time. That far into the race, it knocked us from a top five and possible podium result. Great drives and hard work from the crew for a solid 10 hours of racing and a great effort all season long. Everyone knows the team’s potential and the strong outing this weekend proved it again.

Jaden Conwright
As sad as it sounds, it was nice to finally finish an endurance race without any mechanical issues or penalties. As a team, we’re still working on things, but we’ve made some really great strides as a group this year. We were on a different strategy than the other teams and it was slowly playing into our hands before that pit stop that shook everything up. We just got caught out in a racing mishap that was out of our control. Speed-wise, we were right there with the top three in our class, even faster than some of the GTD PRO class cars. This event showed that we’re fast and have what it takes to compete in such a competitive field. Sadly in racing, it’s not just about speed. But our team has grown and gelled together so well this year under the leadership of Paul Mata. If we can continue to build on what we’ve established this year, we’ll be off to a good start and on stronger footing than where we started this year.

This year’s program would not be possible without the IMSA Diversity Scholarship and I want to thank John Doonan and IMSA for creating this program,. It’s no secret that it’s card to break into professional sports car racing and being the first recipient to receive the honor has not been lost on me. This scholarship aided NTE/SSR in covering entry fees and getting this program on track. Without the scholarship, my season in IMSA would likely have not been possible. I’m thankful for the opportunity to be able to build on my career and compete at such a top level. I can’t wait to be back.

Marco Holzer
Saturday was a disappointing end to the season and hard to swallow. We were looking good at fifth place with two hours to go until that fatal pit stop. We couldn’t park right because there was a tire from a different car in the way, so we couldn’t refuel in a timely manner either. We lost precious seconds and track time that put us back to fighting for a top-ten finish. Without that incident, a podium spot would have been possible. Thanks to the team for the whole year, and to our partners, Lamborghini Dallas, Southwest Funding, and Group A. This team is small but mighty and I hope to be back next year with them. Daytona is coming soon.