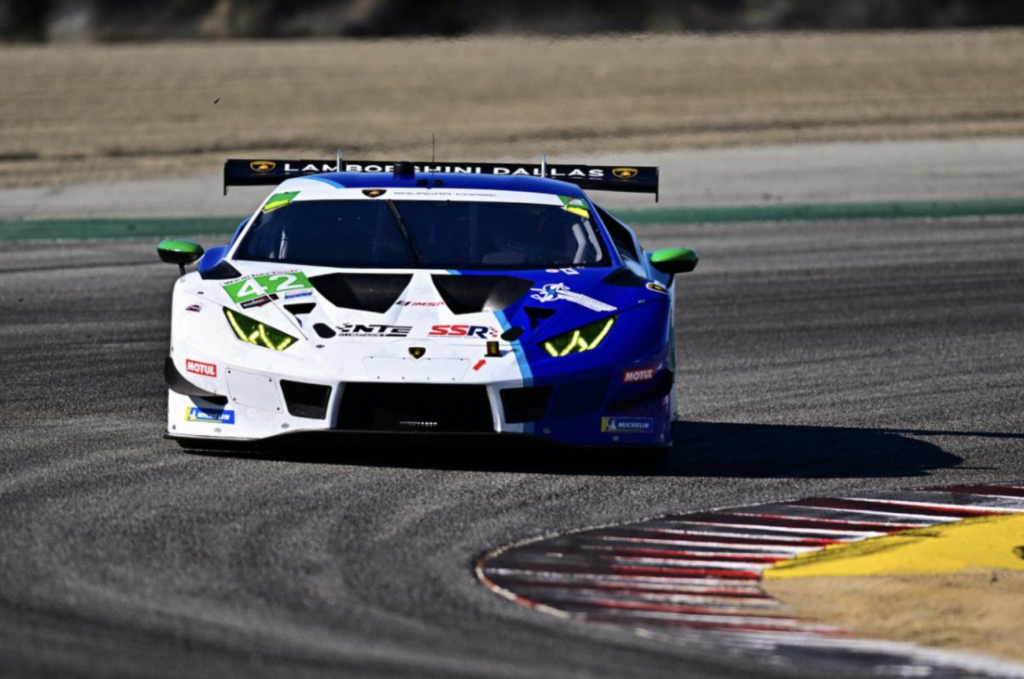 SALINAS, Calif., (May 2, 2022) — While the temperature at WeatherTech Raceway Laguna Seca was rather cool, NTE/SSR put some heat into their season at the IMSA WeatherTech SportsCar Championship round four with the No. 42 Lamborghini Huracan GT3 Evo. Lamborghini GT3 Junior driver Jayden Conwright earned the team a second-place starting position and together, he and Marco Holzer drove to earn a sixth-place finish.

“We had a great car this weekend and showed we have what it takes to run up front,” said NTE Sport owner Paul Mata. “We’ve had a lot of bad luck this year that had prohibited us from finishing a race, so it was nice to be able to complete a race and run strong. We showed we have the speed, and we’re looking forward to more progress. It was great to have Marco join our effort as well, and he was a good fit for Jaden. They both performed well and we hope to continue to improve our results this season.”

This race marked the first race back in the IMSA WeatherTech SportsCar Championship for NTE/SSR newcomer Marco Holzer, who previously raced in the IMSA-sanctioned American Le Mans Series. Holzer wasted no time jumping back into the IMSA WeatherTech SportsCar Championship for the first time since 2015. He and Conwright used Friday and Saturday’s practice sessions to provide detailed feedback to the team to dial in the No. 42 Lamborghini Huracan GT3 Evo setup for Sunday’s two-hour, forty-minute race.

A strong second-place qualifying position from Conwright showed the GTD class that NTE/SSR has the pace to be a top contender. When avoiding an out-of-class LMP2 spin on track the No. 42 lost a position early in the race, but an incident involving in-class Russell Ward in the No. 57 allowed Conwright to regain the lost position.

The team strategy called for an alternate approach, hopeful the race would play into their hands, but Conwright experienced a small position setback that was chipped down throughout the pit window. Though the No. 42 experienced some intermittent power loss during the first stint, Conwright was able to keep the car within the GTD top-four until the mandatory driver change.

Holzer started his stint in 10th position and spent his time behind the wheel climbing back through the field. Over the radio, he reported to the team that he was losing grip in his aggressive pursuit. After overtaking two more cars with just minutes remaining in the race, Holzer took the checkered flag in sixth place, the team’s best finish to date this season.

Jaden Conwright
I think that we had the pace for a podium, so it’s a bit frustrating to have some little technical issues throughout. Given all the issues we had earlier in the year, I don’t think we had a bad result. As a team, we’ve never really worked together in a sprint round so it’s a new environment for us. I think overall there are a lot of positives to take away and we know what areas we need to improve. I’m looking forward to Mid-Ohio. We should have some of the little details ironed out a bit more.

Marco Holzer
I think starting with a sixth-place finish in the first race was good and the car was good. I had a little bit of trouble and destroyed the tires while trying to fight back, but in the last 10 minutes or so I was able to overtake two cars. We have to see where we are losing time. Pace-wise, we are there with the front cars. I’m overall really happy and everyone did a great job. I hope to do more.

Lamborghini Super Trofeo North America
Race one on Saturday had an aggravating start for Jeff Courtney, who began in ninth but lost positions by turn one due to multiple cars jumping the start. He focused forward in the No. 42 Lamborghini Huracan Super Trofeo Evo2 for the rest of the race allowing him to avoid numerous competitors’ offs, spins, and car-to-car contact. After position gains and setbacks, Courtney used a race restart to his advantage and drove his way through the field earning one position from where he started the race. Courtney maintained this gain and crossed the finish line eighth in class.

Courtney started Sunday’s race fifth in class. Two competitors passed the No. 42 at the start of a full-course caution. A timely review was completed and Courtney was able to regain the two positions before the race restart. With a little over 10 minutes remaining, he held back seventh place with no pressure from behind. With the end of race in sight, the car was forced to complete a drive-through penalty assigned for slowing in pit lane during the pit stop. Due to this lost time, Courtney finished the race in ninth place.

Next up in the IMSA WeatherTech SportsCar Championship for the Dallas, TX-based team, is the Lexus Grand Prix at Mid-Ohio May 13-15. The team will make an announcement regarding their plans at a later date. For event information, visit imsa.com.

Jeff Courtney
I had a blast driving the Lamborghini. It’s a super cool car. The weekend felt like a bit of a disaster due to mistakes; some of my own, some of others. While there were a lot of things that I don’t think went in my favor and I wanted to do a hell of a lot better, there’s no crying, it’s racing. I’m thankful for Paul Mata and the whole NTE crew for a great car and this whole weekend.