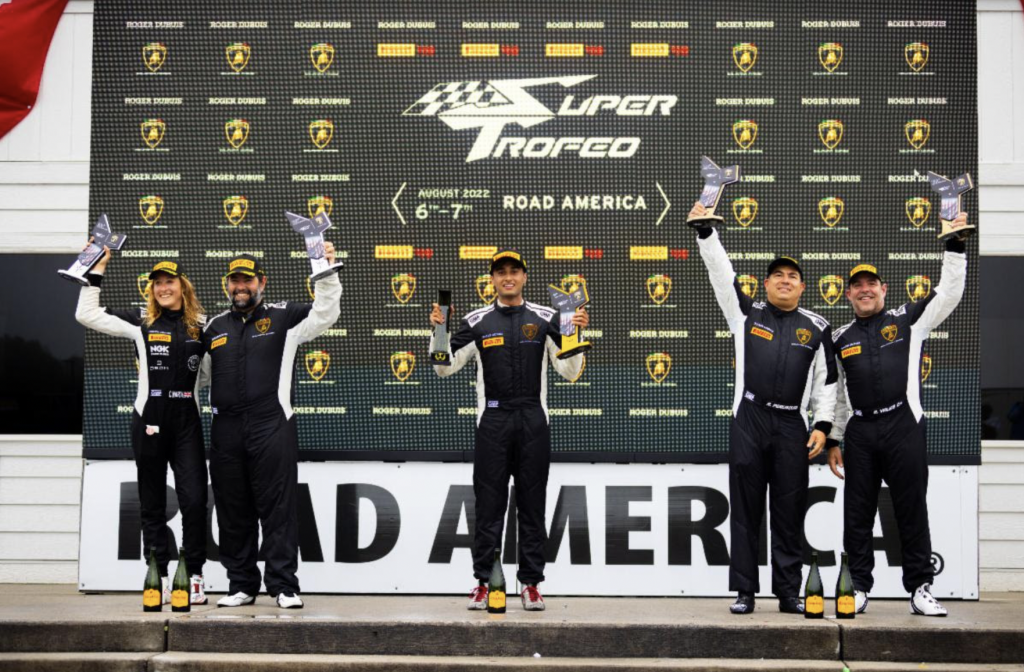 ELKHART LAKE, Wis., (August 8, 2022) — Just like the weather, NTE Sport had a hot and wet weekend at the famed Road America road course for another action-packed race weekend. Both the NTE/SSR WeatherTech and NTE Sport Super Trofeo programs had some disappointing moments that dampened the mood over the course of the weekend, but the team finished the weekend on a high note, with a double-podium finish on Sunday. The NTE/SSR GTD Lamborghini charged from the back through the field not once, but twice – finishing fifth in class in the headlining IMSA Fastlane SportsCar Weekend. The No. 89 and the No. 42 Super Trofeo Lamborghinis kicked up the heat in the Lamborghini Super Trofeo North America doubleheader, collectively bringing the team one win, two podium finishes, and one top five in class finish.

“It’s an emotional tug of war when our weekends are so mixed with highs and lows,” said team owner Paul Mata. “Jaden Conwright and Marco Holzer have been great paired up together in our WeatherTech GTD entry. They keep showing their strengths and we know we are confident we will continue to improve from here. It was great to have Ashley Freiberg with us again, and I’m proud of the hard work Lucas Petersson and Keawn Tandon put in this weekend in Super Trofeo.”

WeatherTech SportsCar Championship
The No. 42 NTE/SSR Lamborghini Huracan GT3 Evo started the week off right with Jaden Conwright setting down a searing lap time at the end of the first practice session, showing the GTD field they had the speed to be a front runner in the highly competitive field. Set for qualifying on Saturday, Conwright finished with a sixth in class position, but the times were disqualified due to a mishap at the pit box before the session ended.

Starting at the back of the field on Sunday’s race, Conwright chipped through the pack from the get-go. Rain began and track conditions were slick though not yet technically wet enough for rain tires. Every team in pit lane closely watched the weather radar, each forced to make a strategy call to stay on Michelin slicks for dry race conditions or opt for rain tires. Even under a full course caution, cars were spinning as the surface worsened for the dry tires. Safely handing the car off to Marco Holzer, who chose rain tires, Holzer returned to the race under double yellow. Track conditions dried and the No. 42 Lamborghini had fallen back down to 11th in class. With just under one hour remaining, Holzer conducted a pit stop for tires and went back to slicks. Charging for the front, Holzer climbed to sixth in class with 30 minutes remaining. Completing another position take over before a full course caution, he rode out the remainder of the race fifth in class, taking the checkered flag under the yellow.

The IMSA WeatherTech SportsCar Championship next heads to VIRginia International raceway August 26-28 for the Michelin GT Challenge at VIR. NTE/SSR’s IMSA WeatherTech program plans will be announced at a later date. For event information, visit imsa.com.

Jaden Conwright
We had good potential throughout the weekend. We showed good pace during practice one. We were trying to understand the car a bit better during practice two and then qualifying was tight. Heading to the race, I think we show the pace that Marco and I have. Little mistakes here and there kept putting us farther back than we would like. Every time we always rebounded and drove our way back through the field. We were driving one of the few cars that made up quite a few positions just on pure pace. We need more time, testing, and preparation so we can work out some of the little kinks that have been hindering us this season. Working on the little details will help us take more of a fight to the pro cars at the front. Overall, I’m pretty happy with the performance this weekend. We just need to keep our heads down. Make sure that we don’t make the same mistakes twice and keep moving forward.

Super Trofeo North America
In a repeat scenario from Watkins Glen last month, a red flag in qualifying session one led to a frustrating start to the NTE Super Trofeo program. Very quickly into Saturday’s race, Ashley Freiberg incurred another setback from her fifth place starting position in the No. 42 as she was spun by Slade Stewart in the No. 14. A full course caution allowed for Freiberg to catch the pack and for all four NTE Lamborghinis to push for positions with the restart. With twenty minutes remaining, the race went back to green, and the delayed pit window opened. Todd Archer and Tiger Tari completed their driver change in the No. 18 and Tiger entered the field in his first professional race. Shortly after his stint started, an incident with Stewart in the No. 14 rendered the NTE No. 18 unable to continue. Starting in seventh in Am, Jeff Courtney in the No. 66 had a clean race and finished eighth in class. Keawn Tandon in the No. 89 started the race fifth in LB Cup. Avoiding incidents that plagued the race, Tandon picked up two positions, putting him on the podium for his debut professional sportscar race.

Race two was a stronger start for the four NTE cars due to more green time for hot laps in the second qualifying session on Saturday. Tari started seventh in LB Cup in the No. 89 and reached fifth in class when he experienced a mechanical issue causing him to return the pit box. After diagnostics were run on the Lamborghini, it was determined to be a fuel pump failure and the car was unable to continue. Starting third in Am, Courtney in the No. 66 was maintaining a position within the top five in class when it started to rain. Still on slicks, Courtney went off track and the car was damaged and unable to continue. The No. 89, driven by Keawn Tandon, lined up second in LB Cup for the race start. During the formation lap, contact between the polesitter No. 14 and the No. 9 knocked the No. 14 out from starting the race. Tandon took the green flag first in LB Cup and was able to maintain a top-two position for most of the race. After a red flag and allotted tire change due to inclement weather, he restarted the race in second in LB Cup with a significant gap of out-of-class cars between himself and the class polesitter. He chipped through the field, not only taking position one in class, but reaching teammate Ashley Freiberg of the No. 42 in the ProAm class. Advised by the team to hold position and keep the race clean in the wet, Tandon took the finish line first in class, claiming his first sports car win. Starting fourth in ProAm, Lucas Petersson drove the first stint in the No. 42. A position was lost, but he maintained a solid performance as the weather shifted and the track surface became slick while the cars were still on dry tires. He handed the car over the Freiberg, who spent a deal of time under a full course caution that became a red flag, ceasing the racing as well as the race clock. While waiting to restart the race, the officials allotted a tire change on account of the weather. Restarting the race on rain tires and from fifth in class, Freiberg charged from behind with 17 minutes remaining and was able to take third in class and claim the podium step for the duo.

The team will make an announcement regarding their Super Trofeo plans at a later date. For event information, visit the Lamborghini Super Trofeo North America website.

Tiger Tari (LB Cup) ][ No. 18 Lamborghini Super Trofeo
As we always say in racing, there’s highs and lows, and I would like to think about the highs. It was a great pleasure to be racing with my friend Todd Archer, who took me under his wing and showed me how and what needs to be done. Everybody who is a part of NTE with is professional. They really take care of you and take a lot of weight off you so that you focus just on driving. The racing gods were definitely not on our side. On my first lap in race one, I was taken out by another competitor. Our guys did a phenomenal job taking care of everything on the car overnight and we were able to drive again. I started well in race two and started passing people and then the fuel pump took me out before I could finish the race. All I can do is move forward and learn, which I have learned a lot, and appreciate everything all these people are doing for us. All the people who work with IMSA, the Lamborghini people, the medical people, the whole nine yards. This was certainly a pleasant experience and will not be the last. I want to wish our crew member Gonzo a great birthday Saturday, we couldn’t do it without him. Also, Todd’s daughter’s birthday was on Saturday.

Todd Archer (LB Cup) ][ No. 18 Lamborghini Super Trofeo
First of all, I can’t be thankful enough for the invite to be able to race in the Super Trofeo series. Being able to race with a teammate like Tiger, especially in his debut for his pro race, I’m honored. I can’t thank NTE enough for the cars, the team, and the professionalism of the team. We tried our best and, you know, it gave us a platform to build upon. We look forward to the next time that we can try to come out and conquer again. You learn something new every time you race, and we’ll use that to our advantage for the next time that we can come out and be competitive. I can’t thank the team enough.

Lucas Petersson (ProAm) ][ No. 43 Lamborghini Super Trofeo
It went well this weekend. We got a third place in race two. It was rough in the beginning, but more time on the track meant that we got more comfortable. Ashley and I, and the rest of the team have good chemistry, so it was bound to happen eventually. I’m happy it was the first time I was in the car.

Ashley Freiberg (ProAm) ][ No. 43 Lamborghini Super Trofeo
I am so in love with this car and I’m super grateful for NTE Sport. We really deserve to be on the podium after the weekend we had. We had a lot of bad luck, one thing after another, so I just feel like we deserved what we got today. Lucas did a great job behind the wheel as well. When he handed me the car off and it was strong. I feel good!

Jeff Courtney (Am) ][ No. 66 Lamborghini Super Trofeo
Saturday was bad for everybody, I think it was just a tough race. Sunday started off really good and then bad timing as we just came into the rain with a couple of other cars. We were fast. I saved a lot of car for after the pitstop and we would have charged, so I’m happy with that. I was happy with the way the car was driving and my driving. I just didn’t get a chance to prove it.

Keawn Tandon (LB Cup) ][ No. 89 Lamborghini Super Trofeo
This is unreal. I’m still processing it. I wouldn’t have done without the team, that’s for sure. It’s just unreal right now and I’m still comprehending what’s going on. In the moment I was so in the zone that I didn’t process that I was in first and in the last two laps they told me, so then I just backed off and held the in-class finish.