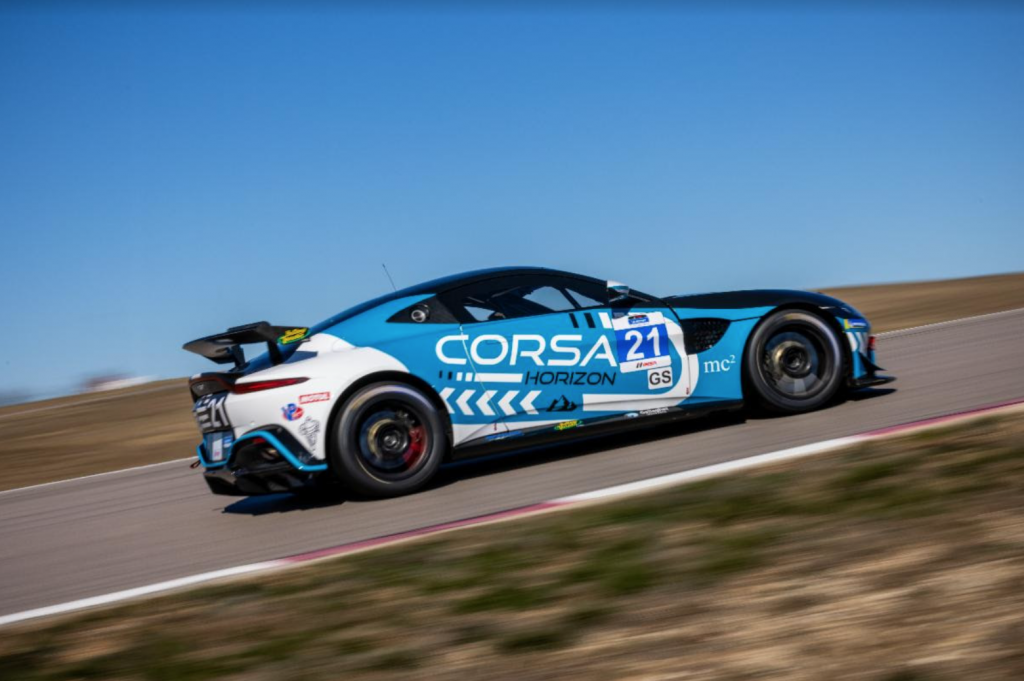 DALLAS, Tex., (January 18, 2022) – Two years after making their Michelin Pilot Challenge debut, IMSA WeatherTech SportsCar Championship race team NTE Sport will return to the series in a new collaboration with mc² autosport. NTE/MC2 will enter the No. 12 Aston Martin Vantage GT4, which will run in the BMW M Endurance Challenge at Daytona, a four-hour race to begin the 2021 season. The entry will be driven by Manny Franco, Josh Hurley, and Romeo Kapudija.

The partnership brings together Paul Mata, owner of NTE Sport and Michael Conn, founder of mc² autosport. Conn created mc² autosport after departing from his GT4 crew chief position at Park Place Motorsports in 2019, eager to have the opportunity to run his own racing programs. Mata, also a Park Place Motorsports alumni, partnered with MC2 to provide the logistics and equipment for the program, already has a plethora of resources at the team’s disposal after two years in IMSA.

“It’s great to have the opportunity to partner with Paul Mata and NTE Sport for this event,” said Conn. “Paul and I have known each other for more than 15 years. I have worked for him off and on, and he has helped me all the same. We both have racing teams in the Dallas area and both were going to the same race tracks so it made sense for us to put our resources together to create a competitive effort and get some new drivers into the sport. We’re grateful for the opportunity and hope to have a fun time while we learn and compete.”

Coming from Ferrari Challenge, the BMW M Endurance Challenge at Daytona will be the first professional race of Franco’s career. In his debut Ferrari Challenge season, The Milwaukee resident earned one win and four podiums, gaining valuable seat time to prepare for his GT4 debut in the Michelin Pilot Challenge this month.

“I am thrilled to be participating in my first ever endurance race at Daytona,” said Franco. “We have a great team with the support of NTE and MC2. I am excited to be driving with Josh and Romeo as my co-drivers and teammates, especially with their experiences as professional drivers. We hope to bring a high level of competition to this race and the upcoming season.”

Arguably the most experienced driver on the team’s GT4 roster, Josh Hurley will bring a wealth of experience and knowledge to the effort. Hurley started his career in go-karts before advancing to club racing in the mid-2000s and climbed through motorsport’s support series of North America to make his debut in the Koni Challenge—now Michelin Pilot Challenge—in 2009.

“I’m so excited to be back at Daytona in IMSA Michelin Pilot Challenge,” said Hurley. “I’ve had a lot of fun and success in the series and I can’t wait to get back out there. It truly is some of the best racing worldwide and getting to race with such good friends on the crew side, and great co-drivers like Manny and Romeo is the icing on the cake!”

For Kapudija, this race marks his return to professional sports car racing after an 11-year hiatus. He made his IMSA debut in 2003 and went on to race as Patrick Dempsey’s co-driver in the Grand-Am Cup, now Michelin Pilot Challenge from 2005 to 2007. He also gained experience in the Rolex Sports Car Series in 2008 and returned to the American Le Mans Series in 2010 with Alex Job Racing in the GTC class.

“The MS2/NTE Aston Martin GT4 entry should be very quick at Daytona, and I know the team is working hard putting together a front-running effort,” said Kapudija. “I’m up for the challenge to push the Aston Martin GT4 to its limit, and thankfully we will have some substantial testing time at the Roar so I can work off some rust. Overall, I feel confident that Manny, Josh, and I will be very competitive! I can’t wait for the race!”

Pending a successful outing, the team hopes to return for more racing later in the season.
The 2022 season will begin at Daytona International Speedway, with the Roar Before the 24, a three-day test that will give Michelin Pilot Challenge competitors five separate on-track sessions to prepare the car for race week. Official practice sessions for the BMW M Endurance Challenge at Daytona will get underway on Wednesday, January 26, 2022, and the first race of the season will take the green flag on Friday, January 28, at 1:35 PM Eastern. It will stream in the United States on Peacock, NBC Universal’s streaming service, and on imsa.tv internationally. For full event information, visit imsa.com.