NTE Sport Lamborghinis Light Up the Competition at Watkins Glen

NTE Sport Lamborghinis Light Up the Competition at Watkins Glen 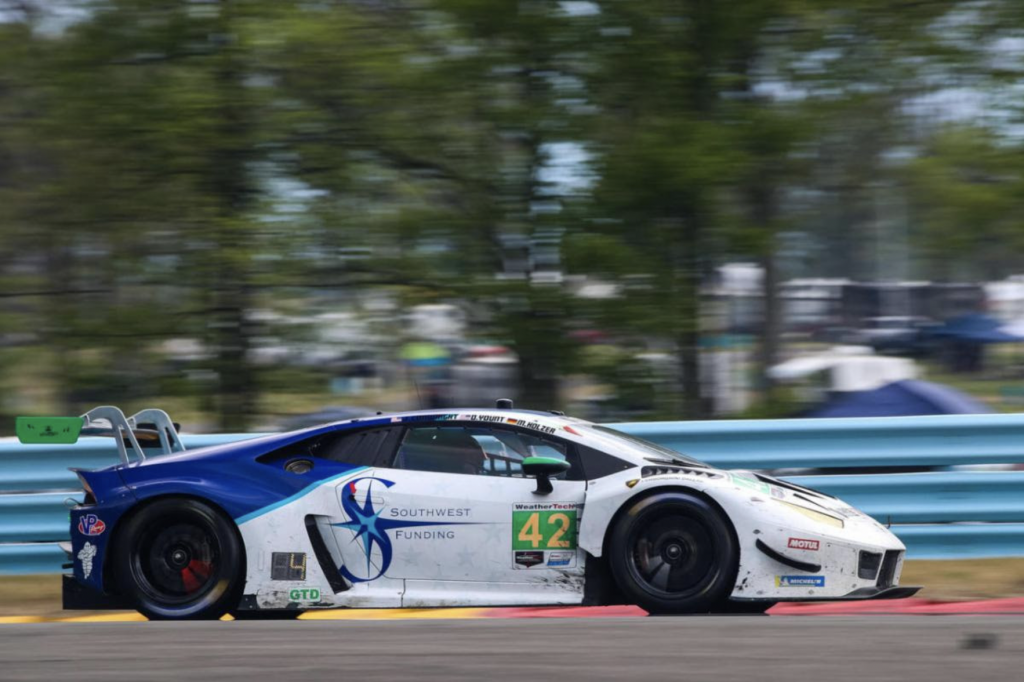 WATKINS GLEN, N.Y. (June 27, 2022) – Dallas-based NTE Sport ascended on Watkins Glen International with five Lamborghinis for a three-race weekend between the IMSA WeatherTech SportsCar Championship and Super Trofeo North America. Though not all of the results were favorable, Fred Roberts secured a third-place finish in Super Trofeo race one, Jaden Conwright earned his first pole position in professional motorsport, and the team’s GTD entry of Don Yount, Jaden Conwright, and Marco Holzer ran competitively with the WeatherTech full-season class leaders to have a strong shot at the podium. An additional four top-five finishes were earned in the Super Trofeo races.

“It was a big move for our team to expand from one GTD entry to now include the strong customer racing program we have in Super Trofeo,” said NTE team owner Paul Mata. “The weekend wasn’t without its challenges, but I’m proud of the performance our customers and team put in. It was a character-building week, but across both programs, we showed we have the pace to run up front.”

WeatherTech SportsCar Championship
Qualifying in the No. 42 NTE/SSR Lamborghini Huracan GT3 Evo on Saturday, Jaden Conwright was slated to drive a blistering lap, looking to secure a strong starting position for the Sahlen’s Six Hours of the Glen. An unfortunate blocking maneuver from another competitor impeded his flying lap, resulting in a sixth-place starting position for Sunday’s big race.

In a change of strategy, the team made the move to start the race with Don Yount driving, moving the No. 42 Lamborghini to start at the rear of the field. Quickly into the race start, the DPI field leaders and LMP cars were mixed into the back of the field. Yount maintained consistency and pace, completing his required drive time in one stint, and bringing the car up to sixth in class. Reentering the field 14th in GTD with Conwright behind the wheel, the charge continued. In his stint between the green race and full course cautions, he brought the car up to fourth in class. Marco Holzer’s time in the car included strategic pit stops and continued fast laps that brought the No. 42 to its highest position of third. During a minor position setback, Holzer entered a full course yellow due to an incident in fourth, which quickly changed to a red flag due to lightning in the area. With the clock continuing to run, the red flag procedure brought cars to a standstill for just over an hour. As cars took back to the track under yellow, the team calculated fuel for the No. 42 and its competitors, deciding to go all-in to the race finish without refueling. If this strategy had paid off, it would have been a podium finish, but with the addition of 10 minutes to the race clock, many teams had to make stops in the final laps of the race. The No. 42 NTE/SSR Lamborghini Huracan GT3 closed out the Sahlen’s Six Hours of the Glen in seventh place.

“This was not the finish we were looking for,” said team owner Paul Mata. “We really demonstrated the car’s pace and the strength of our team. At the end, we went all-in with a bold strategy that could have put us on the podium. It’s really disappointing that the race time was extended for 10 minutes, forcing many teams to pit stop within the last few laps of the race. Close only counts in horseshoes and hand grenades. We’re going to keep fighting this season to make it on those steps.”

The team will make an announcement regarding their IMSA WeatherTech and plans at a later date. For event information, visit imsa.com.

Don Yount
I’ve raced long enough to know not to expect an outcome. This time was different running between third and fifth in class for most of the race with such strong codrivers, and flawless team performance. The red flag killed our fuel strategy and all of the top runners had to pit with minutes left in the race. Great job team and to my co-drivers Marco and Jaden, who ran a perfect race.

Jaden Conwright
Overall, we did a solid job as a team. Once the storm rolled through and cut into our race time in the final hours of the race, the red flag and limited time to race was messy, not just for us, but most of the other competitors as well. Overall it was a positive weekend. We are definitely quick. We went from last all the way up to almost first, and that’s something to be proud of.

Marco Holzer
We had a bit of an unlucky ending at Watkins Glen. We had very good pace but we couldn’t do too much against the race clock, with the limited time we had. It would have been fine if we had more time to race, but I know we weren’t the only ones who had to pit so close to the checkered flag. The car was mega and the team did a fantastic job over the weekend. We deserved much better given our pace, and we were close to the podium. Great job by the team.

Lamborghini Super Trofeo North America
Due to a red flag in qualifying session one and limited available time to get up to speed, Friday’s race one’s start positions were less than ideal for a number of the 36-car Super Trofeo field. Shaking things up even more, a full course caution occurred in lap one of the race. When the 10-minute pit window opened 20 minutes into the race, all four cars strategized to stop early in the allotted window. Even through the challenges, all NTE cars were able to maintain or gain class positions from their race starts in their opening stints. The No. 18 driven by John Miller and the No. 42 driven by Jaden Conwright finished fourth in their classes. Fred Roberts finished third in LB Cup, securing him a podium finish in his debut Super Trofeo race.

Conwright produced an impressive performance in qualifying for race two, putting the No. 42 Lamborghini on pole position for race two, his first career pole position in professional sports car racing. After being pinched in turn one at the race start, a few positions were lost. Also starting P1 in class, Jon Miller in the No. 18 had a strong starting position and lost a few positions at the start. During a full course caution that occurred in the first lap of the race, both Conwright and Miller reported being passed under yellow with their protests unanswered. Jeff Courtney began to find his stride with the No. 66, but with the race concluding under a full-course caution, he was unable to utilize his established comfort with the car, finishing in 13th in Am. Roberts crossed the start and finished fourth in LB class, maintaining a solid pace and consistent laps. Though Yount in the No. 42 and Bergstein in the No. 18 spent their stints completing the race fighting to regain positions, they maintained racing at the front of the field and finished fifth in both of their respective classes.

Both Jaden Conwright and Jon Miller each celebrated personal feats over the weekend, with both American drivers setting new Super Trofeo lap records in their class.

“With some very short notice driver changes and a disappointing first qualifying session one time-wise, it took us a little bit to come together in the Super Trofeo program,” said Mata. “I think by race two we were really showing our potential across all classes entered. Between both races we had one podium and five top-five in-class finishes. I’m really looking forward to continuing this momentum at Road America in August.”

Next up, Super Trofeo North America heads to the lush Road America with the IMSA WeatherTech Championship August 5-7.

Jon Miller (Am) ][ No. 18 Lamborghini Super Trofeo
It was a successful first weekend for us in the Super Trofeo, scoring a pole, leading laps, and nabbing two top-five finishes. I’m confident that if circumstances had been slightly different, we could have been on the podium in both races. NTE Sport gave us a great car. These Lamborghinis are really fun to drive. I understand the appeal of this series now! I’m looking forward to the next time we get to race with NTE after this successful first outing.

Lance Bergstein (Am) ][ No. 18 Lamborghini Super Trofeo
It was a good first weekend with NTE to get to know the team. Some issues on the pit stop cost me a result. NTE prepped a fantastic car and I am confident when I run with them again in the future we will have more to celebrate.

Don Yount (ProAm) ][ No. 42 Lamborghini Super Trofeo
I enjoyed the Super Trofeo experience, especially having not been in the car before. Jaden drove strong and put it on the pole. We had a drive-through penalty that put us back a little, so that was disappointing. I’m glad I was able to experience it, it’s a cool car and different from the GTD.

Jaden Conwright (ProAm) ][ No. 42 Lamborghini Super Trofeo
I think the Super Trofeo weekend went well. I wasn’t supposed to be driving that event so there was zero preparation and zero understanding of anything. I have never raced a sports car on Pirelli tires in general before this weekend, only in single-seaters. There were a lot of unknowns but I think the results were really good. A pole position and hovering around third and fourth the entire stint when I started the car, so it was a learning experience. It’s also the first time I’ve jumped between two different cars in the same weekend. Things could have gone a lot worse with all of the unknowns, I think we did well as a team in all the classes.

Jeff Courtney (Am) ][ No. 66 Lamborghini Super Trofeo
I really like this race track, it’s very fast and very busy, so what’s not to like? I am also really liking the Lamborghini but I am struggling with figuring how to ring its neck for those nine and then-tenths. The turn-in and steering input is unlike anything I have driven so I am trying to work on my timing and commitment. I did find more pace in race two but due to the multiple crashes and yellow flag laps, we did not get a chance to prove much of that. Thanks to the NTE group for all the help this weekend.

Fred Roberts (LB Cup) ][ No. 89 Lamborghini Super Trofeo
After a hiatus from sprint racing due to the events of the past two years, it was great to get right back into it with the Lamborghini Super Trofeo. The cars are proper fast, the field of drivers are skilled and aggressive, and it made for a thrilling first experience for me with the EVO2. I want to thank NTE and our hard-working crew for their efforts in helping me bring home a podium finish at Watkins Glen.