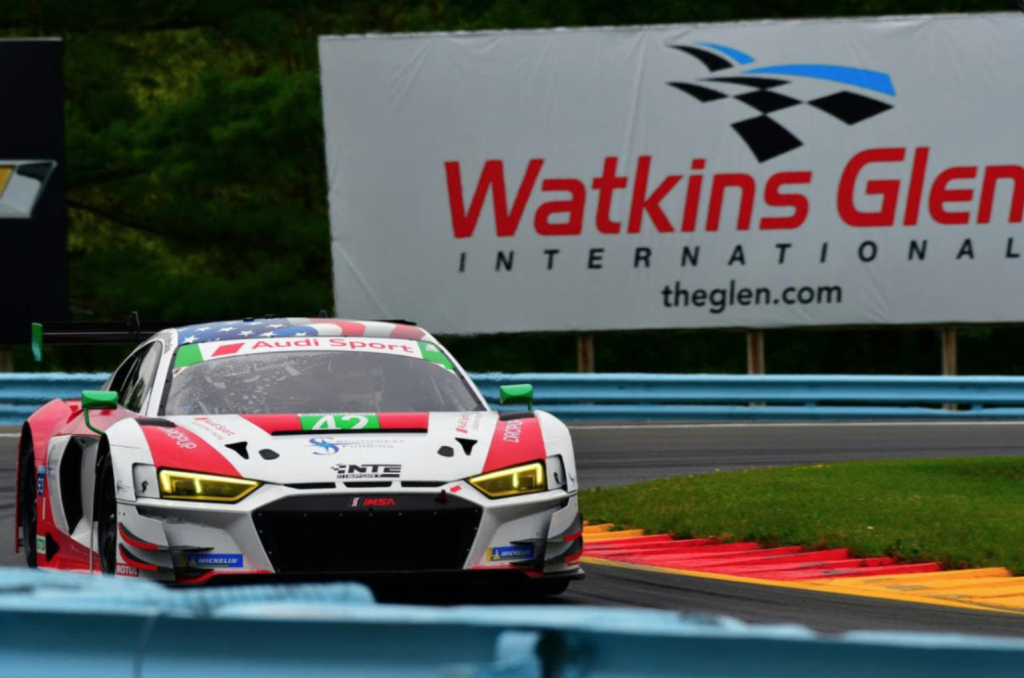 WATKINS GLEN, N.Y. (June 27, 2021) – NTE Sport turned heads this weekend at Watkins Glen International Raceway for the Sahlen’s Six Hours of the Glen. Taking the No. 42 Audi R8 LMS for the second time this year with a new lineup, the little team that could not only showed impressive and competitive speeds all weekend long, but the lineup of Don Yount, Jaden Conwright, and Markus Palttala secured a fourth-place finish in the six-hour endurance event.

“NTE Sport is still a very new team, and so I’m very proud of what we were able to accomplish today,” said Team Owner Paul Mata. “Don, Jaden, and Markus had never raced together before, and we also were unable to test here, but our team did an excellent job engineering the Audi R8 LMS. They gave the drivers a competitive car, and we were able to run upfront and show we have what it takes.”

The team started the year off at the Rolex 24 at Daytona, but struggled with speed and ultimately were unable to finish after the car’s gearbox broke. After several long months of putting together the resources to get the car repaired and get back on track, the team came to the Sahlen’s Six Hours of the Glen ready to race.

Don Yount returned to the lineup, the only driver who carried over from the Rolex 24 six months before. Markus Palttala, his former co-driver on another Watkins Glen-winning effort, joined, bringing with him valuable endurance racing experience. Jaden Conwright was the final piece of the puzzle, having raced with the team previously in the Michelin Pilot Challenge, showing good promise.

Conwright qualified the car on Saturday, holding the provisional pole for the majority of the session before more experienced veterans of the series took the top two positions. Still thrilled with the strong starting spot, Jaden kicked off the race on Sunday and opened the race with a clean, trouble-free stint in the top five. Yount took over in the heat of the day, running a double stint before letting the young rookie take back over. Palttala took his turn from Conwright for the final stretch, running in eighth before climbing his way up to second place. It looked like the race might have been over for the team, after receiving a drive-through penalty for a wheel spin during a pit stop.

Palttala serviced the drive-through penalty, giving up second place to return in eleventh. A late-race caution played perfectly into the team’s hands after the stop. Since the team had just pitted, they stayed out on track while the rest of the GTD field had no choice but to pit for their final fuel stops. As the race went to green in the final 40 minutes, Palttala restarted from second place. While the racing intensified behind him, Palttala was passed by Bryan Sellers for third place, then unfortunately tagged by a faster DPi car. While he was able to keep racing, the bump forced him to give up the podium position.

Despite the near-miss of the podium, the fourth-place result is still worthy of celebration for the young team, which hopes to return to the IMSA WeatherTech SportsCar Championship later in the season.

Jaden Conwright
The weekend went amazingly well. We went into it with basically no testing, and none of us had driven together on this team before, and I had never been here before. We had no expectations going in. We came in to just do our best and get the best possible result. After practice, we saw we had a good pace in the car, and then followed up with a good qualifying session. We had a bit of pace and made a few mistakes; I made a mistake myself, but we had the pace for the podium. Even the result we had was amazing.

Don Yount
Jaden did a great job in qualifying putting the car upfront. He did such a great job, especially for his first time qualifying in GTD. We had great runs at the beginning of the race. I did a double stint in the middle and then gladly got out under yellow. Jaden got back in and Markus brought us home in a good position. The best I even hoped for heading into the week was a top-five, so I’ll take a podium run and a fourth-place finish all day long.

Markus Palttala
I’m super positively surprised about our end result today. We threw a bunch of people together for this weekend, many of whom I had never met before. We did a brilliant race. We started third, and I was third at the last restart. A podium would have been great, but looking back three days ago, if someone said we’d finish fourth, I would have happily taken it with both hands. Of course, you want to win. Losing a position, in the end, I got a little lucky in the end with that DPI. It was unlucky, but I got away.