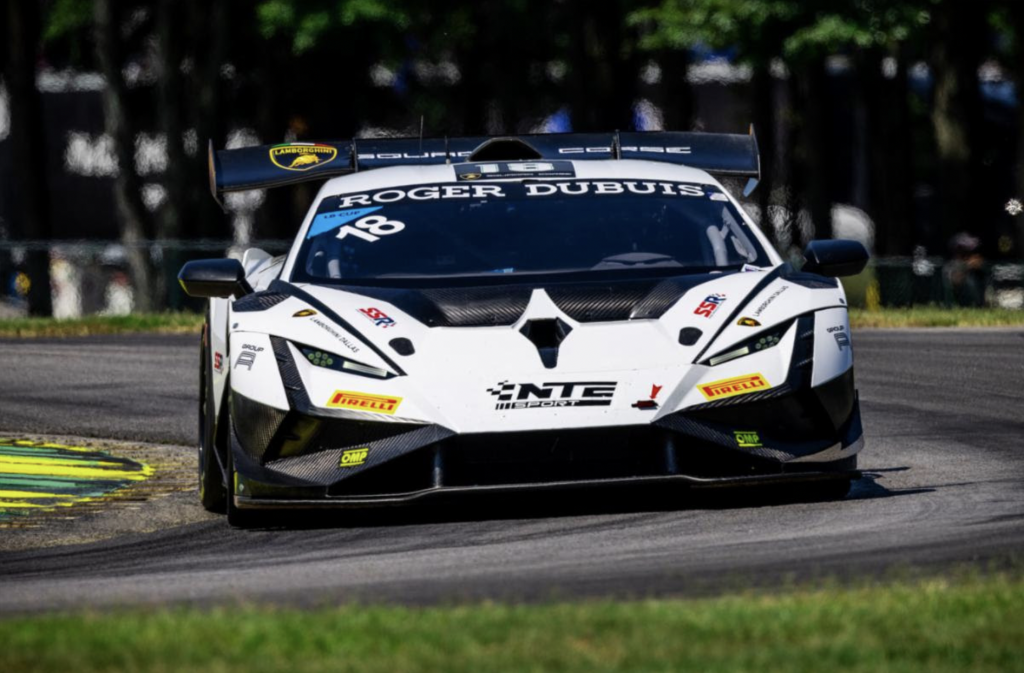 ALTON, Vir., (August 28, 2022) — Professional sports car racing team NTE Sport felt the heat at this weekend at VIRginia International Raceway (VIR). The NTE/SSR IMSA WeatherTech SportsCar Championship and NTE Sport Super Trofeo programs continue to have highs and lows, with two Super Trofeo North America podiums keeping team’s momentum going forward. On Saturday, the No. 89 fought an incredibly tight battle in Super Trofeo, ending with a third-place finish in LB Cup, and on Sunday, the No. 18 had a third-place finish in the LB Cup class. A mechanical issue in lap one brought the NTE/SSR GTD Lamborghini out of the race, bringing the weekend to a frustrating conclusion.

“Racing can be so heartbreaking,” said team owner Paul Mata. “We have a lot of pace in both our WeatherTech and Super Trofeo programs. We’re still working on the details that will allow us to full showcase what we’ve got. In Super Trofeo, it was great to have Fred Roberts back on the podium and to see Tiger Tari get his first podium.”

WeatherTech SportsCar Championship
Starting the VIR weekend focused on the setup and balance of the car, the team experienced a surprise with a dead brake master cylinder at the start of practice session two on Saturday. Glad to have that happen before the race, the crew spent most of the session on the repair and was able to get both Marco Holzer and Jaden Conwright out for some final practice laps.

After an unfavorable qualifying for the No. 42 NTE/SSR Lamborghini Huracan GT3 Evo, Conwright began Sunday’s race in ninth position in GTD. The bad luck for the car contiued as the field wrapped up the final pace lap and charged towards the green flag. The motor blew in lap one, resulting in the car going off track at turn 14. Conwright was able to limp the car under its own power toward the garages, but due to the failure of the motor, the team was forced to withdraw from the race.

Next up for the IMSA WeatherTech SportsCar Championship is the final event of the season. The Motul Petit Le Mans is September 28-October 1 at Road Atlanta. NTE/SSR’s IMSA WeatherTech program plans will be announced at a later date. For event information, visit imsa.com.

Super Trofeo North America
Just as quickly as the green flag waved for Super Trofeo race one on Saturday, an incident occurred at turn one at the front of the pack. All three NTE Lamborghinis remained clean through the situation and continued on, focused forward to the next 40 minutes of racing. In the No. 42, Lucas Petersson started fifth in class and gained a position in ProAm while Tiger Tari and the No. 18 gained a position in LB Cup from a seventh-place starting position. Fred Roberts started in sixth, and climbed a spot early No. 89. chipping his way into the top three positions of the LB Cup class. After the pit window closed, Tari spent the remainder of the race on pace and maintaining position, finishing sixth in LB Cup. Keawn Tandon took over the driving duties of the No. 42 from Lucas Petersson in the mandatory stop, starting his stint fourth in ProAm. He spent the end of the race clearing out of class traffic and closing the gap to the No. 8 O’Gara Motorsport car in third. Tandon took the checkered flag side-by-side with the No. 8, just tenths away from claiming a podium for the duo. Roberts kicked up the heat in the second half of the race, in a battle between first, second, and third with No. 49 Precision Performance and No. 13 O’Gara Lamborghinis. Even in the last lap when he incurred a hard hit from behind at Oak Tree and a cut tire, he took the finish line third in LB Cup, claiming another podium position this season.

Due to qualifying results for race two, Sunday started out stronger for the trio of Lamborghinis. Another, yet smaller race start incident at turn one kicked the race off with the type of action that would be seen throughout the remainder of the Super Trofeo race. Tandon had the starting stint in the No. 42 and from fourth, he climbed to third and then second due to both competitors in front having incidents, bringing them down in position or out of the race. After a delayed pit window opening, Petersson took the wheel of the No. 42 from Tandon, reentering the field at fourth in class, where the car maintained position for the remainder of the race. Tari in the No. 18 and Roberts in the No. 89 were sixth and seventh respectively in LB Cup coming out of the pit stop. Within a few laps, Roberts had an ABS issue and brought the No. 89 back to the pit box where he conducted a power cycle to clear the system. Roberts reentered the field eighth in class, where he finished the race. Tari chipped his way through positions, bringing the No. 18 to fourth in LB Cup for his best finish yet. Due to a time penalty for the competitor in third, Tari was swept off to the podium to claim his first trophy in Super Trofeo.

The team will make an announcement regarding their Super Trofeo World Final plans at a later date. For event information, visit the Lamborghini Super Trofeo North America website.

Tiger Tari (LB Cup) ][ No. 18 Lamborghini Super Trofeo
I am above the clouds and have to give credit to many people who have something to do with such a strong run this weekend. From my team to my friend Todd, who helped me at the last race, the IMSA family starting at John Doonan, the Lamborghini with Chris Ward, the whole NTE team and Star Spangled Racing. Everybody had a little hand in it, it’s not just the race – it’s everything before the race. The race is just the show part and so much goes into the before the show. The racing community is very supportive, and people are very kind to each other, but on the track we all want the same thing.

Keawn Tandon (ProAm) ][ No. 43 Lamborghini Super Trofeo
Overall, we had some good pace this weekend but definitely still need to work on our pit stops. Our first race we were quick, but our pit stop was slow. In our second race we were up to second place and thanks to continued pit stop practice our pit stop was better, but not as good as the guys behind us, causing us to lose positions. We have a podium in us for sure.

Fred Roberts (LB Cup) ][ No. 89 Lamborghini Super Trofeo
Race weekend number two in the books and the seat time was valuable. After a long battle for first on Saturday, we cut a tire on the last lap to pick up a third place in LB Cup. Sunday, despite qualifying third in class, we again had mechanical issues that forced a pit stop. After reentering, our race pace was faster than the class leaders, but we were out of time. The NTE guys worked really hard to sort out the issues with the car and did a great job. A big thanks goes out to them! On to Portugal next!