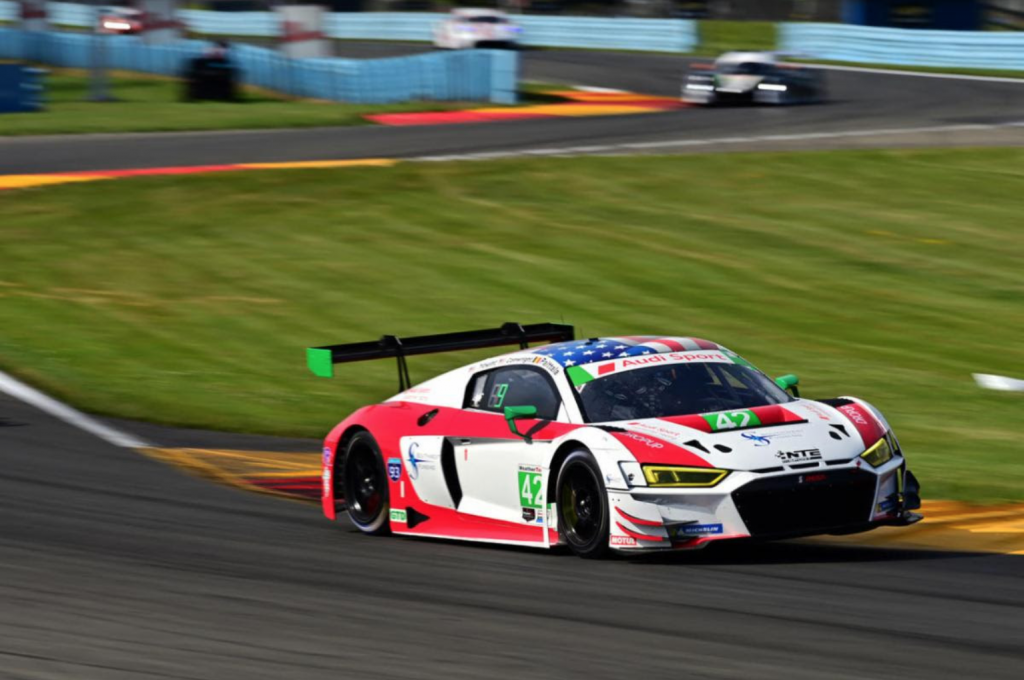 “I’m really proud of what we’ve been able to accomplish in such a short amount of time,” said Team Owner Paul Mata. “Our program is small, but we’ve shown that we’re able to race well and work the strategy in what is a very competitive class. Don and Jaden have really adapted to the car well, and we’re excited to welcome Benjamin and see what we’ve got!”

Yount is the only driver to compete in each of NTE’s events this year, having previous experience in the IMSA WeatherTech SportsCar Championship, Michelin Pilot Challenge, and Prototype Challenge. Conwright made his IMSA debut this year at Watkins Glen International, where his talent was first showcased to the field in his third-place qualifying session. The pair, with Markus Palttala, finished fourth, showing a competitive performance for a podium finish.

At 22 years old, Benjamin Hites will make his IMSA WeatherTech debut next weekend. The Chilean race car driver first appeared in sports car racing in 2017, competing in the Top Race Series Argentina, where he stayed for two years. By 2018, Hites was competing in the United States, participating in Ferrari Challenge North America, earning two wins and five podiums. He continued to gain experience around the world, participating in the Intercontinental GT Challenge, the Fanatec GT World Challenge Europe, and the International GT Open, where he celebrated a win in September.

Forty-three entries are slated to run in the final race, and the GTD class will be comprised of 15 cars, each also running three drivers. While the partial-season team is not in the hunt for any championship titles, the group behind the No. 42 Audi will still be eager to finish the season on a strong note to provide momentum into the 2022 season.

“Even though we’re putting a lot of resources into the final race of the year, we’re also working hard to set up a strong 2022,” said Mata. “We are working on a couple of various things for next season, and hope that a great finish at Petit Le Mans will provide a strong momentum into the new year.”

Motul Petit Le Mans will take place from 12:10 pm to 10:10 pm Eastern on Saturday, November 13, with live coverage beginning on NBC, then switching to NBCSN starting at 3:00 pm. IMSA Radio will offer live, commercial-free audio coverage of qualifying and the race. International listings and full event information can be found on imsa.com.

Don Yount
I’m looking forward to a return to Atlanta to run in Petit Le Mans. I’m excited to see what November weather brings to the race. I know NTE and my co-drivers will bring their best game to the event.

Jaden Conwright
I’m very thankful that everyone from NTE Sport is giving me another opportunity to run with them again in the IMSA WeatherTech Sportscar Championship in their Audi R8 GT3. Like Watkins Glen, I haven’t been to Road Atlanta before in my career, but I’ll be looking to continue to build off the momentum that we created earlier this year. It looks like it’s shaping up to be a grueling and competitive Motul Petit Le Mans, but there’s no doubt that we have the right guys and equipment to take on the challenge and aim for that podium that we came just short of in Watkins Glen!

Benjamin Hites
I’m really happy to join NTE for Petit Le Mans and to make my IMSA debut in such an important race. I would like to thank Paul and the entire NTE Team to trust me the Audi R8 LMS GT3 Evo, and I’m looking to achieve a good race result alongside Jaden and Don.

This weekend will mark a new chapter for Kerong Li, born in Xian, China, and now a student at Boston, University. Li started his motorsports career at the Primal Racing School in Atlanta, Georgia, then graduated to race radical cars. He advanced to the F4 US Championship and this weekend will make his sportscar racing debut in Friday’s Michelin Pilot Challenge race.

Born in Madagascar but now residing in Atlanta, Georgia, Jean-Francois Brunot will get to enjoy the home-race experience this weekend. His lifelong passion for competitive racing saw him racing his first Motocross bike at six years old and karting by age twelve. He climbed the U.S. sports car racing ladder, obtaining success in SCCA, NASA, Mazda MX-5 Cup, and more before joining the professional ranks of IMSA, 24H Series, and various other international sports car racing championships.

The Fox Factory 120 will begin on Friday at 1:10 pm Eastern, airing live on imsa.tv and NBC SportsGold’s TRACKPASS. Fans can also listen to live IMSA Radio coverage throughout the weekend and follow live scoring all on imsa.com.