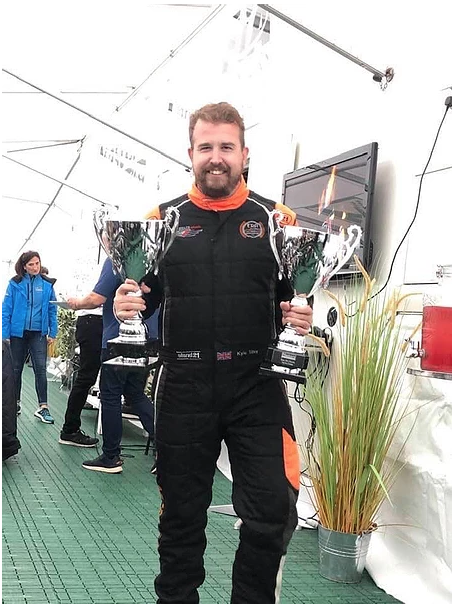 Hello everyone! I’m Kyle Tilley, and I will be at the wheel of the #18 Era Motorsport Oreca 07 LMP2 this coming weekend for the Rolex 24 at Daytona. I’m there not just as a driver, but I also own Era Motorsport! It’s a big weekend for me personally and professionally; I can’t wait!

Prior to my life as a team owner I was fortunate enough to race professionally for the past seven years in a variety of cars all across the world. However, my racing journey started at the tender age of six when my father, Charles (also an accomplished open wheel racer) first took me to Bristol Karting Center. I don’t remember much about it other than being 100% hooked. From there I progressed into outdoor karting where I competed until the age of 13. Being the fat kid (not much has changed!) my success in karting was always limited until it rained, I lived for those wet weather races; still do!

Around the age of 14 I took up cycling as a way to keep fit, initially mountain biking which turned into road cycling. As with everything I do it ended up becoming competitive. I started racing regularly, going on to win multiple national championships both on the road and later the velodrome. This success saw me invited to join the Scottish Cycling team and the Great Britain Olympic Development Program. The cycling, although not cheap, was more financially viable for my parents, and it was there my attention focused until the age of 18, where I spent the entirety of my student loan on a Formula Ford. I turned my back on a potential cycling career (much to my Mum’s displeasure!) to go racing and haven’t looked back since! Cycling is still something which plays a large part of my training, and I have even been known to enter the odd race, but these days it’s strictly for fun!

My first year in Formula Ford saw my Dad and I run the car ourselves. With a couple of half decent results, it cemented in my mind that this was what I was going to do, regardless of what it may take. For my second year in Formula Ford I stepped up to a professional team running a Van Diemen, I rounded out the year with 11 race wins from 12 races, with a lap record, 12 fastest laps, and 8 pole positions. I had worked a total of three jobs (racing instructor, delivery van driver, and shelf stocker) and sold nearly everything I owned to make it happen, the sense of achievement was huge. However, I was tapped out financially, couldn’t work any more hours and I had run out of items to sell!

After failed attempts at Formula 3, taking out yet more loans and the family remortgaging the house, I found a home in sportscar racing. Now under the guidance of Rick Gorne I ended up able to make a career from being a super sub, driver coach, and development driver. After an event at Spa, and several closed doors, Rick and I decided I needed to go to the land of opportunity, USA!

I moved to America in 2013, since then I have competed in Grand Am, IMSA, and Pirelli World Challenge, a quiet season in 2015 allowed me to build up my coaching business which laid the groundwork for Era Motorsport. I was spending more and more time working with clientele who owned historic race cars, and was not prepared to drive them, when I voiced my concerns on car prep to a client he responded that I should set up my own business, so I did! Era Motorsport was born in March of 2018 and it’s been flat out ever since!

Through Era Motorsport, I have had the honor of driving some of the fastest and scariest race cars in the world, from a Ferrari Dino 206 at Philip Island, to Historic F1 at Spa; and now current LMP2 at Daytona! I can’t thank our clients, staff, friends and my family enough for all the support shown to me throughout the years. It’s been a ride and we aren’t stopping now.