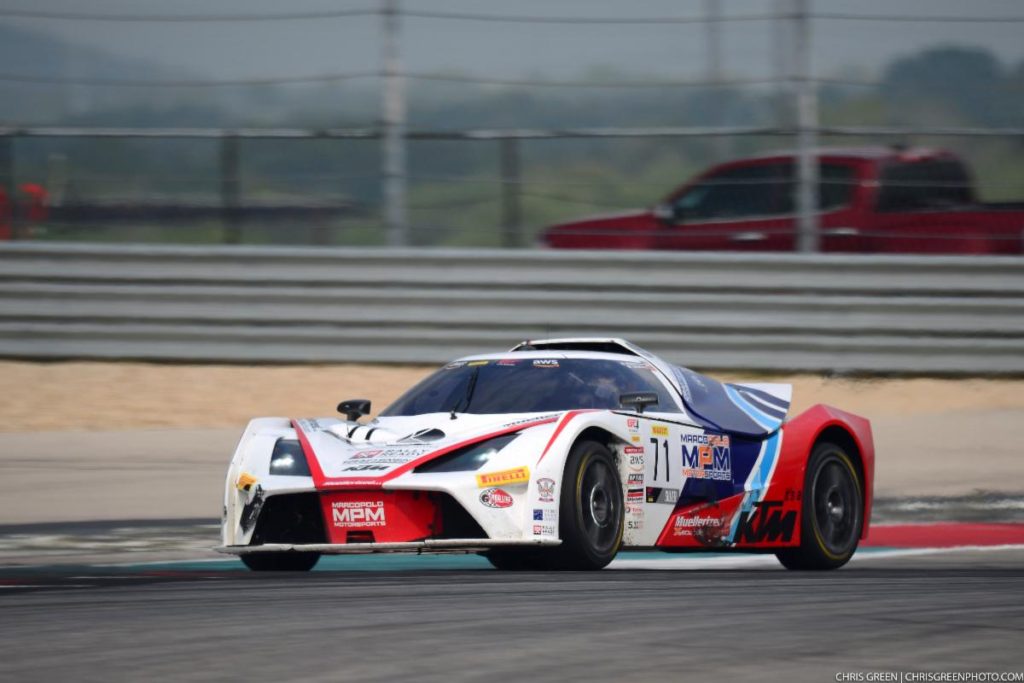 INDIANAPOLIS, Ind., (September 29, 2020) – The fight for the GT4 America championship title in the SprintX Silver class has come down to the season finale event at Indianapolis Motor Speedway. This weekend, Nicolai Elghanayan and Mads Siljehaug, drivers of the No. 71 KTM X-BOW GT4 Evo, will participate in two final races of the 2020 season at the iconic circuit. The team will also run a second car for the weekend, with drivers Vincent Piemonte and Dieter-Heinz Kijora in the No. 74 KTM X-BOW GT4 Evo in the Am class.

In what has been a highly unusual year for the world, as well as professional sports, Marco Polo Motorsports has shown remarkable persistence all season to enter the final round standing third in the SprintX Silver Class driver and team championship points.

The new 2020 KTM X-BOW Evo was built in Santa Ana California by Muellerized… X-BOW Sales and Support before the season’s start, but due to SRO America’s homologation testing and approval process happening after the first event of the season, Marco Polo Motorsports had run the previous year’s car for the weekend. Despite the last minute shuffle, Elghanayan, Siljehaug, and the entire team performed strong, starting the season off with two podium finishes in their SprintX debut.

Immediately after the opening rounds at Circuit of the Americas, the COVID-19 pandemic halted normal life in the United States, pausing sports car racing for several months. The series resumed operations almost four months later in July at VIRginia International Raceway, where the team was finally able to debut the new car. While the weekend was filled with the standard teething issues that come with a new car, the California-based squad was able to close out the weekend with a top-five finish.

From there, Marco Polo Motorsports was able to resume a normal testing and racing schedule, making further improvements on and off track netting two wins and five additional top-five finishes to bring the tally up to eight total. Entering into the final event, just 35 points separate Elghanayan and Siljehaug from Colin Mullan and Jarrett Andretti, the SprintX Silver points leaders. With 25 points awarded for each win, the KTM duo are still in the fight mathematically, but will need to finish several positions above the Andretti drivers, as well as the ST Racing pair of Nick Wittmer and Harry Gottsacker.

SprintX race one will take place Thursday, October 1 at 5:05PM Eastern, followed by the final SprintX race of the season on Friday, October 2, at 8:00AM Eastern. Both races will air live on youtube.com/GTworld as well as tape delayed on CBS Sports Network October 15th at 9:00PM ET. For full event information, visit gt4-america.com.