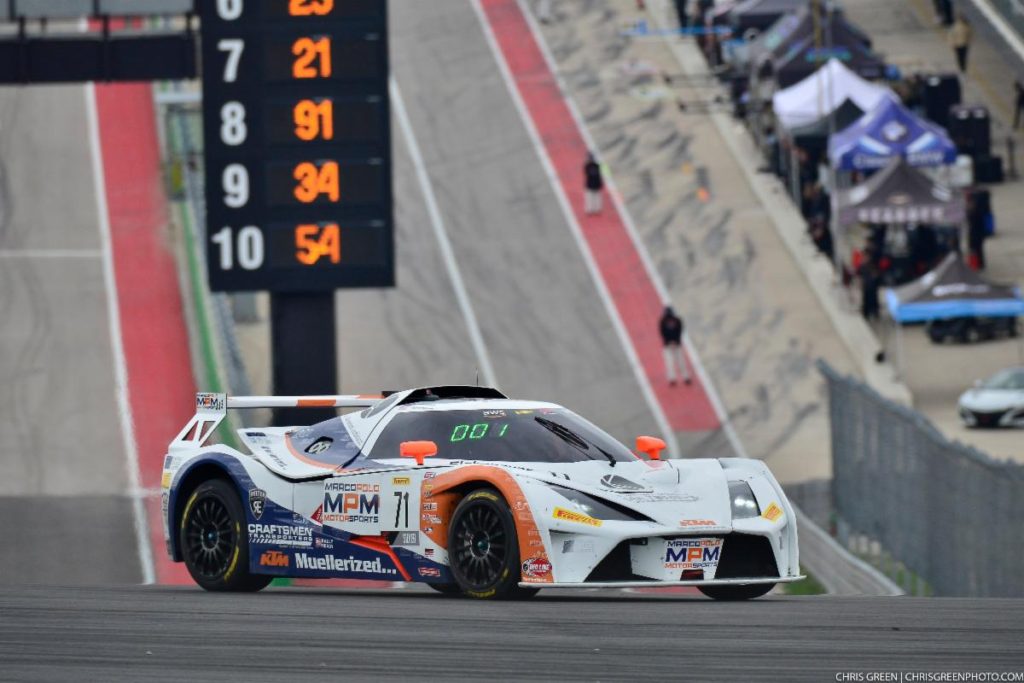 AUSTIN, Tex., (March 9, 2020) – Sports car racing team Marco Polo Motorsports got the 2020 GT4 America season off to a strong start last weekend at Circuit of the Americas in Austin Texas. The No. 71 KTM X-BOW secured podium finishes in both races with drivers Nicolai Elghanayan and Mads Siljehaug, putting them fourth in the GT4 America Silver Cup class championship standings. Due to pending homologation for the 2020 KTM X-BOW, the team reverted to running the 2019 KTM race car against a highly competitive field of sports cars.

“We’re very proud of the results we brought in this weekend,” said team owner Jeff Elghanayan. “While we didn’t want to start the new season off with last year’s car, our team did a fantastic job making the car competitive against this field. Nicolai and Mads have shown that they’re a great driving pair, and they’ll only get better with each race.”

Early in the weekend, the team initially faced small setbacks while setting up the KTM X-BOW, but the team partners at Muellerized… and Reiter Engineering were able to properly diagnose the issues and fix them in time for Saturday morning’s qualifying session. Nicolai Elghanayan set the fastest lap time in the field, securing overall pole position for race one. Mads Siljehaug followed suit and secured a first place starting position in class and sixth overall for race two.

Elghanayan got race one off to a strong start to race one, leading the field by 1.521 seconds after three laps. As the tires came up to temperature, the field was brought back together, and the No. 71 began running in a three car battle for the lead. Elghanayan pitted from third for a mandatory driver change, and Siljehaug took over. The team lost some positions in pit lane, and Siljehaug rejoined in fifth in the silver class. Over the next ten minutes, he worked his way back up to the leading pack, and made the pass for second with in the final turn of the final lap. He finished his first GT4 America race, and his first race in North America, in second.

“We ran a really good race and although it wasn’t as good as the qualifying went, both Mads and I drove really well,” said Elghanayan. “I couldn’t be happier. We’ve kicked off the season in a great way, and have earned some solid championship points. I’m very excited for race two.”

Race two got off to an thrilling start, as Siljehaug made a pass in the opening turn then had an exciting battle with Robby Foley and his Aston Martin for position. The two raced side by side, and moments later, contact from another car sent the KTM spinning. Siljehaug recovered and kept the car clear of an damage and rejoined in ninth overall. A full course caution packed the field back up, and the KTM raced in a competitive pack until the pit window opened. One of the first cars to pit, the KTM changed drivers, and Elghanayan continued the climb back up through the field, at one point passing two cars in one turn. By the race’s conclusion, he brought the car up to third in class, earning the team their second podium of the race weekend.

“The race was a bit unfortunate with the bump we had in the beginning but we had a really good driver change, and we were able to crawl our way back up,” said Siljehaug. “It’s not the kind of podium that we want but we’re happy with the way we finished. In terms of a points weekend, it was a great weekend for us. We’re looking forward to Long Beach.”

The Grand Prix of Long Beach will be a home race weekend for the Laguna Beach based team, who will hope to debut the 2020 KTM X-BOW GT4 EVO. The three day street festival of racing will take place April 17-19 in conjunction with the IndyCar Series, as well as the IMSA WeatherTech SportsCar Championship. For event information, visit gplb.com.