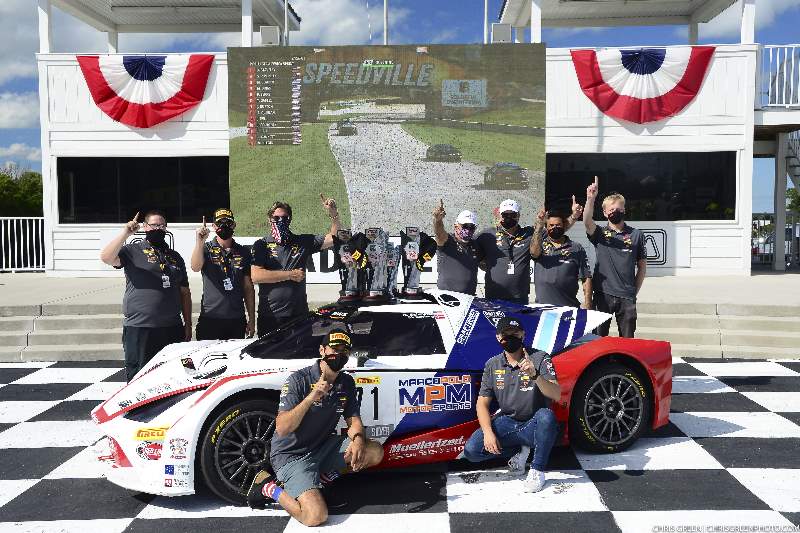 ELKHART LAKE, Wis., (September 1, 2020) – Marco Polo Motorsports celebrated another successful weekend in the GT4 America championship, building on the momentum of a strong 2020 debut for the new KTM X-Bow in North American sports car racing. Over the weekend drivers Nicolai Elghanayan and Mads Siljehaug not only earned three podiums, but the pair earned the overall win on Sunday at Road America, moving the duo up to third in the championship points.

After recent tests in California, and a strong run at the previous rounds at Sonoma Raceway, Marco Polo Motorsports came into the weekend with a strong package for the four-mile circuit. While the two long straights were not best suited for the KTM machine, the car loved the 14 turns, allowing both drivers to put on an impressive show, making passes only the KTM was able to complete.

“The car was unreal this weekend,” said Siljehaug. “We finally got it really dialed in. Good teamwork, preparation led by Muellerized…, and our driving, it all just fit together. That’s why the car was so fast. When it was our time to show what we had, everything was in our favor.”

The most impressive performance of the weekend came in the final race, where the No. 71 KTM X-Bow led every lap from pole position to the checkered flag. Siljehaug immediately pulled away from the field on the start, but an early-race caution period brought the field back up to the race leader. He continued his strong performance at the restart, instantly putting space between him and the next cars back. Elghanayan took over during the mandatory pit stop near the halfway point, continuing to hold a nine second lead over the field to the checker flag, earning the team the class and overall win.

“The culmination of KTM, REITER Engineering, and the Muellerized… engineers were able to bring the 2020 EVO KTM X-Bow to life, and this was a perfect venue to demonstrate the versatility of the car,” said Elghanayan.

“I feel so blessed to have two superstar young drivers sharing our Marco Polo Motorsports KTM X-Bow for the 2020 season,” said John Mueller of Muellerized… “We did a three-hour durability test in 106 degree weather after the costly failures while leading at Sonoma, and we arrived at Road America extremely focused and well prepared. I am so happy to see both drivers at their amazing best in our 2020 X-bow, they each drove at an incredible level all week.”

Only two events remain in the 2020 GT4 America championship. The series next returns to Circuit of the Americas September 17-20 before closing out the season at Indianapolis Motor Speedway October 1-3.