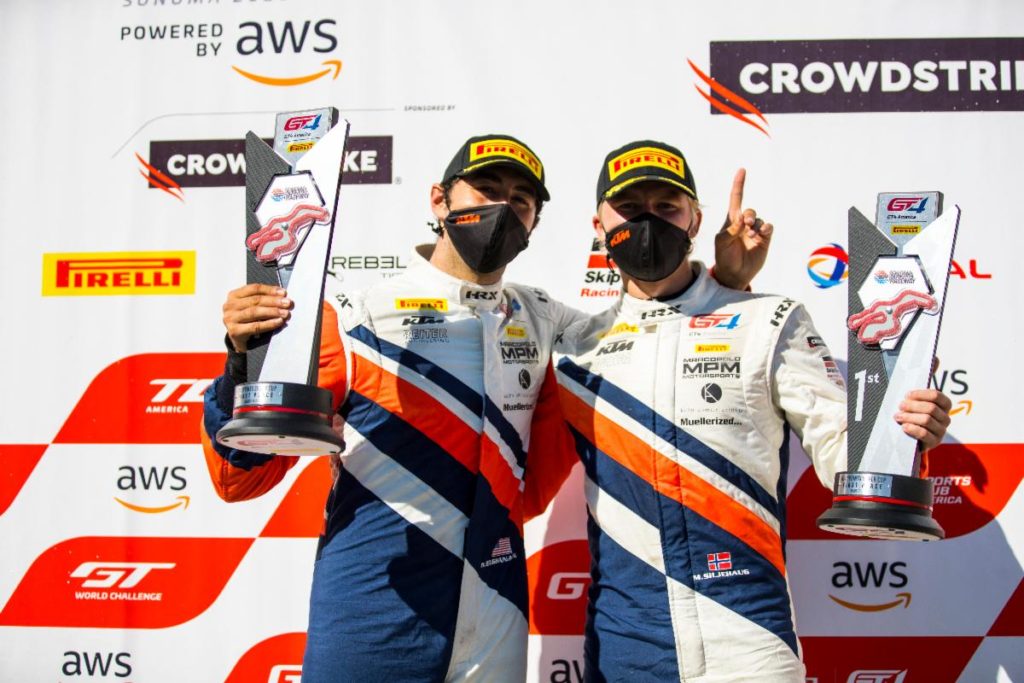 “Winning at Sonoma Raceway was amazing,” said Elghanayan. “Mads and I did a great job keeping the car clean, having no contact or anything. The car worked perfectly, and as a result, we had a commanding lead and the fastest race lap. It was a great race and we hope to have more like it at the next rounds at Road America.”

The Laguna Beach, California team earned the pole positions for race one and two, and the KTM X-BOW dominated race one until mechanical issues with the electronic wastegate system robbed the team of their lead. They worked overnight to repair the issues, leading the field to green for a second attempt on Saturday morning. Better suited for the cooler temperatures than the previous afternoon, the KTM led every lap of race two, winning by 17 seconds.

The field faced warm temperatures for Sunday morning’s race three, which affected the performance of KTM sports car. Mads Siljehaug started the race in 21st and had an impressive opening run, gaining five positions in the first lap. He continued his charge up the field, facing stronger competition the further up the charts he climbed. By the time Nicolai Elghanayan took over, the KTM began to struggle in the heat, resulting in a 20th place finishing position.

“These are growing pains that are expected with a new car,” said Mads Siljehaug. “Despite the issues, the crew did an excellent job, and the car was unbeatable when everything ran well. We’ll work more on the car and come back stronger for Road America.”

The next round of the 2020 season will take place August 28-30 at Road America in Elkhart Lake, Wisconsin. The event will again feature a triple header for the SprintX championship in an effort to make up for previous race rounds that were canceled due to the COVID-19 Pandemic. For all schedule updates and series information, visit www.gt4-america.com.