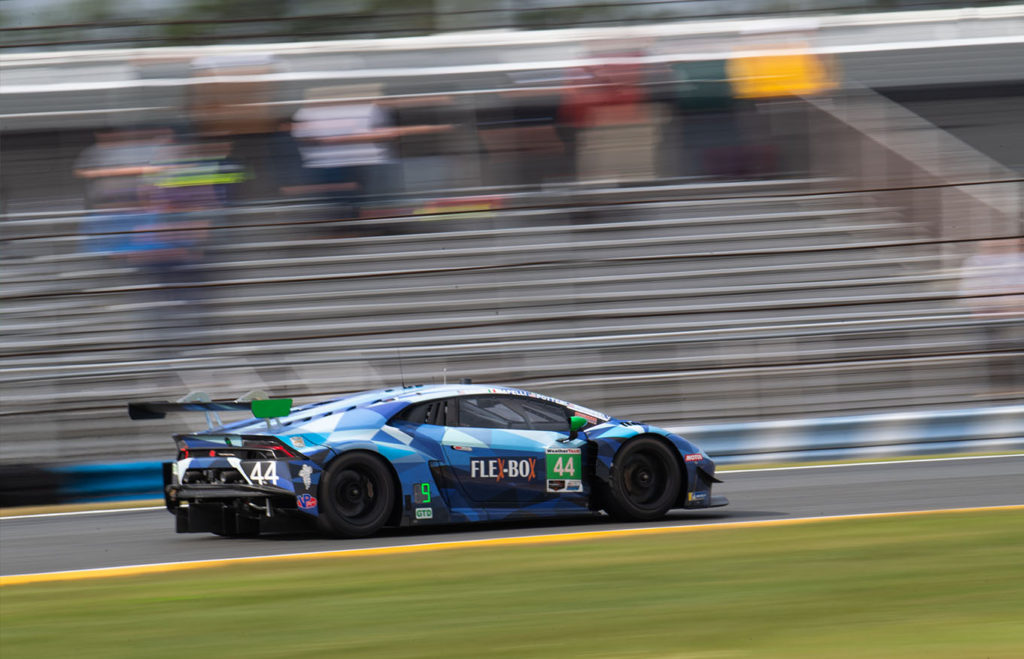 DAYTONA BEACH, Fla, (January 24, 2019) –  Ten years after making their debut as Magnus Racing at the Grand-Am Rolex 24 Hours, the team now known as GRT Magnus will kick off another season in the IMSA WeatherTech Sports Car Championship beginning with the Rolex 24 at Daytona.  In celebration, the team is doing the same thing it has in past years, offering up special movie-themed hero cards and a new twist on 24 hours of GRT-Magnus web content.

Fans should tune into live.magnusracing.com for a GRT Magnus-version of a “webcast” (Ding) and occasional live updates on social media.  Fans at the race should look forward to the continuation of Magnus’ traditional poster with special autograph session giveaways.  Some posters will also be distributed via social media for fans who just can’t do Florida.  All of which will be revealed by following the team’s Facebook, twitter, and Instagram.

The No. 44 GRT Magnus Lamborghini Huracán GT3 came ready after the Roar with no BOP adjustments.  On track, practices have been strong, except for a mechanical issue with the transmission that caused them to miss qualifying.  Despite the setback, the drivers are holding onto their optimism with crossed fingers, and are fresh and ready to race their 11th, 19th, 20th, and something-th Daytona 24.

Leading up to Saturday’s antics, practices have been fruitful for the team.   Drivers yielded solid times during practice, the main exception being the second session on Thursday.  While Marco Mapelli piloted the car, the gearbox decided to revolt, resulting in an early end to the session. The team had to miss qualifying in order to repair.   The gearbox rejoined the team after some coaxing, and night practice again garnered some top times for the team.

The event brings long-time co-drivers Potter and Lally prepared for another season.  Here they can reminisce how together they celebrated the team’s first victory at the iconic Daytona 24 in 2012, beating out 28 other entries in the GT class, and came back to win again in 2016.  The 2016 victory marked the fifth Daytona 24 win for Lally, and his ninth podium.   Combined with Pumpelly’s two wins, the drivers have nine Rolexes between them.  In addition to all the bling and experience, the team is coming to the 2020 event with a striking new blue livery on their No. 44 GRT Magnus Lamborghini Huracán GT3 Evo and completely original optimism.

Andy Lally comes to the 2020 race as the winningest active driver and third for all time wins at the Rolex 24.

“After almost 20 years of racing at Daytona, this will be the first time I ever return with the exact driver line up and car as the previous year,” said Lally. “For our first outing together as the new GRT Magnus effort, I was happy with our speed at The Roar and cautiously optimistic returning for the race that we have a good car to do the job. I’m pretty stoked.”

For Pumpelly as well, this weekend’s run will make almost two decades of competing in the Rolex 24 At Daytona, with 18 already under his belt.

“This will be my 19th Daytona 24 but this will be the first time I have returned with the same driver line up and car as the previous year,” said Pumpelly. “The GRT Magnus team did a great job at the Roar and I’m cautiously optimistic that we’ll have a good car for the race. Let’s hope 19 is a charm.”

“I’m very grateful to be joining Magnus guys again this year,” said Rolex addition Marco Mapelli. “I’m learning many things every time from their experience, about this race, and U.S. races in particular. I believe, with the GRT partnership, we have a good package to do the job and hopefully we can still improve during the week. Can’t wait to start it.”

Continuing with the trend of making the race difficult to follow for cable subscribers, fans can watch the first hour of the race live on NBC at 1:30PM Eastern, January 25th, before the broadcast jumps between NBC, NBC Sports Network, and the NBC App. All 24 hours of coverage will be available with NBCSN authentication on the NBC Sports app or on TrackPass on NBC Sports Gold. Additionally, fans will be able to tune into unique GRT Magnus content online, throughout the race, at live.magnusracing.com.

“If you read this far into this release, I want you to know that you will find the webcast very disappointing” added Team Somebody, John Potter.