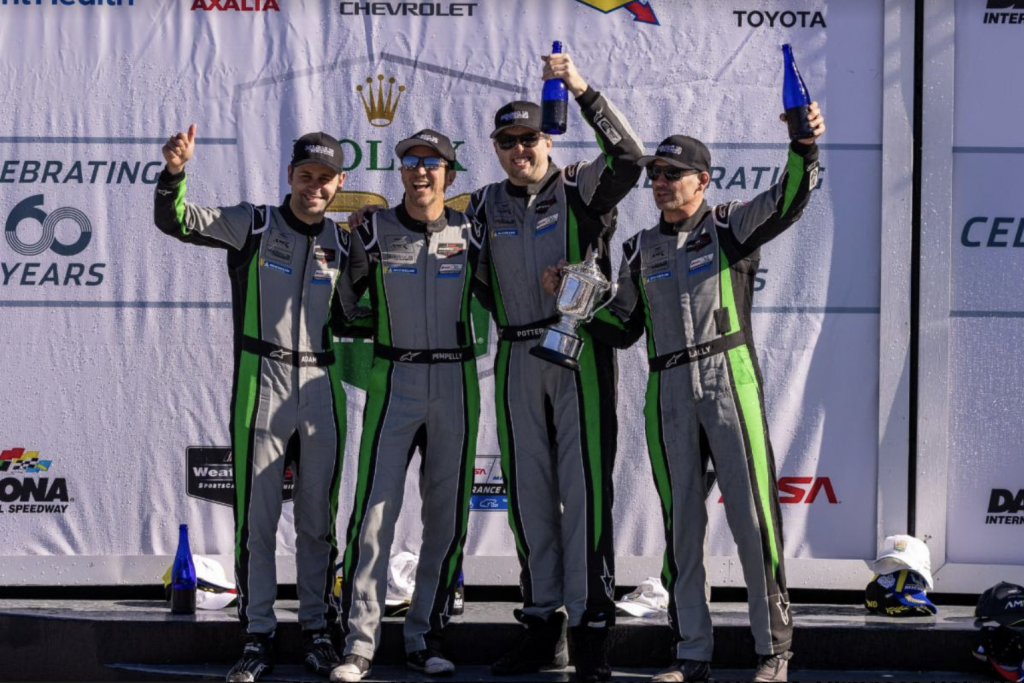 And here concludes the tale of John Potter, King of Magnus and the knights and drivers of the No. 44 Aston Martin Vantage GT3—The Wise Sir Andy Lally, Sir Spencer Pumpelly the Brave, and Sir Jonny Adam, the not-quite-so-brave-as-Sir-Spencer-Pumpelly. Them and their trusty crew went on a great crusade to search for the Holy Rolex at Rolex 24 At Daytona and came in second place, instead receiving a very beautiful shrubbery. The runner-up finish brought Aston Martin Racing their best result at the famed event, leading to much rejoicing from the peasants throughout the land.

“We’ve had to wait for too long to see an Aston Martin finish on the podium at Daytona, and Magnus Racing knows what it is doing when it comes to top-class GT endurance racing in the US,” said Huw Tasker, Head of Customer Racing at Aston Martin. “That the team decided to race with Vantage in 2022 is further evidence of its growing reputation and the overall success of the GT3 programme. The level of competitiveness for Magnus Racing throughout the race is proof that Aston Martin can contend for victory in the biggest endurance races around the world, and we look forward to working with them through 2022.”

The group set out for their sacred quest for the Holy Rolex on Saturday afternoon from ninth place with Potter competing against 21 fearful foe. Despite the 61-car field, the team rode the trusty steed to the top five within the first four hours and remained steady for the majority of the race. Record cold temperatures descended on Daytona International Speedway over the course of the race, but all at Magnus Racing remained strong and brave as they charged forward. As one does over the course of a 24-hour race with 61 cars, the Magnus Racing Aston Martin fell two laps down to tenth position in the GTD class but used the 16 caution periods to their advantage to reclaim ground given to them by the racing gods, getting back on the lead lap.

By the halfway point, the team was back in third place, and Sir Andy Lally took the class lead two hours later. Two hours before sunrise, Sir Spencer Pumpelly found himself in an intense duel while running in second place and spun off track in the Le Mans Chicane. He rejoined in fourth and continued to press on, keeping the car as close to the leaders as possible as the sun came up. Lally took over for the final run, running in third as the checkered flag neared. With flawless pit stops, the team was able to keep the car in position to fight for a podium. With less than 30 minutes on the race clock, the second-place car received a drive-through penalty, moving the Magnus No. 44 car up to second place, where the team finished, earning Aston Martin Racing their best win at the grueling event.

The Twelve Hours of Sebring is next up for the Utah-based team, March 16-19 at Sebring International Raceway. Magnus Racing is slated to only run the four endurance races in the 2022 IMSA WeatherTech SportsCar Championship calendar: the Rolex 24 At Daytona, Twelve Hours of Sebring, Six Hours of the Glen and Petit Le Mans.

Stand by for attack. The oil of many a valiant car shall be avenged. In the name of Beau Barfield, we shall not stop our fight until each one of our foes run behind us and the Holy Rolex returns to whom God has chosen.

Thus ends this chapter in Magnus Racer and the Holy Rolex. In case you don’t know why this release is worded in such a grand fashion, please enjoy the video below.