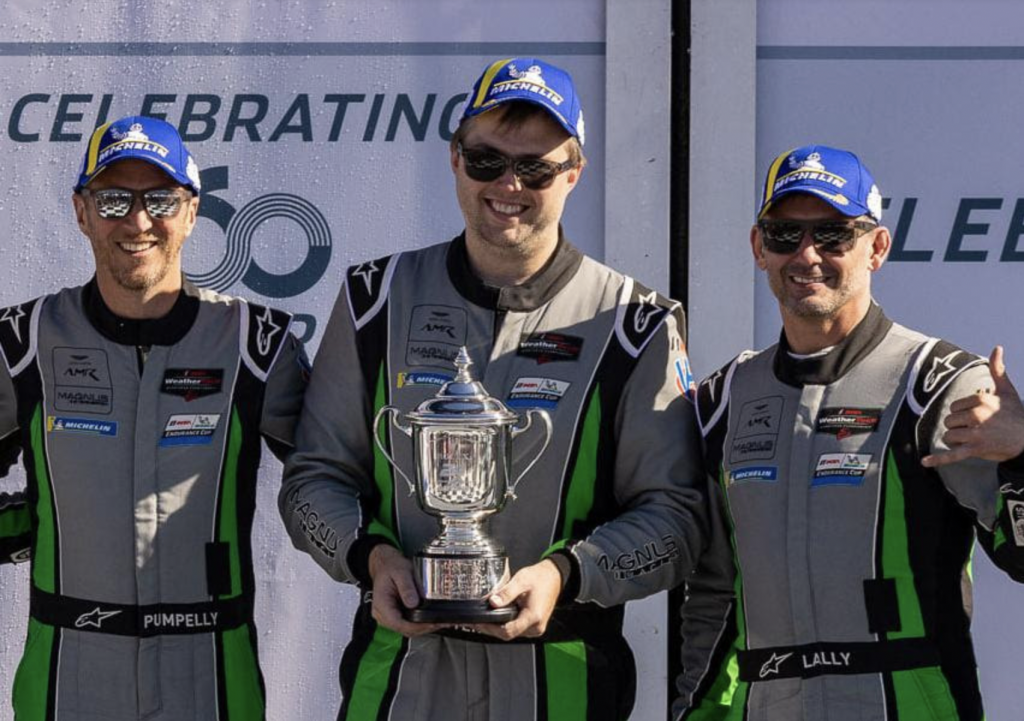 SALT LAKE CITY, UTAH. (December 15, 2022) – With the 61st Rolex 24 At Daytona looming on the horizon, sports car racing team Magnus Racing is ready to reveal a completely shocking driver lineup for the No. 44 Aston Martin Vantage GT3. John Potter, Andy Lally, and Spencer Pumpelly will pilot the Aston Martin in the four endurance events of the IMSA Michelin Endurance Cup. The fourth Daytona driver and the fate of the remaining seven sprint events to be announced at a later date.

The team will be celebrating its lucky 13th year in racing as the team kicks off the momentous occasion with the Rolex 24 At Daytona, January 25-29. Last season, the team put in an impressive performance in their new machinery from their ninth-place starting position to finish second in the GTD class. This year, the team returns with strength in consistency, along with a season of experience under their belts in the Aston Martin and its exemplary support from the British manufacturer.

“I am just excited to back with Aston Martin and their engineering team,” said Team Somebody John Potter. “It’s great to have so many crew returning too. Will be a great Daytona to start the season and I just wonder if we will ever get a clean lap during the entire 24 with so many cars!

Andy Lally’s return to the team brings about a notable anniversary, as the skateboarder who sometimes drives a race car completed his 10th year with the team in 2022 and will return for his 11th this year.

“It’s an honor to be back with Magnus Racing,” said Lally. “John has been a great teammate over the years, and we have had a lot of success together. I’m looking forward to running the Aston for a second season and building on what we learned in 2022.”

Sports car racing champion Pumpelly returns with the team and will compete in his 22nd Rolex 24, eager to become a three-time Daytona 24 At Daytona race winner. Despite the continued success of his nationally known rock band, the Terrible Two, the lead guitarist was able to carve out time to again join the Magnus Racing squad for the 2023 season.

“This season I’m really excited to start racing with Magnus again,” said Pumpelly, or perhaps someone else with the Pumpelly surname. “Everyone is really nice there and Magnus is one of my favorite racing teams. I think we improved from last year. I really like working with my best bud Andy Lally and John is really nice and he does good in the car. And thank you Magnus, that’s all.”

“That’s the most horriblest quote ever,” concluded Lally.

The friendly and fierce trio will kick off the 2023 season with Magnus Racing once again in January. The field for the Rolex 24 At Daytona hit capacity during the off-season, prompting series officials to recreate a reserve list for the at least nine entries that didn’t make the 61-car field. The literally packed event will begin January 20th with the Roar Before the 24, the first full-season test for the series before official race activities begin on Thursday, January 26. The 2023 Rolex 24 At Daytona will begin on Saturday, January 28 at 1:40 PM. Magnus Racing will reveal further event details in the coming weeks.