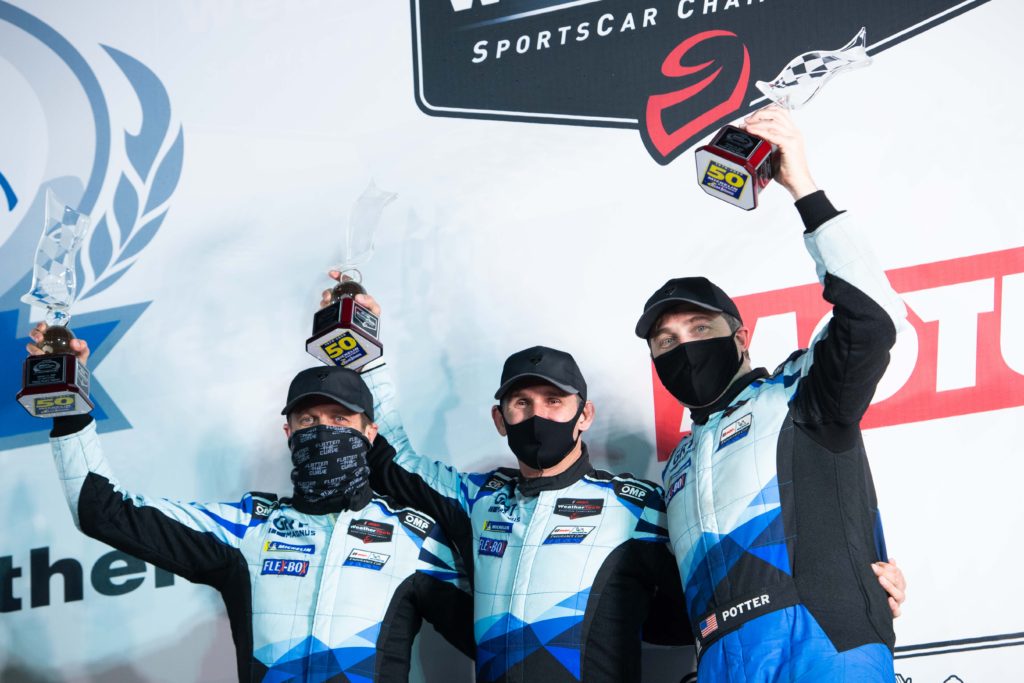 John Potter started the 10-hour IMSA WeatherTech SportsCar Championship race from twelfth, following a highly competitive qualifying session that saw the fastest laps of the entire GTD class within 1.1 seconds. Although he reported light contact from another car on in the opening laps, all appeared fine, and he continued on to gain positions through clean and consistent laps. By the first full course caution 25 minutes into the race, he had already climbed to tenth, and at the conclusion of his triple-stint run, he had brought the team up to eighth.

Following Potter’s run, Spencer Pumpelly and Andy Lally rotated through, trading the driving duties back and forth. Though the race saw a few more cautions in the middle of the event, for the most part, the competitors had settled in and the racing was fairly tame. However, tensions increased in the last two hours, as the final rounds of pit stops were completed, and tire and fuel strategy paid off.

Just after Lally took third place from the No. 12 Lexus of Townsend Bell, two cautions came out in the final ten minutes. The first of which bunched the field back together for a suspenseful restart, but the race went back to caution a lap later following another incident. Lally finished the race under caution, celebrating a well-earned third place finish with GRT Magnus Racing and his co-drivers.

Just two races remain in the IMSA WeatherTech SportsCar Championship. The series will head to WeatherTech Raceway Laguna Seca October 20 to November 1, then conclude the season with the Twelve Hours of Sebring in November.

After starting the season off on the podium, it was great to get back up there at a race as challenging as Petit Le Mans. Our team has shown they’re one of the best over the long races, and I commend everyone for doing such a great job. We had a lot of green flag laps, and we were able to be there in the end to battle for the podium. The car ran strong, and I have to congratulate Lamborghini on capturing the Manufacturer’s championship. We still have two more races to go, and l look forward to sending the season strong.

I love close races where it is going to be a very scrappy hard fought battle. Nothing energizes me behind the wheel more than that. I was able to make four passes for position during my last stint, and the final one for the podium with just 14 minutes remaining in a ten hour race was something I’ll remember for a while. We have had some horrible luck the last bunch of races but today everyone was flawless and did an amazing job. I owe a huge thank you to not only amazing drives for my teammates, but excellent car preparation, set up, strategy calls and engineering as well as some really solid pit stops. The crew put their heart into this one during tough times. I’m looking forward to skating and racing at Laguna in a couple of weeks!

Spencer Pumpelly
This was a fantastic team effort. We had a great car, our pit stops were perfect, the strategy was spot on, and John and Andy were amazing on track. John started us off with great speed, moving us up right from the start and Andy had an incredible stint to claw us past two cars in the final minutes to put us on the podium. I’m really proud of all the GRT Magnus guys and what they accomplished this weekend.