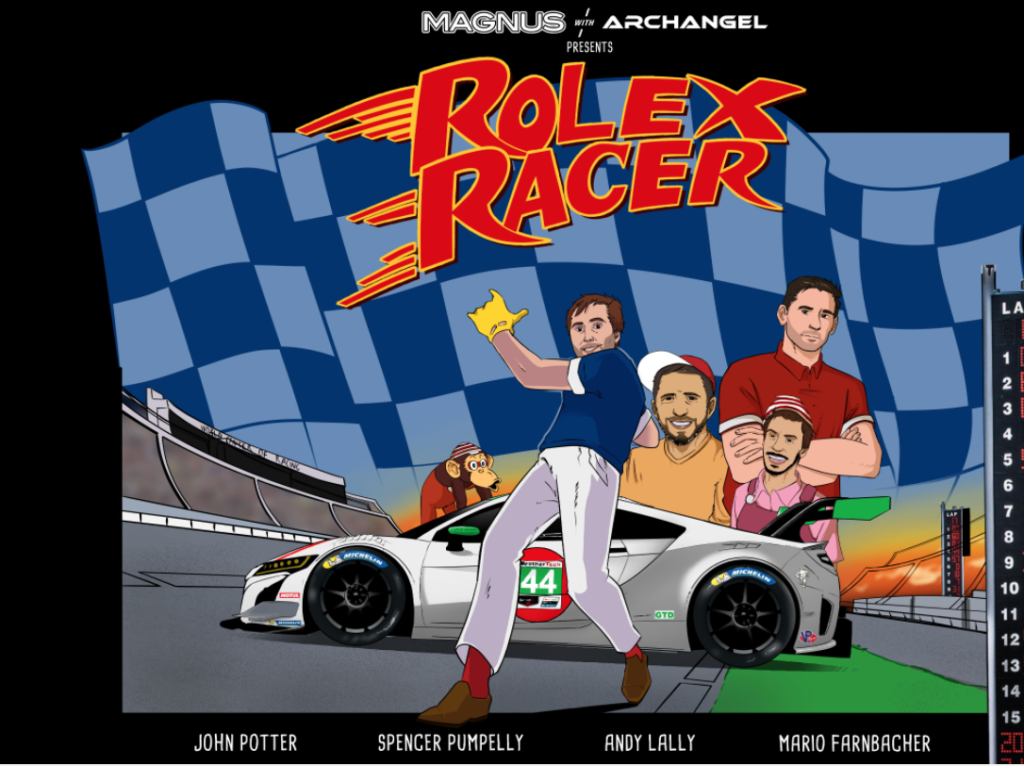 DAYTONA BEACH, Fla., (January 27, 2021) – After driving fans crazy by hiding images of their No. 44 Acura NSX Evo throughout the Roar Before the 24, IMSA WeatherTech SportsCar Championship team Magnus Racing has finally revealed their 2021 livery and special Rolex 24 At Daytona poster. The Magnus Racing with Archangel Acura, which will henceforth be known as Mach 44, will sport a grey, white, and red livery to bring some fun during these gloomy times.

Over the course of the Roar Before the 24, the team took great joy in redacting, obscuring, or blurring images of the No. 44 Acura, even to go so far as deleting buzz-killing social media comments from cold-hearted but smart fans who had the sense to google images of the car, posting to the team’s page to spoil the fun. But alas, the time has come for Rolex Racer to make his big debut.

Rolex Racer will race into your hearts this week for the 59th Rolex 24 at Daytona, the first official race of the 2021 IMSA WeatherTech SportsCar Championship season, unless you count last Sunday’s qualifying race as a race—which is not to be confused with last Saturday’s qualifying session for the qualifying race.

John Potter will make his anime debut, starring as Rolex Racer, the daring driver of the Mach 44. Full-season driver Andy Lally will play Pops Racer, despite us confirming he is in fact not John Potter’s actual father, or anywhere old enough to be. Perhaps he landed the role because Pops is a former champion wrestler, or maybe it’s because the character is constantly blowing gaskets. The role of Rolex’s best friend and mechanic, Sparky, will be played by Mach’s North American Endurance Cup driver, Spencer Pumpelly. Mario Farnbacher, the youngest of the drivers, rounds out the cast as young Spritle, Racer’s little brother.

Magnus with Archangel’s Rolex Racer poster will feature the whole gang, including the Mach 44 and Chim-Chim, the group’s furry friend. Fans who don’t mind visiting Florida can pick up their very own mini poster on site by asking at the Styled Aesthetic merchandise tent in the Daytona International Speedway, while supplies last. For fans unable to attend the event this year, the team will do a small number of future giveaways on their Facebook, twitter, and Instagram channels.