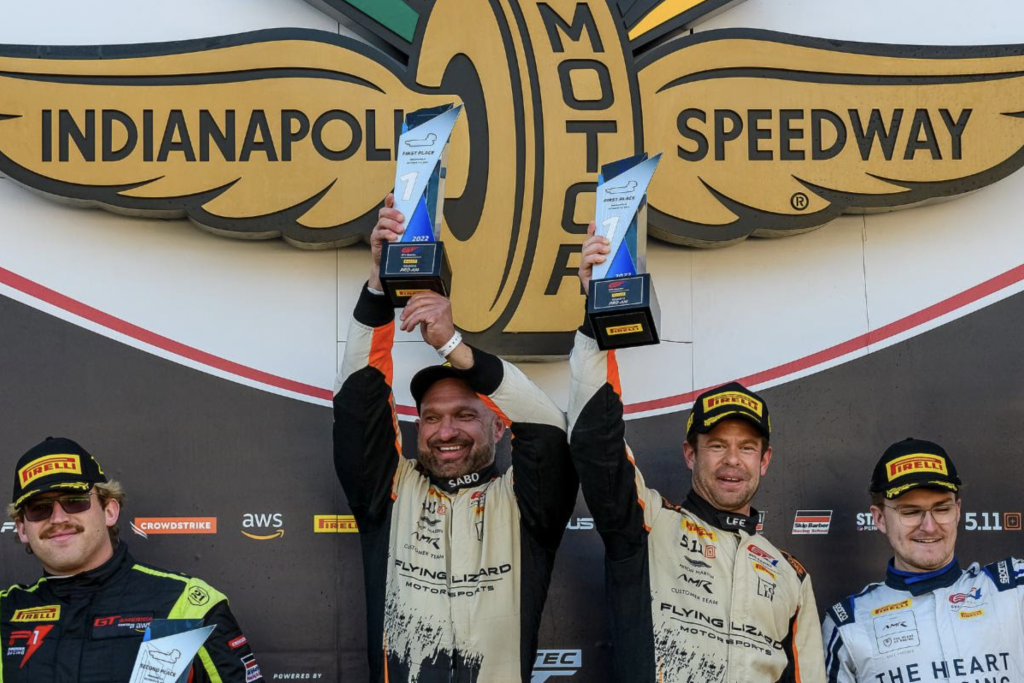 INDIANAPOLIS, Ing., (October 10, 2022) – Flying Lizard celebrated a long-awaited race win over the weekend at Indianapolis Motor Speedway, the site of the conclusion of the team’s championship efforts in the GT America Powered by AWS and Pirelli GT4 America series. The team’s pair of Aston Martin Vantage GT4 cars, driven by Elias Sabo and Andy Lee entered the weekend mathematically eligible to take the championship title in GT4 America, and although the pair missed the title, the team came away with their highly-anticipated race win

GT America Race One
Sabo had a second-row starting position in race one, beginning the afternoon session from third place in the GT4 class. He had less than five laps of green racing when the No. 8 Aston Martin Vantage GT4 suffered contact from another car in turn one. The contact caused damage to the front left suspension, ending the race early for Sabo.

GT America Race Two
Because of the contact in race one, the team conducted lengthy repairs the following day to get ready for Sunday’s race. Sabo and the Aston Martin were forced to start the second GT America race from pit lane. Sabo spent his opening laps catching up to the rear of the field. By the halfway point he passed four GT4-class cars, breaking into the top then. He closed in on the No. 99 of Robb Holland, running four-tenths of a second faster each lap. In the end, he progressed all the way up to seventh place in the GT4 class over the course of the 40-minute race, gaining a total of eight overall positions, and seven Pro/Am entries.

GT4 America Race One
The highlight race of the weekend for the Lizards took place on Saturday morning, as the GT4 America field braved the cold temperatures in the mid-40s. Elias Sabo started the 60-minute race from third in class and eighth overall, next to one of their main contenders in the championship, the No. 120 Porsche 718 Cayman GT4 RS Clubsport of Adam Adelson. He immediately got to work, passing the No. 35 Mercedes of Custodio Toledo to take seventh overall. He held fourth in class to the first full course caution, coming seven minutes into the race. The full course caution ended just as the mandatory pit window opened near the halfway point in the race. Sabo came in and pitted behind the No. 120 of Adelson, and following the car’s driver change to Andy Lee, the Flying Lizard Aston Martin beat the No. 120 out of pit lane, taking third in class for the second leg of the race. Lee kept riding the wave of that momentum, going side by side with Ian James on the front straight. James got into turn one too deep, and Lee swooped down into the inside, making the pass for second place in class. Shortly after making the pass, another full course caution came out and the stage was set for a 10-minute shoot-out. On the restart, Lee made a brilliant braking maneuver to the outside of turn one. He was able to hold position on the outside which gave him the advantage into turn two, taking the lead. From there, it was smooth sailing for Lee and the Aston Martin for the remainder of the race. He drove to the checkered flag, taking the first win of the year not only in GT4 America but overall with Sabo and the team.

GT4 America Race Two
Lee started race two from third place, surrounded by his closest competitors in the final charge for the championship title. As the field dove into turn one, the No. 8 Aston Martin had contact with a curb, causing a ripple effect among the other championship competitors. The contact moved Lee and Sabo out of competition for the class title, but the Aston Martin pressed on to finish out the final race of the season, finishing third in the Pro/Am class standings.

Closing in on finalizing plans for the approaching race season, Flying Lizard Motorsports will make 2023 season announcements in the coming months.

Elias Sabo
To get a win here at the Brickyard is amazing. Our season has been improving all year long. To get our first win here and have it be an overall win it just amazing. As always, the team gave us the best car in the paddock. It’s such a privilege to drive with Flying Lizard Motorsports.

Andy Lee
I dreamt about this moment for a lot of years. Just to do it together with Elias and the Flying Lizard team was so special. Owen Hayes and everybody out there just gave me the best car out there, bar none. I am so thankful.