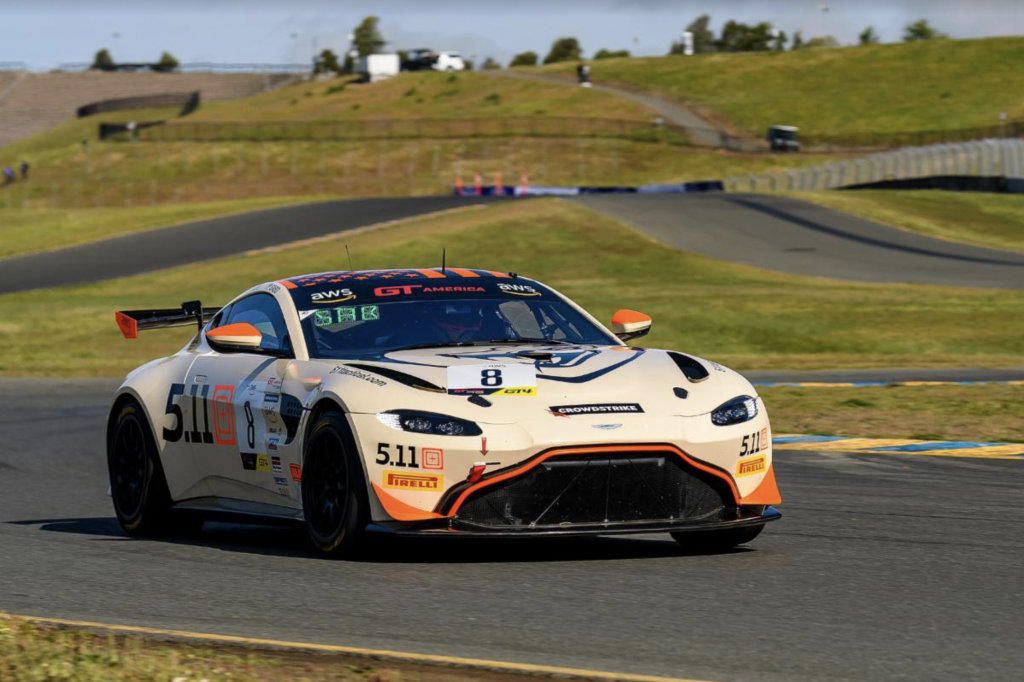 SONOMA, Calif., (May 17, 2022) – This weekend, Flying Lizard Motorsports will have a total of four races in two days at NOLA Motorsport Park as the team prepares to race rounds three and four of both the Pirelli GT4 America and Lamborghini Super Trofeo North America series. The ten-time sports car racing champions will journey to New Orleans, LA with an Aston Martin Vantage GT4 car, to be driven by Elias Sabo and Andy Lee, and a pair of Lamborghini Super Trofeo Evo2 cars, to be run by Slade Stewart and Tom Tait.

Located in Avondale, Louisiana, NOLA Motorsports Park sits just over eight miles southwest from the heart of New Orleans. The park’s designers also produced Utah Motorsports Campus and Barber Motorsports Park, two courses that used to be regulars on the Pirelli World Challenge, the predecessor to the Fanatec GT World Challenge America powered by AWS. This weekend, the series will run the full track layout, with a total length of 2.75 miles and 16 turns. This will be the first time any SRO America or Lamborghini Super Trofeo series have raced at the circuit, though many teams have already conducted private testing in preparation for the event.

Tickets for the event start at only $10.00, and weekend passes can be purchased for $50.00, making it an affordable and action-packed event for sports car racing fans. The weekend’s activities will offer two races for each of the four series competing, providing race fans with a total of eight races in the span of two days.

Pirelli GT4 America Powered by AWS
After starting the 2022 season in April at the team’s home track of Sonoma Raceway the Lizard’s GT4 America effort will resume this year’s championship at NOLA Motorsport Park. Drivers Elias Sabo and Andy Lee had a strong start to the season at Sonoma in the No. 8 5.11 Aston Martin Vantage GT4, earning a third-place finish in race one.

“Looking back on Sonoma, on the positive side to come away from our first race with Elias and Andy in a podium position was great,” said Program Manager Darren Law. “We didn’t have the finish we wanted in the second race, but the car was fast, and we feel confident in our program heading to NOLA. Having raced with Aston Martin previously will be beneficial because having a car you already know and understand takes one factor out of the equation when going to a new track.”

The driver pairing will contest a total of 16 races this season, split up into eight double-header weekends. This weekend will host a pair of 60-minute races in which Elias Sabo and Andy Lee will share the duties on the Aston Martin, each starting one race and finishing the other. Race one will take place on Saturday, May 21st at 3:10 PM, followed by race two on Sunday, May 22 at 11:00 AM. Both races will live on YouTube.com/GTWorld.

Elias Sabo
No. 8 Aston Martin Vantage GT4
We are looking forward to carrying over our momentum from Sonoma. NOLA is a new track for Andy and me, but we are confident we will have a great car to compete.

Andy Lee
No. 8 Aston Martin Vantage GT4
This will be my first visit to NOLA. I’m excited to learn a new track and get the 5.11 Aston Martin back up front!

“Our debut weekend at Laguna Seca went really well,” said Law. “All of our cars showed good speed, we were on the step of the podium, and we gathered a lot of information that will help the engineering group and the team going forward. We are carrying good momentum into rounds three and four and can’t wait to get back to racing.”

The team will build on their success from WeatherTech Raceway Laguna Seca this weekend at NOLA Motorsports Park for rounds three and four of the single-make championship. The double-header event will showcase 34 cars in two fifty-minute races on Saturday, May 21 at 4:30 PM U.S. Central, and Sunday, May 22 at 9:45 AM CT.

Slade Stewart (LB Cup)
No. 14 Lamborghini Super Trofeo
We are looking forward to the upcoming race at NOLA. We have good momentum coming out of our first race at Laguna Seca and believe the competition will be even stronger now that all of the other teams have gotten their cars sorted out. So, we enjoyed our success, but believe we have a lot of work to do in the coming races to stay on a competitive edge.

Tom Tait (Am)
No. 64 Emerald Center Lamborghini Super Trofeo
We learned at Laguna Seca that the 2022 Lamborghini Super Trofeo series includes many very fast and experienced drivers and teams. We were able to successfully complete both races and bank some points toward the season championship. We also learned a lot about the car race setup, tire degradation, and race pace. The NOLA race weekend with SRO will obviously present some challenges as far as ambient temperatures and the effects on drivers, brakes, and tires, however, I believe that we have done the proper training to be in a position to do well in that environment. Flying Lizard Motorsports has provided us with a fantastic team for the 2022 Lamborghini Super Trofeo Championship, already winning the LB Cup class race at Laguna Seca with new driver, Slade Stewart. Our knowledge base has grown from that first race weekend, and we are working hard to put Flying Lizard and Lamborghini of Newport Beach on the podium again at NOLA.