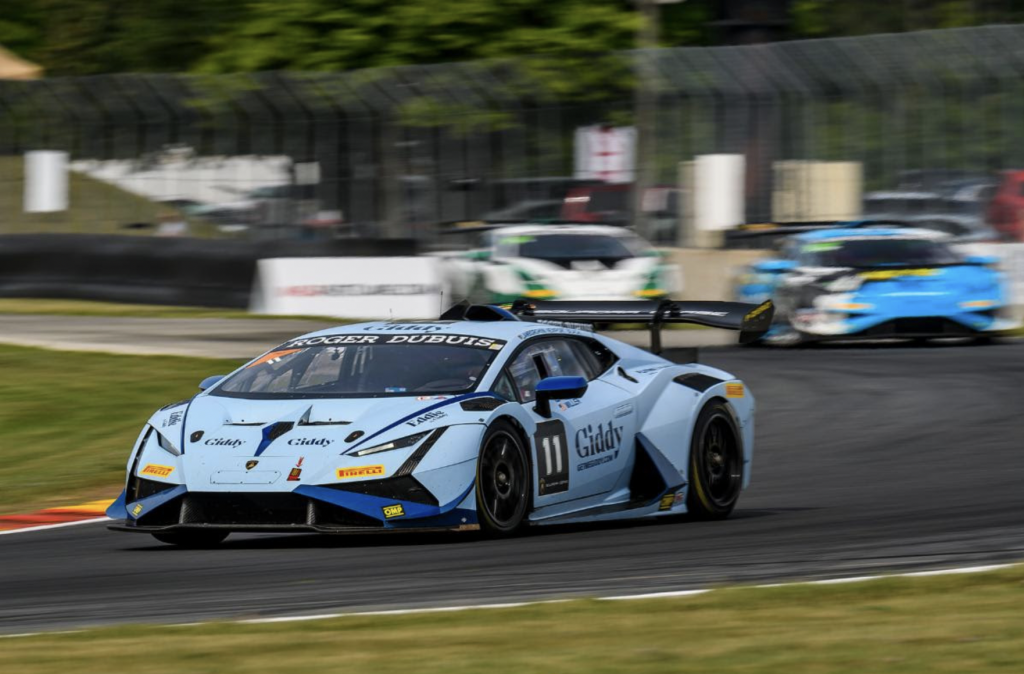 ELKHART LAKE, Wis., (August 8, 2022) – Flying Lizard Motorsports returned to the podium at Road America this weekend, as Joel Miller and the No. 11 Giddy Lamborghini earned second place in a challenging race to take the car’s first top-three overall result of the season. With the weekend highs came the weekend lows, and the other two Lizard entries suffered contact, unable to partake in the weekend’s full schedule.

Though Tom Tait showed great car control and speed leading up to the weekend’s pair of races, racing was not in the cards for the No. 64 Lamborghini. An incident in qualifying caused detrimental damage to the green machine, resulting in Tait retiring from the weekend, though he remained onside to support his teammates, Joel Miller and Slade Stewart.

In race one, Joel Miller and the No. 11 Giddy Lamborghini made their Pro-class debut, as Miller’s Am-ranked co-driver Brett Jacobson was unable to attend the event. He started from fourth in the Pro class and eighth overall, while teammate Slade Stewart started the race from LB Cup pole position. Stewart had a large gap over his competition while Miller was entrenched in a battle for position while the race endured several full-course cautions. With about 15 minutes remaining in race one, Stewart’s pink unicorn No. 14 Lamborghini suffered a puncture, forcing him to limp back to pit lane for a fresh right rear tire, losing the top position in class. Meanwhile. Miller had produced a strong run but was penalized one position for not yielding to an oncoming car at pit lane exit. The challenging race for the Lizards netted a final position of sixth in class for Miller and fifth in class for Stewart.

Race two was even less kind to Stewart and the Unicorn Lamborghini. As the field conducted a pre-race pace lap, contact from another car that did not slow as the cars bunched up caused damage to the rear suspension. The damage ended up being too much to repair in the limited time, and Stewart retired before the field took the green flag.

Miller, the last Lizard standing, started the race from eighth position in the Pro class, and immediately got to work, gaining a position as the skies darkened over Road America. As it did earlier in the IMSA WeatherTech SportsCar Championship race, rain descended over the four-mile course, bringing out a full course caution.

From there, the race’s outcome was determined by the strategy teams choose on tire selection. After a brief red flag due to weather conditions, the field restarted for a 17-minute sprint to the checker flag. Miller had climbed his way up to third place, though the Pro class leader had yet to make his mandatory pit stop. Miller, knowing the leader would receive a penalty, stayed focused on the No. 88 Lamborghini ahead, and engaged in a heated battle for second place. The two raced side by side throughout the final turns, but in the end, Miller finished second. Elated with the No. 11’s first podium of the season, Miller celebrated in pit lane with the Lizard crew, satisfied with the success of the weekend.

“That was one of the most fun in a while,” said Miller. “The race was all about tire management as soon as we came on to the rain tire. There was no water out there on track. So once we got in a good position, it was all about managing it. The other car wanted to push hard the whole time, so we let him do it. We saved our tires and made sure we had a good run at the end. Second place overall was great for the whole program. I’m bummed Brett couldn’t be here. Thanks to Giddy, Flying Lizard, and the whole crew. We’re learning more about this car. This is our first year doing this, so we’re still putting the pieces together and look forward to more later.”

Though it was a challenging week for the Flying Lizard effort, Program Manager Darren Law left the weekend feeling happy with the end result.

“We had an up and down weekend and some struggles with a couple of the cars due to on-track incidents,” said Law. “But I’m really happy for Joel, Brett Jacobson, and the Giddy car. It was a challenging race. It was unfortunate that Slade got taken out early on in race two as he had a great qualifying lap to get pole position but Joel had an amazing run and an exciting finish. He almost closed it out on the last lap. I’m really happy to see our car in P2 overall, the entire team has been working hard this year and I’m looking forward to the next race.”

The next race of the season, and the final round in the United States, will be held at VIRginia International Raceway in support of the Michelin GT Challenge at VIR with the IMSA WeatherTech SportsCar Championship. The weekend will consist of only GT-racing, August 26-28. For more information, visit imsa.com.