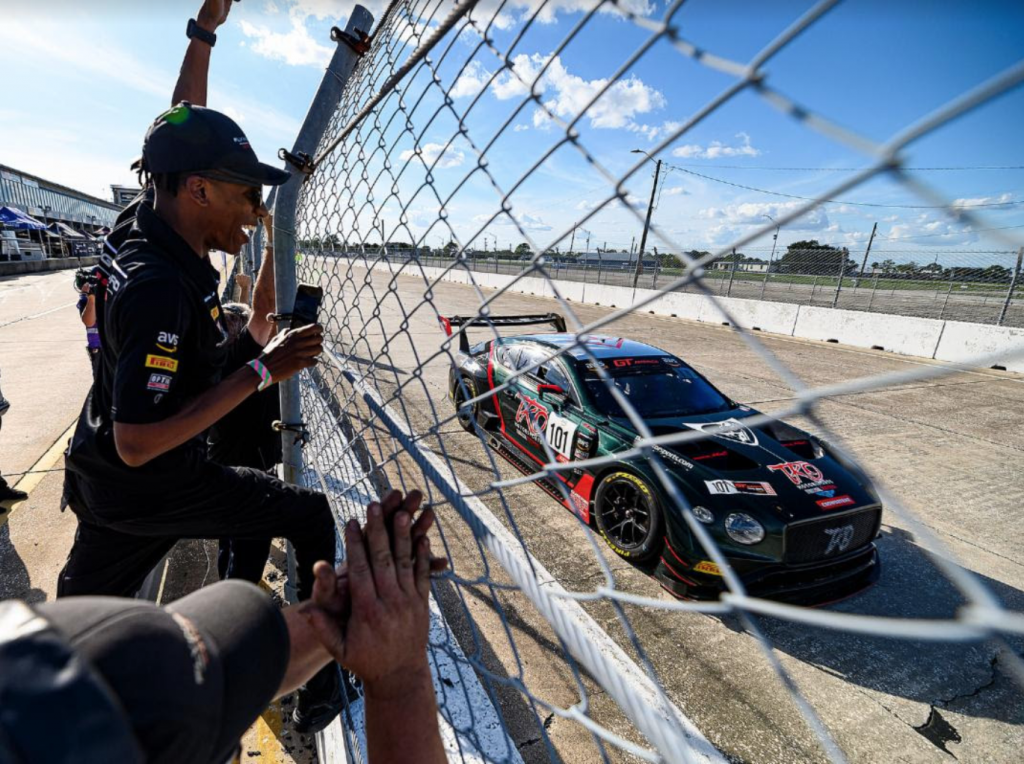 SEBRING, Fla., (October 4, 2021) – Flying Lizard Motorsports brought the heat to Sebring, Florida sweeping the podium top step in two classes in GT America powered by aws. The No. 460 Porsche 911 GT3 R driven by Andy Wilzoch and the crew powered through a tough weekend start to claim victory in Masters class both Saturday and Sunday. The TKO Motorsports No. 101 Bentley Continental GT3 driven by Memo Gidley took the weekend by storm with back-to-back overall wins.

SRO3
Strong test and practice days sent Gidley flying into Saturday qualifying, earning him a pole position for the start of race one. The TKO Motorsports Bentley created a comfortable gap early into the race allowing for a solid race lead which continued while lapping the back of the field. Crossing the finish line first overall and in-class, Gidley earned his first podium top step in his return to racing, the Crowdstrike Fastest Lap, and another pole start for the weekend’s second race start on Sunday.

Starting on the pole, Gidley quickly drove into a commanding lead in race two. With a full course yellow at the halfway point, the competition was stacked for a restart, and Jason Harward in the No. 88 Lamborghini took full advantage of the situation to challenge Gidley. With the tires pushed to their limit, he spent the remaining 12 minutes of the race defending against the Lamborghini, clenching another first in class and overall win.

SRO3 – Masters
After running the fastest lap in class during the second practice on Friday, the Porsche had a mechanical issue preventing it from completing the last few minutes in the session and also prohibiting Wilzoch from making the qualifying session. Starting from the back of the grid, he fought his way through the 17-car field. With 15 minutes remaining in the race and Wilzoch then in seventh overall position, his pace was 1-2 seconds faster per lap than sixth place Elias Sabo in the No. 8 Audi R8. With his sight set on Sabo, Wilzoch closed the gap positioning him to overtake the Audi and continue through the field. As the white flag marking one lap remaining waved, Gray Newell in the No. 25 Aston Martin had an incident causing the vehicle to lose its hood on track. Narrowly avoiding the large flying debris, Wilzoch took the checkered flag first in class and fourth overall.

Driving the fourth fastest lap of Saturday’s race, Wilzoch was better positioned both overall and in class for the second race start on Sunday. At what should have been a green start to the race, a false start by another car caused the field to complete a third pre-start lap. In the second racing lap, Wilzoch lost one overall position but maintained a top-five standing. At the halfway point, a full course yellow brought the GT America group back together until the restart leaving a little over ten minutes of racing remaining. With the loss of about four minutes at the front of the race due to the delayed start, Wilzoch did not have the time needed to insert himself into the battle between fourth-place Jason Daskalos in the No. 27 Audi and third-place Rodrigo Sales in the No. 77 Acura. Finishing fifth overall, he secured another podium with first in Masters class.

DRIVER QUOTES
Andy Wilzoch | No. 460 Porsche 911 GT3 R
It was a strong weekend for the No. 460 Porsche. There were some very dicey battles out there in both of the races, but I’m glad we were able to stay out of them and just work through traffic and slower cars to take the win in both series. We had very limited track time heading into the races on Saturday and Sunday, so I’m thankful to everyone on the team for getting the Porsche ready for me to challenge for those positions.

Memo Gidley | No. 101 Bentley Continental GT3
What a great Sebring SRO GT America weekend that we got two victories in the #101 TKO Motorsports Bentley Continental GT3! It has been a long journey for me to get back on top of the podium after what I went through at my Daytona accident in 2014 and it felt fantastic! Sebring is also a vicious track with the big bumps and unique surface make it hard to drive! But the TKO Bentley just growled and pushed back and handled it in style! The Flying Lizard crew gave me a great car to do what we did!