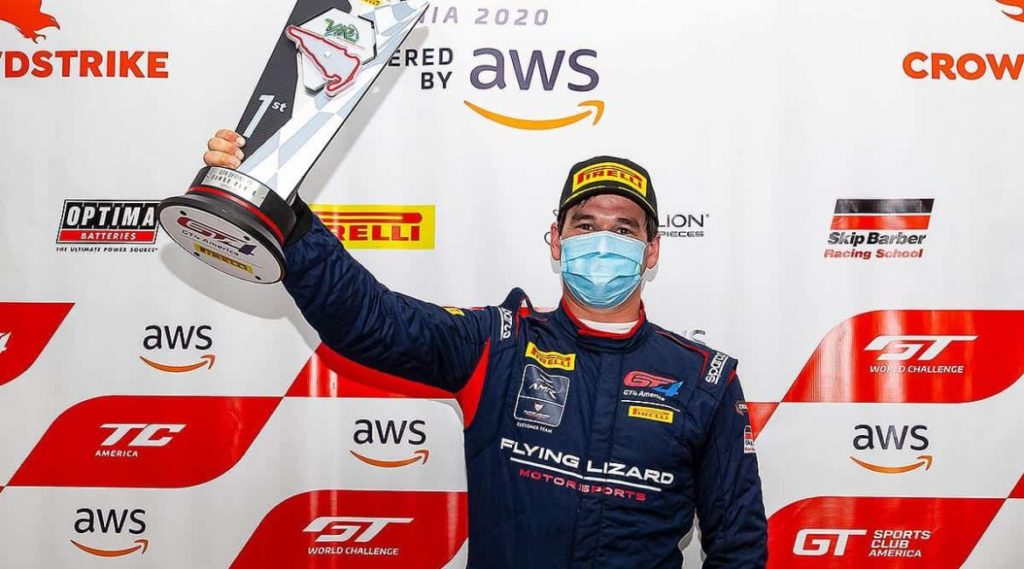 ALTON, Vir., (July 13, 2020) – Flying Lizard Motorsports returned to racing this weekend at VIRginia International Raceway in spectacular fashion, sweeping all three Sprint wins in the event’s triple header with Michael Dinan in the #210 Aston Martin Vantage GT4. Despite technical setbacks, the team’s SprintX programs with Dinan and Robby Foley, and Erin Vogel and Michael Cooper persevered to also put in strong on track performances. With four wins to date this season, Dinan now leads the GT4 America Sprint AM Championship.

“Overall we had a really good weekend,” said Program Manager Darren Law. “It was great to be back racing again and the series did a nice job following safety protocol for COVID.”

The Aston Martin duo of Michael Dinan and Robby Foley had to roll with the punches early into the weekend, when an issue with the drivetrain on the No. 21 Aston Martin Vantage GT4 forced the car to retire from the weekend. The team moved quickly, getting the No. 210 car approved for both the Sprint and SprintX sessions, six races total. Dinan performed perfectly in his Sprint qualifying session, earning pole position and fifth overall. He led the AM class from start to finish, earning his second Sprint race win of the season. He started race two from third in class, and seventh overall, making his best passes over the competition in turn three. He again took the win, finishing fifth overall after another flawless run. He currently leads the Sprint AM championship by 42 points.

Clean race strategy and an accurate calculation on fuel usage gave Dinan and Foley a top five finish in class an overall in SprintX race one, extending their two race streak of top five finishes. Foley started SprintX race two mid-pack, and together he and Dinan were able to advance up to earn their fourth fop-five of the 2020 season. Sunday morning, Dinan started the final SprintX race in 14th and broke into the top ten in the first ten minutes. The No. 210 was served a drive through penalty for pit lane speed violation during the mandatory driver change pit stop. Foley finished the race, ultimately finishing seventh.

“What a difference a year makes for Michael Dinan,” said Law. “He has really progressed and matured as a driver and it showed this weekend. He was patient, had good speed and executed his passes well. I have to also commend Robby Foley who has been working with and coaching Michael all week long. They work well together and I am looking forward to the continued success.”

Despite trouble that hampered the starting position for all three races, Erin Vogel and Michael Cooper put in a commanding performance in the No. 30 McLaren 570S. Friday morning before qualifying, the No. 30 suffered damage resulting from issues with the exhaust system. The lengthy repairs caused Vogel and Cooper to both miss their qualifying sessions and seven laps of the first race, starting all three races from the rear of the field. In race two, Cooper charged through the field from his 20th place starting position to seventh overall, making the mandatory pit stop and driver change. Erin Vogel stepped in for the second stint, but the latch on the door failed, forcing her to make an extra pit stop, moving the car back down the charts, losing all progress previously made. Vogel was able to set competitive lap times throughout her stint, but again, the car finished near the rear of the field. The No. 30’s streak of bad luck finally ceased in race three, where Vogel again started from 20th position, methodically picking off her competitors, one by one. She advanced six positions in her stint, and Cooper took over to claim another five, resulting in a seventh place overall finish, less than two seconds away from a class podium.

“We were also really impressed with Erin Vogel this weekend,” said Law. “We had some tough luck with mechanical issues at the start of the weekend, but she didn’t let it get her down. She and Michael Cooper had a great run in the final race of the weekend. We are looking forward to having the next round at our home track in Sonoma and keeping the momentum going.”

Despite the setbacks, both Flying Lizard Motorsport cars ended the weekend on a high note, eager to carry the momentum to the next rounds at Sonoma Raceway, August 7-9. Located in California’s wine country, Sonoma raceway is the home base for Flying Lizard, and the site where the team does much of its testing all year. The team is expected to perform strong, with all drivers previously having ample testing time at the circuit.

That was awesome. It was a great race weekend. This is definitely the longest race weekend I’ve been a part of so far. It was very tiring on all the guys here. Everyone did an amazing job, and the cars were great. We ran one car in six races which was definitely not easy for the crew. Robby did a great job in SprintX with me. Unfortunately we got the pit speed penalty today, but I’m really happy with my performance. All three Sprint races ended up coming to us one way or another. I couldn’t have asked for a better result.

Overall, we had a pretty good weekend. Michael has done an amazing job. So far we have two out of three races, with one more to go. His improvement in the last year has been awesome to see. His speed has always been there, but in how he puts races together, you can see he’s maturing as a driver. It’s great to be back with the team after a long break. I’ve always enjoyed driving with Michael and coaching at the same time. As always, we finished the weekend with positives we look to take into Sonoma.

We wrapped up the Sunday race with our best finish so far this season. Honestly it was just a relief to have a race where everything went to plan, which was all I wanted this morning from the moment I woke up. To finish just one position off the podium was both wonderful and bittersweet. The car didn’t have the pace to catch third place this weekend, and we know that there’s still time to be found in the set-up. However, we got a lot closer to it even with all the disruptions this weekend, and have a game plan for Sonoma that will hopefully take us that one step closer.

Today was a good way to cap off the weekend to come home seventh overall, and fourth in class. All of Flying Lizard guys had a pretty tough workload this weekend. But they got the car back together and running strong, so thank you to them. Erin did a really good job getting us in that position today, so I was just trying to hold it, which wasn’t the easiest thing. I managed to bring it home. I’m looking forward to the next race at Sonoma. Hopefully we can be a little more competitive.