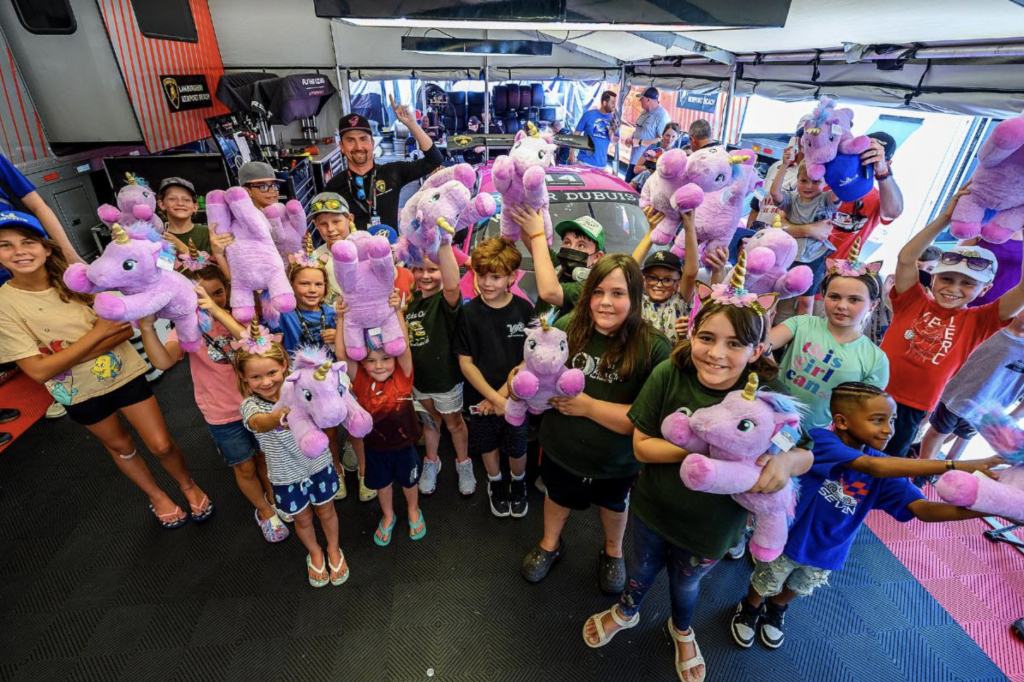 “This was a great way to close out the US portion of our series and also a great lead in to the Final events in Portimão Portugal in a few months,” said Program Manager Darren Law. “It has been a great season so far and both Tom and Slade have had a phenomenal year. We are going to Portugal with tight points battle, so it will be exciting. There is still a lot of work to do as we have to prepare the cars and pack all of the equipment in a short time period, and everything has to be ready to go in just a few weeks. Although we have done many races in Europe, this will be our first time racing at Portimão Portugal. We are all looking forward to it.”

Race One
Stewart and his No. 14 pink unicorn Lamborghini started from third place in the LB Cup class and teammate Tait and his No. 64 Lamborghini took the green flag from sixth in the Am class. The Lizard pair expertly avoided a multi-car collision and spin in turn one on the start, going onto the grass to stay away from potential carnage. While fighting for a podium position, Stewart received a penalty for an error leading up to the start, forcing the fan-favorite car to serve a drive-though penalty from fourth place. He rejoined in fifth, only losing one spot in the LB Cup class. While fighting to gain back lost ground, the pink Lamborghini had a spin on course, masterfully avoiding any competitors or any track walls. He rejoined in fifth and held position to the checker flag. Tom Tait had his strongest run of the season after his sixth-place start, closing out the first half of the race in fourth, as the field began their mandatory pit stops. He pitted for his own perfectly timed stop, and rejoined to complete the race, earning his first top-five finish of the weekend. Though a few tough races had hampered the Am-class racer this season, Tait had a strong performance in race one, allowing him to run to his potential, continuing his progression of the season.

Race Two
In race two, Tait’s misfortune returned. He started race two from fifth place and held position, but shortly into the race pulled into pit lane with an electrical issue. The team was able to diagnose the issue and the No. 64 Lamborghini rejoined the race. Stewart, the LB Cup points leader, started the race from second, with the No. 3 Am car of Randy Sellari separating him from the class-leading No. 49 of Anthony McIntosh. A full course yellow came out, eliminating all gaps in the field. Though it brought Stewart closer to the class leader, it also brought the next class positioned competitors right to the rear of his Lamborghini. The field went back to green with 23 minutes remaining, and Stewart engaged in a battle with McIntosh for the points lead, staying in second place, fending off heavy pressure from Charlie Martin in the No. 54 LB Cup entry. Side-be-side racing with Martin resulted in contact from the No. 54, sending the pink unicorn spinning. Slade recovered and rejoined in third place, thankful not to have any serious damage. He continued the short run to the checkered flag, whereupon after it waved, Martin was assessed a time-penalty for causing an incident, moving her to fourth place, and bringing Stewart back up to the well-deserved second place. Tait maintained his stint for the entirety of the race after his early electrical issues, to earn a sixth-place finish.

With the North American tour of the 2022 season complete, Flying Lizard Motorsports will head to Portimao, Portugal for the Lamborghini Super Trofeo Grand Finals, November 3-6. The special event will be a collection of Lamborghini Super Trofeo competitors from all over the world to compete in a season-finale weekend. The weekend will start with round 6, the final round of the US Championship and will follow a similar format, with two practice sessions, two qualifying sessions, and two races to decide the Champion of the US series. The second part of the weekend will also have two races but will put the US drivers up against the European drivers to determine the world champions of the various series. Slade Stewart currently leads the LB Cup standings with a nine-point lead over Jon Hirshberg and Ofir Levy, with Charlie Martin and Jason Gagne-Keats just two points further back.

Slade Stewart
We started the weekend with really good pace in practice. Qualifying went great. We placed third and second respectively for Saturday and Sunday’s races. Yesterday’s race did not go as planned, but we had a lot of fun, and we had a lot of fans out to enjoy the experience with us. They were by the tent to check out the cars and talk to the team, which is always much appreciated. Regardless of the race results, it was an awesome day. Today was a hard-fought race. We started P2, fell back to P3, got back to P2 and that’s where we finished, so we like the points that we’re coming out of VIR with. That puts us in a good position going into the World Finals. If it wasn’t for Flying Lizard, I don’t know that I’d be here. It’s the great team that I have around me – everybody from Jack Schillawski all the way to Darren Law, Thomas Blam, Tommy Sadler, Kelly Brouillet, Steve Newey, and Steve Conover – the list goes on! It’s everybody that makes this possible. I’m also blessed that two of my four children are here with me today to see my final US race and see me get a podium. For this dad, that’s pretty darned special.

Tom Tait
I’m continuing to improve every race. I’m very happy to finish in the top five and I’m looking forward to the World Finals in Portugal. We definitely should have had that top-five sooner, and many more of them, but racing never goes the way you plan, even when you run with perfect execution. This time, things finally went our way and I’m very happy with the result. I’m thankful to everyone on the team for all of the effort we put in.