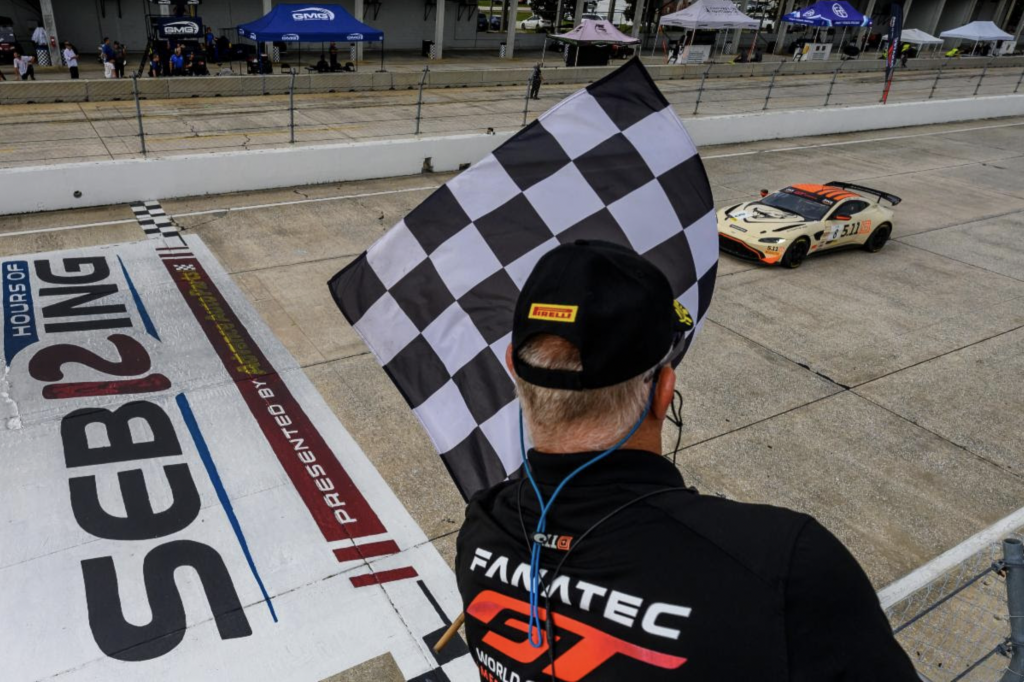 SEBRING, Fla., (September 26, 2022) – At a very hot and humid Sebring International Raceway, professional sports car racing team Flying Lizard Motorsports celebrated a big win and an additional two podium finishes in the GT America powered by AWS, and the Pirelli GT4 America powered by AWS. Elias Sabo, driver of the No. 8 Aston Martin Vantage GT4 secured his first career win in the GT America series on Sunday, and together with co-driver Andy Lee, celebrated two more podium finishes in the GT4 America championship, keeping the team in contention for the final battle for the title.

“This was a great weekend for the entire team,” said Program Manager Darren Law. “We have been on a consistent run of podium finishes every weekend since mid-season, and to have Elias get his first pole and first win of his career is amazing. Everything is working well with our program and to have an opportunity for not only a podium in the championship but a possibility for the top position couldn’t make me prouder. We will take this momentum to Indy and try to close out this year on the top step!”

GT America Race One
Though Sabo qualified in an impressive second place for race one’s start, the No. 8 Aston Martin Vantage started the round from 11th in class and 23rd overall, serving a penalty for passing a car under yellow at the previous event at Road America. In the first two laps at Sebring, he gained six overall positions, working his way through the slower competitors. He sailed by the No. 35 of Custodio Toledo, to break into the top ten, then made the pass for ninth place. Perfectly positioned in the final laps, Sabo avoided possible oil on track to gain four additional spots on the white-flag lap. He finished ninth overall and fifth in class, earning his fourth top-five of the season.

GT America Race Two
Celebrating his first career pole position, Sabo led the GT4 class to the green flag at Sebring International Raceway on Sunday morning. He had a strong start, gliding into turn one, holding off early pressure from Jason Bell in the No. 2 Aston Martin Vantage GT4. As if Bell were not even there, he kept his lead and pulled away from the field. For the next 40 minutes, he sailed through each turn, keeping a calm demeanor as he maintained his two-second gap over Bell. He masterfully kept his lead consistent, taking the checker flag in first, earning his first career win in GT America.

GT4 Race One
Sabo and Lee entered the Sebring weekend sitting fourth in the championship, with just enough points to remain into the battle for the title. In order to stay in the hunt. The Lizards would not only need to finish near the front, but for some adversity to befall their competition as well. Sabo started race one from second place in the Pro/Am class and eighth overall. He momentarily fell back a position in an effort to avoid any mele in a very crowded opening turn, keeping close on the rear of the No. 50 of Ross Chouest. Bad luck found it’s way to the points leader, temporarily stalling the car on track, allowing the No. 50 and the No. 8 Lizard car to each gain a position. Sabo closed out his stint in third place, pitting during the mandatory window for Lee to get in and conclude the race. Lee joined the fight in third and made quick work to pass the No. 50 of Aaron Povoledo. Though he could have easily been deterred by the 10-second gap to the leader, he made the most of his 23 minutes remaining. Gaining almost a second each lap on Justin Piscitell in the No. 55 car, Lee put in an exhilarating drive to close the 10-second gap and come within striking distance of the lead. If the race had continued just one more lap, Lee would have been in the position to make the pass, but in the end, he finished in second, a mere 0.172 seconds behind. The Lizards still celebrated a job well done, and the valuable points grab heading into race two.

GT4 America Race Two
Feeling an extra boost after an intense performance the day before, Andy Lee started GT4 America race two from second place in the Pro/Am class and third overall. He kept the car clean in the turn one free-for-all, sliding into fourth place overall and third in class. Jason Hart led Aaron Telitz and Andy Lee, with Kenton Koch joining the party in the opening laps. Koch made the pass on Lee, but in lap five, Lee passed Telitz, climbing back into the top three in the Pro/Am class. Lee stayed close to the Aston Martin of Koch, entering pit lane for the mandatory stop right on his tail. Driver changes commenced, and Bryan Putt took over from Koch, and Sabo took over from Lee. Sabo immediately engaged in the chase, gaining a second of track time per lap. With 11 minutes to go, he had a 4.9-second gap, but within a matter of laps, he closed in on his competition, executing each corner with precision. In the final lap, the No. 15 Aston Martin Vantage of Putt suffered a momentary mechanical issue, and Sabo took advantage, sailing to second place, concluding his extraordinary rebound. The additional podium finish moved Sabo and Lee to third in the driver championship standings and Flying Lizard to third in the team standings.

With one event remaining, a maximum of 50 points remain up for contention, taking the battle to Indianapolis Motor Speedway for the final double header of the season. The Lizards will not only again need to produce podium-worthy performances in each race, but also sustain a suitable gap over the competition. With ten titles already written in the team’s history, the Lizards are sure to be the team to watch October 7-9.

Elias Sabo
It feels great to get a first win in SRO America. The car was outstanding once again. All credit to Andy Lee for his outstanding coaching, Owen Hayes for his setup on the car, and the Flying Lizard team for continuing to deliver the best car in the paddock. This was a great weekend with two second-place finishes in GT4 America. I feel so fortunate to drive with Andy. He performed exceptionally well again this weekend. As has become customary, the Flying Lizard team continues to provide us with the best car in the paddock. We are looking forward to finishing the season strong at Indianapolis.

Andy Lee
This is a dream weekend for us. Elias secured his first win in GT America and we got our third second-place finish. It seems we do everything in threes. We’re knocking on the door of a win, and this is just a great team effort.