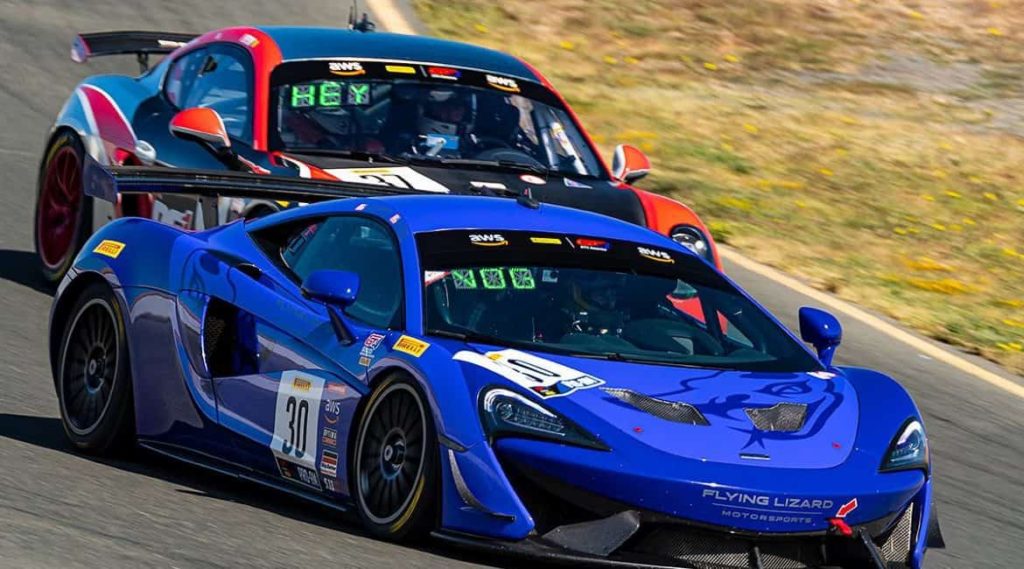 SONOMA, Calif., (August 10, 2020) – Flying Lizard Motorsports celebrated an incredibly successful weekend at Sonoma Raceway, the team’s home track of the last 17 years. The GT4 America race weekend produced three wins and two additional podium finishes between the Sprint and SprintX triple headers. The No. 210 Aston Martin Vantage GT4 of Michael Dinan and the No. 21 Aston Martin of Dinan and Robby Foley had an incredibly strong performance all weekend, earning the team their first wins at the road circuit. While the No. 30 McLaren 570S GT4 again had a weekend filled with adversity, the driving pair of Erin Vogel and Michael Cooper again put in strong performances despite the desired results.
“This was an important weekend for us at our home track, and the team did not disappoint,” said Program Manager Darren Law. “We couldn’t have asked for a better weekend from the Aston Martin of Michael Dinan and Robby Foley. The car was fast, they both drove well, and to come away with three wins and two more additional podiums in six races was phenomenal. The team executed well all weekend and we came away with the hardware and points to prove it. We also had a great performance from the McLaren of Erin Vogel and Michael Cooper but the racing luck just wasn’t on their side, it was a weekend where the results don’t reflect the effort they put in. They had the pace and I am confident we will see them upfront as well soon this season.”

Sprint Race One
Michael Dinan got the weekend off to a strong start at Sonoma Raceway, earning the Am class pole position at the home track for Flying Lizard. Starting fourth overall behind Jarrett Andretti, the competing McLaren tried to create a gap over the No. 210 Aston Martin. Dinan quickly closed the three second gap to under two seconds in just a handful of laps. The pair raced nose to tail for the entirty of the race, with Dinan careful to avoid contact that had come previously from a similar dual with Andretti. Holding the class lead and not in the fight for an overall podium position, Dinan wisely chose to stay in fifth place and not contend for fourth overall.

Sprint Race Two
Dinan started the second sprint race of the weekend from sixth place overall and second in class on Saturday morning under perfectly sunny skies. Just ahead sat the fifth place car and class leader, Paul Terry. While Dinan stayed close for the majority of the 50 minute race as the field spread out, the No. 210 was unable to get close enough to make the pass, but successfully held off the competition to earn a second place finish, Dinan’s third podium of the weekend.

Sprint Race Three
The final sprint race of the season look place under clear, blue skies and windy conditions. Dinan took the green flag from eighth position, and passed the No. 62 of Klenin on the start. By lap two, he was putting heavy pressure on the No. 59 of Terry, one of the cars he had been battling with all weekend. Lap by lap the two fought for position, resulting in the 59 spinning in turn two. The spin brought Dinan 3.3 seconds behind the class leader, fighting for a top five overall position. The fight was short lived, as the No. 210 was forced to serve a drive through penalty for the contact with the 59. He rejoined at the rear of the field, finishing ninth overall and fifth in class.

SprintX Race One
Michael Dinan and the No. 21 Aston Martin started the first SprintX race from second in class, and fourth overall, with the class leader two positions ahead. Dinan maintained his pace and position to bring the Aston Martin in as soon as the pit window opened with 35 minutes remaining. Robby Foley took over command of the car, gaining a position in pit lane. He rejoined in third overall, second in class with a 0.4 second lead over Jarett Andretti. Mechanical trouble for the race leaders with 15 minutes remaining brought the Flying Lizard Aston Martin up an overall position, with Robby Foley slowly gaining each lap on Jason Hart, the race leader. In the end, the almost six second gap was too large to close in the remaining time, resulting in the No. 21 of Dinan and Foley to finish in second place.

The No. 30 McLaren 570S GT4 had a streak of bad luck in the opening SprintX race after starting in 20th position overall, ninth in the Pro/Am class. Gaining three spots in the opening lap Erin Vogel, was climbing her way up the chart when she first reported contact from another car. She spun, recovered and rejoined in the rear, settling down to regain lost time. The series of unfortunate events continued, as a Porsche lost control in turn one, and had contact with the Flying Lizard McLaren. Vogel was able to continue without stopping, but the impact further affected the handling of the race car. Vogel closed out her stint, pitting during the mandatory window for Michael Cooper to take over. He joined the fight 17th overall and ninth in class. Cooper’s expertise at Sonoma Raceway was on full display, as he worked his way up to 12th, passing two cars in turn eleven. A last-lap mechanical issue lost the pair of Vogel and Cooper two positions, finishing ninth in class, 14th overall.

SprintX Race Two
Robby Foley started SprintX race two from the front row, next to the overall pole sitting No. 71 KTM X-BOW. The KTM’s performance was unmatched at Sonoma raceway, creating a large gap over the rest of the field. Foley kept second place locked in throughout his stint, with little pressure from behind, still leading the Pro/Am class. He completed his stint and pitted in the same lap as the KTM, and quick work by the Flying Lizard Motorsports crew in the mandatory pit stop and driver change to Michael Dinan brought the No. 21 Aston Martin out of pit lane directly behind the KTM, completely closing their 4.5 second gap to the leaders. Dinan kept his run smooth and consistent, earning his first overall SprintX win with co-driver Robby Foley.

The No. 30 McLaren’s bad luck from the previous day had subsided by the green flag of race two, which saw Michael Cooper start 11th overall and eighth in the pro/am class. While the McLaren didn’t have ideal levels of grip in the afternoon temperatures, Cooper held position for most of his stint, fighting off pressure from a Porsche for position. He pitted in 12th, and Erin Vogel took over for the second half of the race, exiting pit lane into a pack of cars. She expertly raced in the group, holding 13th position. She regained 12th spot by the conclusion of the race, finishing sixth overall.

SprintX Race Three
SprintX race three brought Dinan and Foley their first overall SprintX win, after a dominating run from pole position. Foley kept the lead in the opening lap and never looked back, holding a several car lead over Kenton Koch. The lead grew with every lap, and Foley pitted for his mandatory stop with 1.1 seconds over his competitor. A flawless pit stop by the No. 21 crew got Dinan out of the pits with a seven second lead with 21 minutes remaining on the race clock. Dinan hit his marks every lap and coasted to the checker flag, earning his first overall win with Robby Foley.

Michael Cooper started the No. 30 from seventh overall, hoping for a promising run through the field. He gained a spot in the opening lap, and maintained his position until the mandatory pit stop. An error in the data logging led to the McLaren getting a drive through penalty for pit lane speed violations, resulting in a ninth place class finish for the duo.
The next rounds of the GT4 America championship will take place in Elkhart Lake, Wisconsin at Road America, the longest track on the 2020 calendar. The event will host triple headers for both the Sprint and the SprintX championships, making it another six race weekend for Flying Lizard Motorsports.