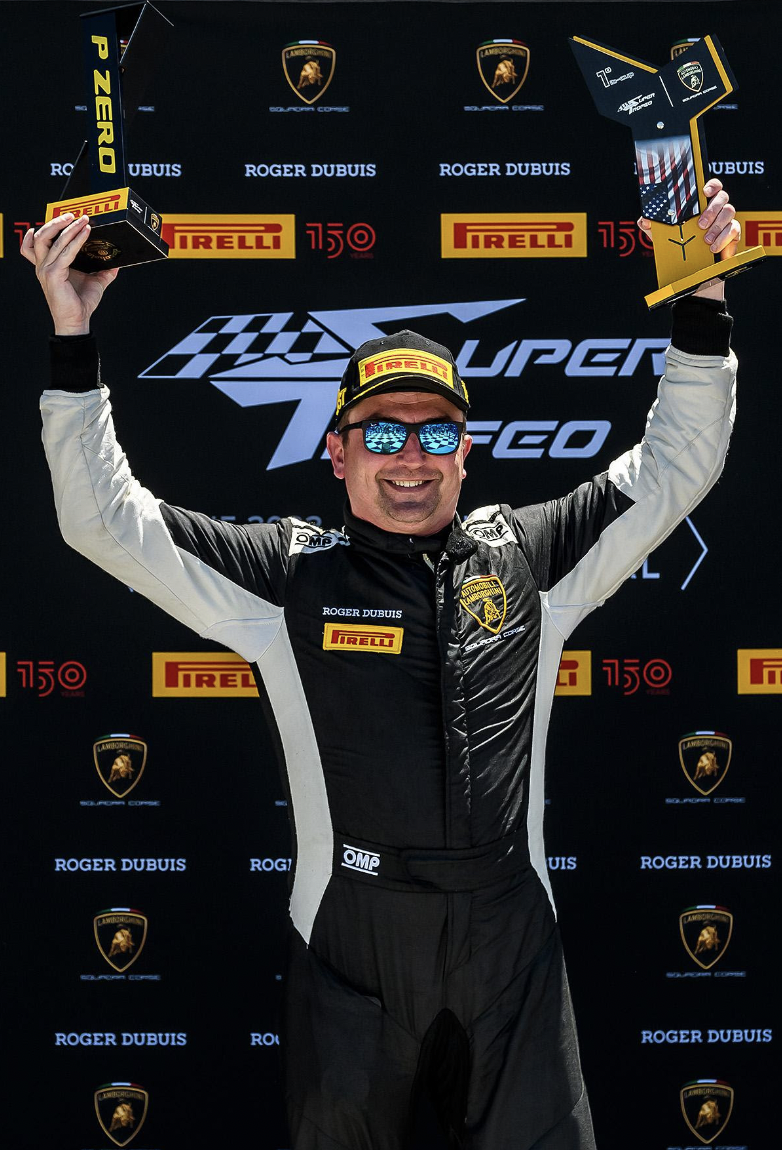 WATKINS GLEN, N.Y. (June 27, 2022) – Flying Lizard Motorsports returned to the IMSA paddock last weekend at Watkins Glen International, racing in rounds five and six of the Lamborghini Super Trofeo North America championship. Lizard driver Slade Stewart and his No. 14 pink unicorn Lamborghini Huracán Super Trofeo Evo2 closed out the weekend with a win in the LB Cup class, his third of the 2022 season.

It is always great racing at Watkins Glen and this weekend didn’t disappoint. Slade is having a great run this year and has shown a lot of speed for his first season. Both Tom and Joel/Brett are also going very well. I am proud of our program, things are working well in all areas of the program and I look forward to the second half of the season.

While the trio of Lizard Lamborghinis had a challenging race one on Friday, the three cars had a stronger race two on Saturday, closing out the weekend with four top-six finishes to accompany Stewart’s win.

Race One
Race one had little love for the Lizards. While the No. 11 Giddy Lamborghini of Brett Jacobson and Joel Miller had a strong fourth place starting position in the Pro/Am class and ran in the top three before an early full-course caution interrupted the race. The team suffered a drive-through penalty for an infraction during the mandatory pit stop, setting the entry back to finish in sixth. Slade Stewart’s bad luck started before the race went green when a piece of debris cut his tire, forcing him to limp into pit lane while the rest of the field roared into turn one. He was able to get a replacement tire and rejoin the race, however unable to gain back much of the lost ground, finishing in sixth place in the LB Cup. Tom Tait had a strong drive in the Am Class, starting twelfth and using his limited green time to charge up to eighth place in the No. 64 Lamborghini Huracán Super Trofeo Evo2.

Race Two
Stewart started race two from pole position in the LB Cup, with Jacobson starting from sixth in Pro/Am, and Tait in eighth in Am. The field went full course caution in lap one for a crash, prohibiting any gains for the Lizard trio. With 32 minutes remaining, the field went back to green and immediately spread out. Jacobson pitted from seventh, and Miller took over the No. 11 car to complete the race. Tait pitted next, completing his mandatory stop with 25 minutes remaining. Stewart followed three minutes later, still holding to the LB Cup lead. Another full course caution interrupted the race with five minutes to go, and Stewart closed out the event a third-time winner, with Miller and Tait each earning a sixth-place finish in their respective classes. With his third victory of the year, Stewart leads the LB Cup points championship battle.

To date in their debut Lamborghini Super Trofeo, the Lizards have earned three wins and seven top-five finishes, with double headers at Road America and VIRginia International Raceway remaining before the team heads to Portimao, Portugal for the Lamborghini Super Trofeo World Finals. The IMSA SportsCar Weekend at Road America will take place August 4-7. For more information, visit imsa.com.

Brett Jacobson (Pro/Am)
No. 11 Giddy Lamborghini Super Trofeo
Watkins Glen is one of my favorite tracks so was really looking forward to the weekend. Each time on track I learn a little more and I’m thankful to Joel and the team for helping me along. The racing in Super Trofeo is a much higher level which is good and pushes me to be better. Looking forward to Road America!

Joel Miller (Pro/Am)
No. 11 Giddy Lamborghini Super Trofeo
I have mixed feelings about the weekend but glad we were able to get Brett back into the car following his Montreal race weekend accident. We improved the car a little bit and simply used the weekend as a test weekend. We had to miss the second round at NOLA so it was great to be back on the grid. We have never tested and as we learn the car will improve. Thanks to the Flying Lizard team and looking forward to Road America soon!

Slade Stewart (LB Cup)
No. 14 Lamborghini Super Trofeo
What an amazing weekend. While Saturday didn’t go our way, I learned a lot and worked hard to catch back up with the pack. Sunday, we were positioned well sitting on pole for LB Cup, and once the green flag dropped it was time to go. We had strong competition from the No. 13 and others, but we stayed consistent and smooth, executed our pitstop perfectly, and got back out and ran until another car had a mechanical in the last 12 minutes of the race which caused us to roll under the checkered in first for class, behind the pace car.

Watkins Glen is a track steeped in history books of racing and is was track to be deeply respected for its speed and technical nature. I can’t thank the Flying Lizard team enough for their continued superior support in this Super Trofeo series. I’m looking forward to heading the next, and second to last race weekend at the iconic Road America.

Tom Tait (Am)
No. 64 Emerald Center Lamborghini Super Trofeo
The Flying Lizard team prepared a fantastic car for me this weekend. After running in the top 3 for opening practice, we were able to achieve our best race results in the super-competitive AM class at the historic Watkins Glen International raceway this weekend. We are improving every race, finishing P7 and P6, and on the track, we were very close to bringing home two top 5 finishes. We have more pace in the car and we will for sure be bringing it to Road America in August!