“Pirelli World Challenge has enjoyed great success and expansion in the last few years and we’re eager to be a part of it,” said Flying Lizard Motorsports Team Manager Eric Ingraham. “Jim Haughey has built a great operation in K-PAX Racing and the combination of our two teams will no doubt bring an exciting season for our fans as we race for the GT Championship.”

“Teaming up with Flying Lizard was a natural fit for us,” said Jim Haughey, owner of K-PAX Racing. “Our race-proven McLarens and Flying Lizard’s world-class race-team management will catapult us into contention for another championship.”

“This is an exciting next step in the evolution of Flying Lizard,” said Flying Lizard Motorsports Founder Seth Neiman. “Though I will be stepping back from driving, I look forward to the team’s focus on building a great program with K-PAX. They’ve put together a consistently solid program, and have proven they have what it takes to win.” 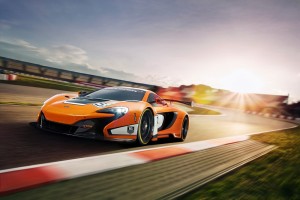 “We’ve always put a strong emphasis on success at Flying Lizard Motorsports, and we’re always looking at the next area of the sport in which we can challenge ourselves and grow as a team,” said Team Manager Eric Ingraham. “Due to our full season commitment of Pirelli World Challenge, a full season in the TUDOR United SportsCar Championship is no longer logistically possible. That said, we’re proud of what we’ve accomplished in the American Le Mans Series over the past decade and during the 2014 season in the TUDOR United SportsCar Championship. The 2015 season will be a new challenge, and a new era for Flying Lizard Motorsports, and we’re thrilled to be racing under the K-PAX Racing banner.”

The McLaren 12C GT3 debuted in North American competition in 2014, celebrating one win and an additional two podiums with K-PAX Racing in Pirelli World Challenge. Continuing their relationship with the manufacturer as a customer team, the K-PAX Racing/Flying Lizard Motorsports team will compete the entirety of the season armed with two brand new 2015 McLaren 650S GT3s. The new machine features a McLaren carbon fiber MonoCell chassis with aluminum front and rear sub frames, creating a lightweight frame, armed with a 3.8L V8 twin turbo engine.

The team will be based in Sonoma, California, utilizing Flying Lizard’s facility at Sonoma Raceway. At race events, the teams will operate out of the K-PAX Racing transporters. Livery design and driver line ups for the two K-PAX Racing/Flying Lizard Motorsports McLaren 650s GT3s will be announced at a later date.

Flying Lizard is based in Sonoma, California, and has competed in the American Le Mans Series for ten consecutive seasons, from 2004 to 2012 in the GT class and in 2013 in GTC, along with the inaugural season of the TUDOR United Sportscar Championship in the GT Daytona class in 2014. The Lizards have won two ALMS GT team championships (2008 and 2009), one ALMS GTC team championship (2013), and have secured three ALMS GT Drivers’ championships (2008, 2009, and 2010). Flying Lizard has also competed in the 24 Heures du Mans from 2005 through 2012, finishing third in 2005, fourth in 2006, sixth in 2008, sixth in 2011, and fourth in 2012. Please visit the team website at www.lizardms.com and the team store at www.flyinglizardstore.com. Follow Flying Lizard Motorsports on twitter, and like us on Facebook for all team updates.

Sonoma, California-based K-PAX Racing was founded in 2007 by Jim Haughey. K-PAX, named after the 2001 sci-fi/mystery movie starring Kevin Spacey, has captured three GT Class championships in the Pirelli World Challenge sports car series (2007 and 2008 in a Porsche GT3, and 2010 in a Volvo S60). K-PAX is the only team racing McLaren sports cars in North America, campaigning two 650S GT3 sports cars in the 2015 season. To follow the K-PAX Racing team during the 2015 season, go to http://www.kpaxracing.com/, or follow the team’s social media feeds on Facebook, Twitter and Instagram.

McLaren GT is the GT race car manufacturing arm of McLaren Group established to develop, build and support the GT racing and track derivatives of the 12C sports car, and the 650S GT3. Based in Woking, Surrey at the former home of McLaren Racing, the company is responsible for the design, development and production of the GT3 variants of the 12C and 650S, the 12C GT Can-Am Edition and the 12C GT Sprint.