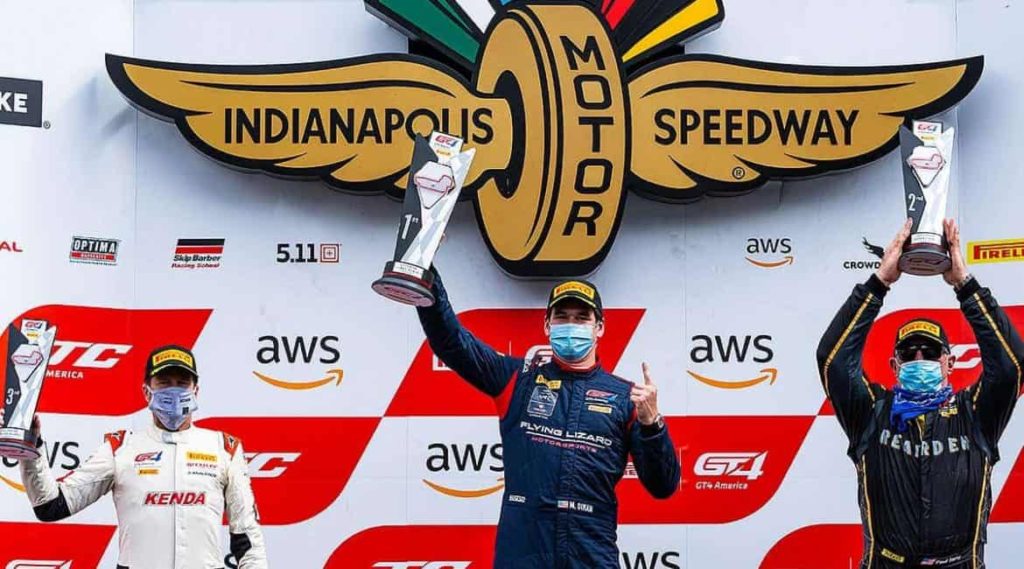 SONOMA, Calif., (October 5, 2020) – Following a climactic conclusion to the 2020 GT4 America season at Indianapolis Motor Speedway, Flying Lizard Motorsports collected four championship titles to add to their illustrious history. Michael Dinan, driver of the No. 210 Aston Martin Vantage GT4 secured the Sprint Am driver championship, and together with co-driver Robby Foley in the No. 21 Aston Martin, clinched the SprintX Pro/Am Championship. Dinan and Foley’s performances, combined with the results from teammates Erin Vogel and Michael Cooper in the No. 30 McLaren 570s GT3, secured Flying Lizard Motorsports the 2020 Sprint and SprintX Team Championship titles, netting the California-based team their seventh, eighth, ninth, and tenth championship titles since 2003.

Dinan’s sophomore year with the team in Sprint and with co-driver Robby Foley in SprintX was nothing short of exceptional. Though Dinan had secured the Sprint title in the previous rounds at Circuit of the Americas, the Sprint Team Championship and the SprintX Driver and Team Championships had yet to be determined heading into the season finale event.

“It was a busy and condensed season and we are so proud of the improvement we have seen in Michael Dinan,” said Law. “He was always able to be fast but needed this season to continue to hone in on his race craft. His co-driver and coach Robby Foley is not only a great driver but knows what it takes to help Michael get the most out of his driving; they really work well together. I know it is cliché, they couldn’t do this without a great team behind them. From everyone in the crew and engineering, we gave them fast cars every weekend and the new Aston Martin Vantage GT4 has been a phenomenal car as well as a great group to work with. We were able to put all the pieces together this season.”

Though Erin Vogel and Michael Cooper had a character-building rookie season together in the SprintX Championship, the pairing’s performances at Road America and Circuit of the Americas were vital to the Lizards securing the SprintX team championship.

“We also have to give credit to Erin Vogel and Michael Cooper, they had some tough luck this year but their good finishes contributed to the overall effort for the team Championship in SprintX,” said Law. “The SRO has done a great job with GT4Amercia. The competition is tough, the racing is good, and this showcases the skill that Flying Lizard Motorsports has. It has been a dream season for us, we can’t wait to get back to it in 2021.”

Sprint Race One
Dinan started sprint race one from third place overall, immediately getting in a close battle with the No. 99 Mercedes AMG GT4 for fifth place. The two touched as they raced side-by-side, sending Dinan off into the gravel, bringing out a full course caution. Dinan pulled into pit lane as the field went back to green, needing a new right rear tire. Damage to the car was minimal, and Dinan was able to continue, running two laps behind the leaders. He finished the race ninth in class, with Flying Lizard still leading the Am championship over Reardon Racing by 23 points.

Sprint Race Two
Dinan started Sprint race two from fourth place. With Flying Lizard Motorsports leading the team championship battle by 23 points, all the team had to do was complete 70% of the race to acquire the title. The field again went three-wide into turn one, setting Dinan up to battle side-by-side, lap after lap with Reardon Racing’s Paul Terry for third place. He made the pass, and charged after Blackdog Speed Shop’s Michael Cooper in second. The two ran nose-to-tail, smoothly racing for second place overall. Cooper expertly held off Dinan until the final lap, when Dinan made the last pass as the two dashed over the finish line. Dinan took second place overall over Cooper by 0.013 seconds.

SprintX Race One
Dinan and the No. 21 Aston Martin Vantage started SprintX race one from fifth. He slipped to sixth on the start following a close battle with the No. 51 of Parker Chase, but by the first full course caution, he assumed the class lead and returned to fifth place overall. Following the restart, Dinan got in a heated battle with the No. 37 RS1 Porsche. The battle for the driver and team championship intensified, as the No. 47 of Matt Travis of NOLASPORT joined the fight, right on the tail of Dinan’s Aston Martin. Travis took the position just before the pit window opened, and all three cars drove into pit lane at the same time. Foley took over to battle for second place in class with NOLASPORT’s Jason Hart, each eager to obtain valuable championship points for the title. Although the Lizards left the pits ahead of the No. 37, a discrepancy in pit lane resulted in Foley being forced to serve a drive-through penalty from second place, moving the championship rival NOLASPORT car up to second. He finished the race in fifth place overall, but still one class position behind the NOLASPORT Porsche, leaving the championship title to be determined in the final race.

Erin Vogel took her start from 19th overall, defending her position as the field roared into turn one. She had a strong start, gaining four spots in the opening laps to run 15th overall and ninth in class before the full course caution. The field had a quick green flag before returning to yellow, but it was enough time for Vogel and the No. 30 McLaren to gain two more spots to restart from 13th overall, and quickly assume 12th place overall and 7th in class. She pitted during the open pit window, with Cooper taking over and joining from 12th place overall. He quickly found himself racing side by side with the No. 50 Panoz, followed by the No. 59 BMW. The battle with the BMW intensified, and the pair traded paint, resulting in the McLaren suffering too much damage to the right rear and side radiator for the car to continue the race.

SprintX Race Two
Friday morning presented the field with the lowest temperatures all week, racing first thing at 8:00AM on a chilly Midwest autumn morning. The pair of Dinan and Foley needed to either win the race or finish two positions ahead of the NOLASPORT Porsche of Jason Hart and Matt Travis in order to secure the championship titles. Foley started from second place, slipping into third after the green flag, with the Porsche several positions back in seventh. Foley got in a heated fight with the No. 37 Porsche of Jan Heylen, resulting in contact and the loss of a position to run fourth, moving the Lizards to second in the championship. He pitted as soon as the window opened, sending Dinan out to make up as much ground as possible. The Porsche pitted a couple laps later, and Dinan’s hard laps paid off, putting him in the lead after the pit window closed. With 18 minutes to go, Dinan held a three second lead over Travis, needing just to stay out front in order to win the title. In the final laps, Travis closed in, but it wasn’t enough. Dinan finished in first place overall with a 0.9 second lead over Travis, securing the SprintX driver championship title with Robby Foley, and the team championship for Flying Lizard Motorsports.

Cooper started the final race of the season from 15th, but was shuffled back to 17th on the start. He pressed on, gaining a position over the No. 17 Porsche, then acquiring another when the No. 71 KTM caught fire in pit lane. A full course caution brought the field back together when two cars collided in turn four. Cooper restarted from 15th overall and tenth in class with 38 minutes remaining. The McLaren was able to race with the pack, but not necessarily fight for position, maintaining 15th until the pit window opened. Erin Vogel took over during the mandatory pit stop, joining 10th in class and 16th overall with 25 minutes remaining. She maintained position until the No. 21 BMW of Sean Quinlan stopped on course with ten minutes remaining. The No. 74 KTM X-BOW was the next car to stop on course, though the race remained green as the car continued. Another spin happened just a few cars ahead of Vogel by Parker Chase with three minutes to go, but she raced on, gaining two more positions before the checker flag. She finished 13th overall and second in class as the checker flag waved for the final time in 2020. In a season filled with adversity, the pair concluded the season with three top-five finishes in class and three-top ten finishes overall.

With the season complete, Flying Lizard Motorsports will enjoy little downtime, with team management already hard at work to build the 2021 Championship. To stay up to date on all Flying Lizard news, visit lizardms.com.

Michael Dinan
It was a great way to end the year here at Indianapolis, with two wins on the last day. The SprintX championship came down to the wire and the pressure was definitely on us, initially tailing Travis and Hart by five points. The team did a fantastic job all weekend and all season long. It paid off, no one missed a beat, and the results speak for themselves. When we came into this season, there was a big change switching form the Porsche to Aston Martin. It was a lot of work for the whole team, as well as myself and Robby. Everyone picked up right away and it was fantastic run straight from the start at Circuit of the Americas. We had reasonable expectations coming into the year, but we never expected I’d finish the season with 17 wins and two championships for myself, as well as two more for the team. I’m really happy to be a part of Flying Lizard’s incredible history, add some team championships to their incredible record of winning. I also want to give a thank you to everyone in my personal life who has made sacrifices to allow me to get here as well as everyone on the team. I’m looking forward to what is to come next season. Stay tuned.

Robby Foley
What an amazing way to end the year for Michael, myself, and Flying Lizard Motorsports. We made it harder than we wanted to after some adversity in race one, but we put our heads down and execute a really god race, winning overall in race two. Michael has come so far in just a year’s time, and as his friend, coach, and co-driver, I couldn’t be more proud of him. Thanks again to the team and to Aston Martin for a great year

Erin Vogel
It was really a highlight to end the season at Indy, with the Indy teams and the 8-hour running their warm ups for the weekend. Had some great battles in Saturday’s race and really enjoyed ending the season with that kind of close racing. Sunday’s race was a bit less eventful, but netted us a decent result and I’m glad we don’t have to do any more come mornings like that this season!

Michael Cooper
We’re walking away from the first year with Flying Lizard Motorsports feeling like there is unfinished business. I’m glad Erin and I could contribute to the SprintX team championship. Overall, it was a tough season, but we pushed through and had some good runs. I’m very happy with Erin’s development over the course of the year. She gained a lot of valuable experience to utilize next season.