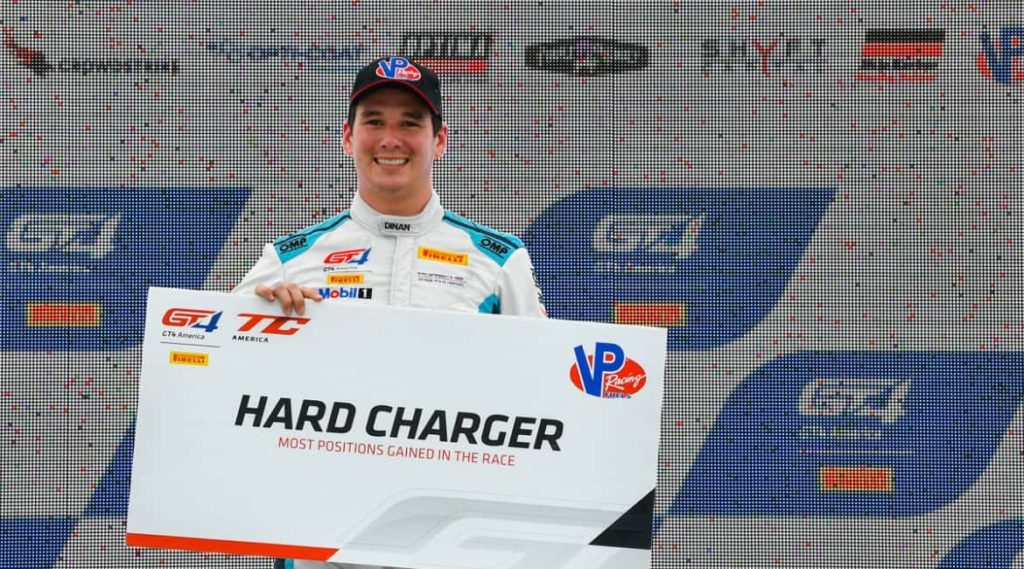 “Michael and Robby did such a great job this weekend,” said Program Manager Darren Law. “We had a podium within our grasp a couple times, but incidents out of our control prevented that from happening. Despite that, we’re all really proud of how everyone performed in all the various conditions and we’ll take that momentum to Vegas next month for the season finale.”

Sprint Race One
The GT4 America field enjoyed sunny skies and warm temperatures for Sprint race one at Road America on Saturday. Dinan and the No. 210 Porsche started 18th overall and ninth in class, and had a clean start, gaining two positions in the opening lap. One by one, he smoothly picked off his competitors, methodically working his way through the field. He climbed up to sixth in class and 13th overall by the checkered flag, earning his first Hard Charger award for gaining the most positions during the race.

Sprint Race Two
Sunday morning, Dinan started race two from eleventh overall and fourth in class under light rain. As the field took the green flag, a larger storm cell moved over the track, and standing water appeared at almost every corner. Fifteen minutes into the race, Dinan had skillfully worked his way up to ninth overall and third in class when he hydroplaned in turn seven. He recovered and moved back a class position. Twenty-two minutes into the race, the session went yellow, and then eventually to red flag. The cars sat in pit lane for some time, and eventually the series called the session early. Dinan and the 210 finished eleventh overall and fourth in class.

SprintX Race One
On Saturday afternoon, the first rain clouds of the weekend opened over Road America, moments before the field left for the pre-race SprintX grid. The late call led to only some of the competitors putting on rain tires, while others opted to stay on their slick tires. The field took the green in light rain, and Dinan had his best start of the season, climbing from 11th to sixth in the first three turns. As they exited turn three, Dinan was making the pass for fifth when the Audi next to him, which opted to stay on slick tires, lost control, and had hard contact with the Flying Lizard Porsche. The move forced both cars off course, and flung the No. 21 Porsche into the tire wall, causing extensive damage, but leaving Dinan unharmed. The incident resulted in early retirement for what was promising to be a podium finish for the young American and Flying Lizard Motorsports.

SprintX Race Two
Following Saturday’s incident with the No. 21 chassis, the team was able to enter the No. 210 Porsche in its place for Sprint race two on Sunday. Because of this change, Robby Foley had to give up his fifth place starting position and instead start the race at the rear of the field from the pit box. As soon as the race started and he was given the all-clear, Foley joined the field and caught up to his competitors. In two laps, he gained three spots, cracking into the top ten overall, and fourth in class. He made it up to ninth before the mandatory pit stop window opened, during which, he brought the Flying Lizard Porsche in for Dinan to assume the driving duties. Dinan rejoined in tenth, and kept pace on a rapidly drying track. End the end, Dinan and Foley finished fifth in class, and tenth overall.

The GT4 America championship will conclude October 18-20 at Las Vegas Motor Speedway. The weekend will feature both the Sprint and the SprintX season finale events resulting in four races for Flying Lizard Motorsports. Once the weekend concludes, the team will participate in the official banquet hosted by the series, celebrating 30 years of motorsport competition. For more information, visit www.gt4-america.com.