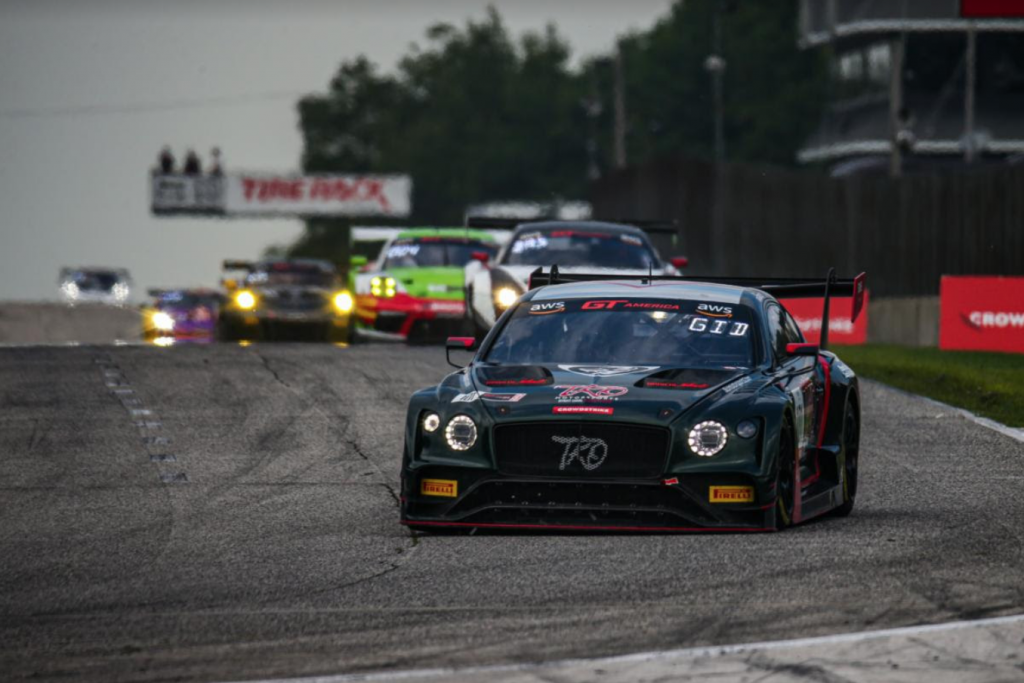 ELKHART LAKE, Wis., (August 30, 2021) — The Flying Lizard Porsche and TKO Motorsports Bentley made a splash at Road America in SRO’s GT America. Andy Wilzoch, driver of the No. 460 Porsche 911 GT3 R secured two class podiums and an overall win, and Memo Gidley, driver of the No. 101 TKO Motorsports with Flying Lizard Bentley Continental GT3 secured second place in class and overall on Saturday.

“We’re all very happy with our return to GT America this weekend,” said Program Manager Darren Law. “It’s always great to see a Flying Lizard Porsche on the podium, and for Andy to get up there twice and get an overall podium. As for Memo Gidley in the TKO Motorsports with Flying Lizard Bentley, we obviously wish the weekend ended on a higher note, but we showed our driver has the skill and the car has the speed. It’s going to be a great reminder to the 2021 season. I’m looking forward to getting back on track.”

SRO3
With a clear last lap in qualifying on Saturday, Gidley was able to jump into second in class and overall for his first race start in GT America with the TKO Bentley. The strong starting position set him up for a smooth race one of the weekend. While maintaining his standing throughout the race, he secured second in class and overall, setting the second-fastest lap time of the race. With race two’s starting position determined by the fastest lap in race one, the quick time positioned the Bentley to start second for Sunday’s race.

Race two on Sunday morning had a strong yet short-lived start. After starting second, Gidley had charged forward to take the overall lead before hitting oil on the track surface early in lap two. The Bentley went off track at turn five and was followed by more than four others. After being pulled out of the grass, Gidley was able to bring the car back to the hot pits under its own power, but mechanically was unable to continue.

“To come out racing for the first time with the Bentley, a crowd favorite and Memo Gidley, a crowd favorite; it’s just so much fun,” said TKO Motorsports owner Dave Traitel. “The two of them make an iconic duo. This weekend we felt the thrill of victory and the agony of defeat. I’m just glad that nobody got hurt and we’ll race another day.”

SRO3 – Masters
Donning the classic Lizard Porsche livery in fresh colors, Wilzoch wheeled his way into the weekend qualifying second in class and fourth overall on Saturday. With the first three-quarters of the race relatively calm, contact with out-of-class Jason Daskalos in the No. 27 Audi set the end of the race into some fierce competition for the overall GT America position. After giving the position back to Daskalos, Wilzoch focused on recovering the lost ground. Retaking position before a full course yellow that stacked the field, Wilzoch fought the remainder of the green race to keep off Jason Harward in the No. 88 Lamborghini, securing second in class and fourth overall.

Starting grid for race two on Sunday, based on race one lap times, proved to be favorable for Wilzoch by the second lap. From his position at fifth overall on the race start, he was able to navigate around oil on track that left the front of the GT America field spun off and disabled off at turn five. Under full course yellow, Wilzoch drove the Porsche through the early race end and checkered flag as first in class and overall winner.

Driver Quotes
Andy Wilzoch | No. 460 Porsche
It was great to be back on track in the Flying Lizard Porsche. Road America is always a great track to come to, and it was great to see so many fans be so enthusiastic to see our car in livery at such a fan-favorite circuit. It was great to get two podiums, but I wish we had more than one full green lap. We had some fun battles ahead, and I was really hoping we could get up to speed and have a good fight. Big thanks to everyone at Flying Lizard for another great weekend.

Memo Gidley | No. 101 Bentley
It was a great debut weekend and opportunity with TKO Motorsports and Flying Lizard Motorsports. TKO has been one of my big backers since I had my big accident at Daytona some years ago and they put me back into a race car first. We had a great run getting our feet wet, finishing second on Saturday. We were pretty close. It was a great opening day for sure.