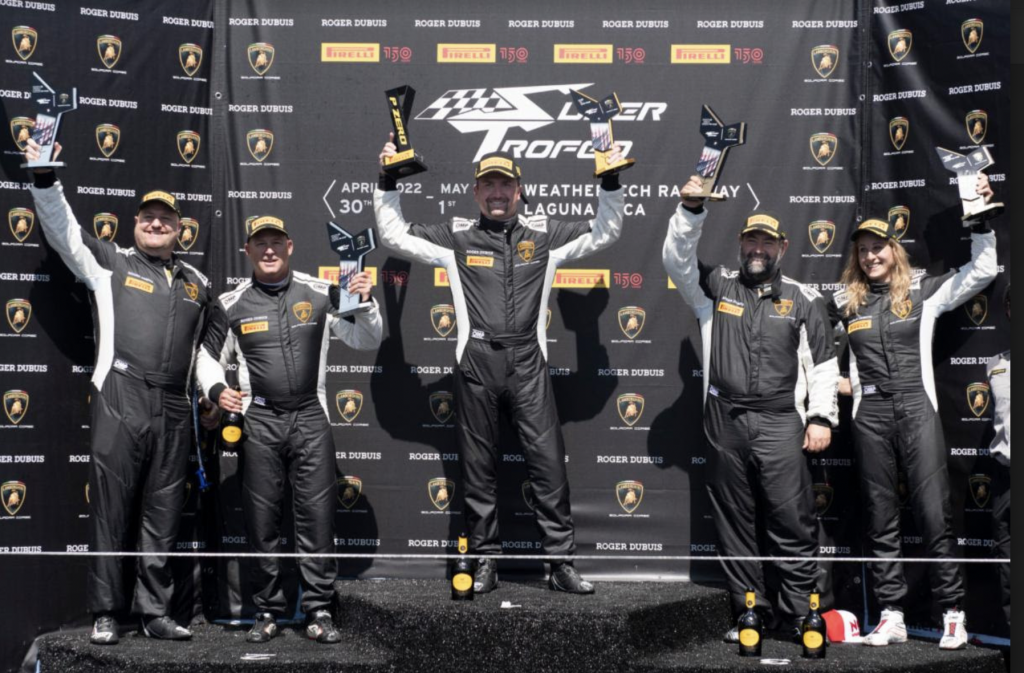 “It was an amazing debut weekend for our Super Trofeo program,” said Program Manager Darren Law. “We were very happy to have the support of Lamborghini Newport Beach, who brought a group of people out to support us in person for this first weekend. I’m very proud of everyone for the work and effort we put in and what we were able to accomplish. It’s always nice to come home with a win, and I’m proud of Slade Stewart and what he did in the LB Cup class. He drove really well as did all of our drivers. Lamborghini has a great series with top-level drivers and teams and we’re looking forward to the next event as we continue to build momentum into the next event.”

A few weeks before the season-opening event, Flying Lizard Motorsports took delivery of the cars for Slade Stewart and Tom Tait, the drivers of the No. 14 and No. 64 Lamborghini Super Trofeo Evo2. The two drivers were able to participate in one pre-season test at WeatherTech Raceway Laguna Seca, using the two-day test to get acquainted with the cars and do the typical shakedown of new machinery. Stewart ran strong in race one, earning a fourth-place finish in the first round. He qualified on pole position for race two on Sunday and held off heavy pressure from the 34-car field to keep the lead all the way to the checkered flag, earning the team’s first win of the year. Tom Tait enjoyed some intense pack racing in the Am class, earning a seventh-place finish in race one, and eighth place in race two.

Brett Jacobson’s No. 11 Lamborghini Super Trofeo Evo2 arrived after the pre-season test, removing any chances of a shakedown before the Laguna Seca season opener. The car turned its first laps in the opening practice on Thursday morning but sat out of the second practice in order to allow for the team to get the car properly prepared and set up for the remainder of the weekend. Brett Jacobson turned his first laps of the year during his qualifying session. He and co-driver Joel Miller used the weekend as a practice round, focused intently on getting comfortable with the car, the circuit, and the procedures. Despite the highly competitive field and sometimes chaotic races, the pair ran well, earning a fifth-place finish in race one.

The Flying Lizard Lamborghini Super Trofeo North America program will next race at NOLA Motorsport Park in conjunction with the team’s SRO America GT4 racing program. The No. 14 of Slade Stewart and the No. 64 of Tom Tait will be the two cars representing Flying Lizard Motorsports, as Brett Jacobson will have a scheduling conflict. Race one will take place on Saturday, May 21 at 4:30 PM CT, followed by race two on Sunday, May 22 at 9:45 AM CT, both airing live on imsa.tv.

Brett Jacobson (ProAm)
No. 11 Giddy Lamborghini Super Trofeo
The first weekend of Super Trofeo is in the books. Obviously, I wanted to do a little bit better, but we know the amount of time one can have in the car is the biggest thing. We got the car and weren’t able to test at all. My very first laps at this track here were during qualifying. The first day was a little rough, but on the second day, I was able to hand over the car to Joel. We both learned a lot this weekend, and we’re very much looking forward to Watkins Glen and getting more time in the car, and scoring some podiums.

Joel Miller (ProAm)
No. 11 Giddy Lamborghini Super Trofeo
Going into the weekend, we got the car late, we got it rolling, and that was the big thing. We knew this weekend would be a practice weekend about everything: the championship, rules, pit stops, all of the above. I’m looking forward to getting going. Unfortunately, we have to miss NOLA Motorsport Park due to a conflict for Brett, but we’re going to get back to rocking and rolling, and definitely some testing because we haven’t even tested this car before. We had the baseline setup on race day because we didn’t even run on Friday. We’re looking forward to Watkins Glen and having our ducks in a row. Brett enjoys the championship and working with the team, which is very important.

Slade Stewart (LB Cup)
No. 14 Lamborghini Super Trofeo
Today was a great day. We were fortunate from a setup standpoint that qualifying put us in a really good position for class today for pole. I worked really hard throughout the balance of the race, even though we had some on-track incidents. We had a full course caution for the race, which bunched us all back together again. I just went running after it and was giving it everything I had. If it weren’t for the Flying Lizard team and all of the masterful technicians that support us, and the great crew, we wouldn’t be here. I have to thank them. We’re here at a wonderful facility, WeatherTech Raceway Laguna Seca on Lamborghini Super Trofeo’s opening weekend. With a fifth-place finish yesterday, and a win today, we’re looking forward to seeing how LB Cup runs this year.

Tom Tait (Am)
No. 64 Emerald Center Lamborghini Super Trofeo
It was a fantastic weekend. The competition was much better than I thought it would be. There are some really talented drivers in the series and it was great to get used to the team and the cars. I think we have a lot of room to grow as the season goes on.