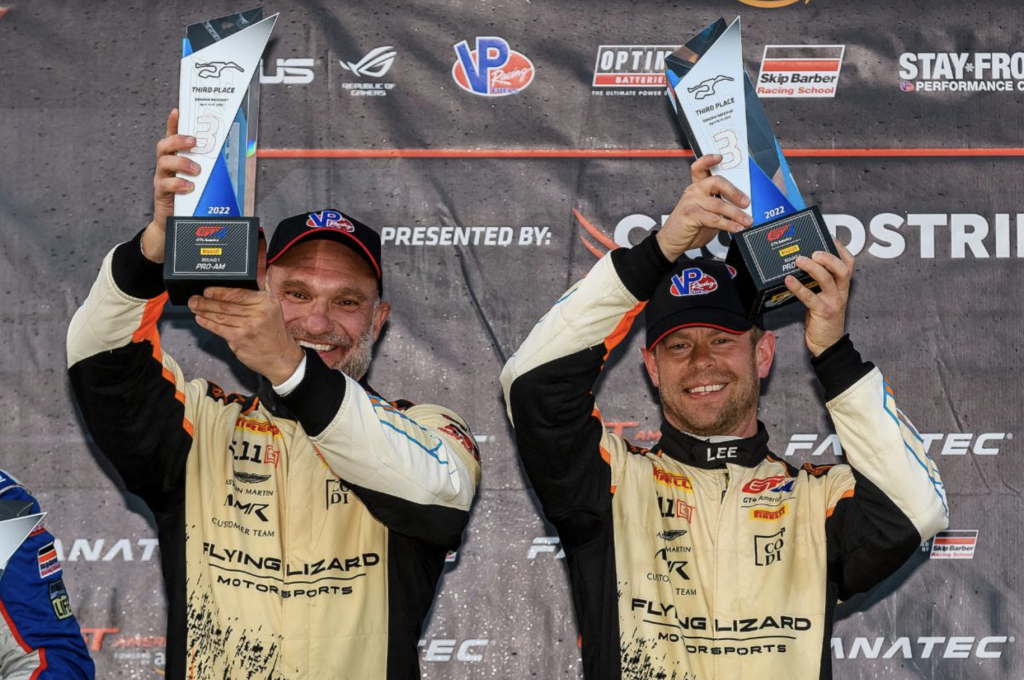 SONOMA, Cali., (April 17, 2022) – Flying Lizard returned to the Pirelli GT4 America and GT America powered by AWS this weekend at Sonoma Raceway, starting the new season off with another podium finish at their home track. The Sonoma-based squad raced a pair of Aston Martin Vantage GT4 cars in the two series with team newcomers Elias Sabo and Andy Lee, competing in four races on Saturday and Sunday.

“It was a great start to the 2022 season,” said Program Manager Darren Law. “Competing in two race series simultaneously can be quite demanding, but both Elias and Andy were able to get a lot of track time in our new cars. We had a great start to the race weekend and couldn’t be happier to have a podium finish in our first race weekend at our home track of Sonoma. Although the second day of racing didn’t produce the results we wanted, both Elias and Andy showed a lot of speed and we saw the performance capability of the team and the car as well as the potential of what we can do. I am really looking forward to the rest of the season. “

Pirelli GT4 America
Elias Sabo took the green flag for race one in the No. 8 Aston Martin Vantage GT4 in 11th position, and before completing a full lap, the race immediately went yellow, temporarily pausing racing activities for an incident on track that dropped oil in the carousel. Sabo settled into 13th on the start, but gained back a spot, passing the No. 69 of Todd Coleman and taking 10th place before another incident brought out red flag. All running ceased while safety marshals cleaned up an incident on track, and after a substantial break, racing resumed. Sabo pitted in the mandatory window, allowing Andy Lee to get in the Aston Martin and take over for the remainder of the race. Once all pit stops cycled through, he found himself in fourth, but 0.6 seconds behind the No. 47 of Jason Hart. For the final 15 minutes of the race, the two raced nose to tail. Lee made the pass in the final lap, securing a third-place position for Flying Lizard Motorsports. The podium result gave the team ample momentum, excited to face day two of racing where the pair would start from sixth in the pro/am class.

The second day of racing failed to go as planned for the Flying Lizard duo. Though Lee started sixth in class and eighth overall, the packed field made it difficult to gain or maintain ground. He safely dropped to tenth on the start, knowing he could gain background throughout the race. A lengthy caution ate into the race clock, preventing further progression for Lee’s stint. Sabo took over from Lee during the mandatory stop and put on a great show battling for ninth position. Unfortunately, the battle led to final lap contact, resulting in a 14th place finish.

GT America powered by AWS
After qualifying in a mixture of wet and dry conditions, Elias Sabo set a fast lap to start GT America race one in 15th position in the GT4 class. He had a strong start, climbing up to ninth, chasing the No. 930 Audi R8 of Steve Dinan. A full course caution interrupted his climb, but after the field went back go green, he climbed one more spot, taking eight place in his first GT America race with Flying Lizard Motorsports.

Sabo and the Lizards had high hopes for GT America race two from their third place starting position. However, the front leaders held up the field on the start, resulting in a bit of mele in the opening laps. The scuffle dropped the No. 8 Aston Martin down the field, where the car was hit by a competitor as Elias tried to regain lost ground. The contact caused damage to the car, resulting in the Lizard entry retiring early.

The series will race next at Ozarks International Raceway May 20-22. The 3.97-mile, 19-corner track is a new addition to the SRO America sanctioning body. Nestled in Gravois Mills, Missouri, the new circuit will offer exciting action as all competitors learn the circuit, eager to continue the battle for the championship titles. For more information, visit https://www.sro-america.com.

Elias Sabo
It was a good start to the season with a podium finish on Saturday. We had a good pace and the Flying Lizard team performed exceptionally well. Andy and I are looking forward to the Ozarks.

Andy Lee
I’m so proud of our team effort on Saturday! Standing on the podium to start the season is such an awesome feeling. The team delivered a great car and near-perfect pit stop. They made it easy for Elias and me to reach the front of the field.

Porsche Sprint Challenge by Yokohama
The team also raced the Porsche Sprint Challenge North America this weekend, entering four Porsches in the single-make series. Chris Bellomo swept the weekend in his Porsche 992, clinching both class and overall wins in the pair of 40-minute races. Mike Gaulke also swept the Cayman class, and Paul Nemschoff picked up a pair of second-place finishes in his 991. Paul Bonderson earned a second-place finish in the Cayman class on Saturday, contributing to the Lizard’s success on their home race weekend.