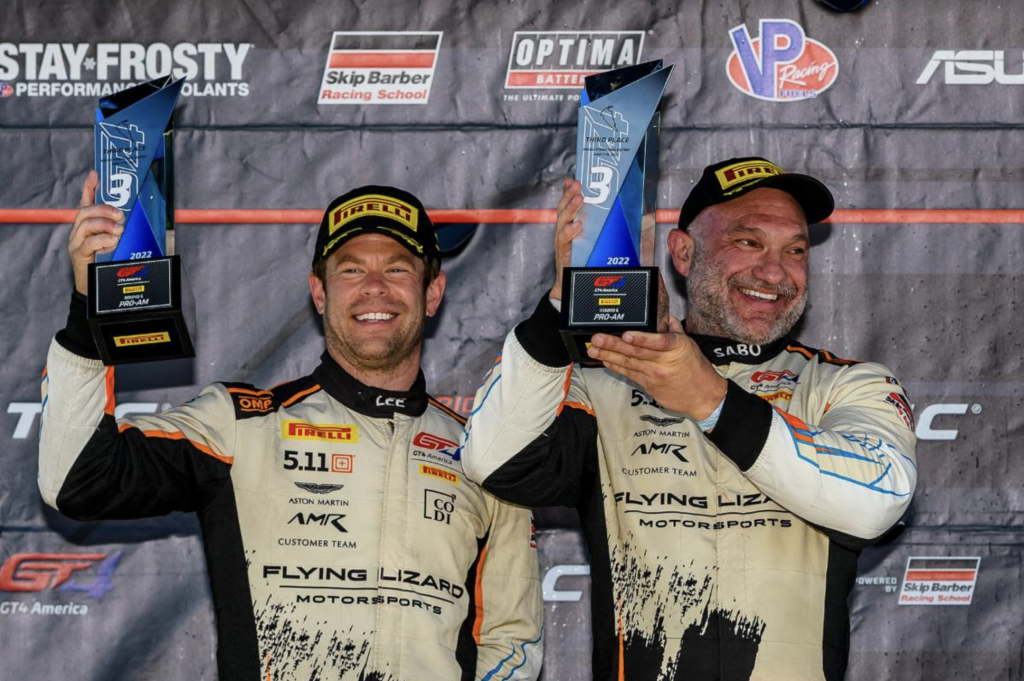 “This was one of our best weekends so far this year,” said Program Manager Darren Law. “It is unfortunate that we had so many yellow flag laps because we didn’t get the chance to show our true potential. Both cars were fast all weekend long. Andy had the fastest race lap on Saturday and we took our second podium of the year on Sunday. Part of our program this year is getting Elias comfortable with the Aston Martin and working on his speed and racecraft and he took a big step forward this weekend. We have some additional testing coming up and look to bring this positive momentum to the next race at Watkins Glen.”

GT America powered by AWS
Created as a single-driver, 40-minute sprint championship, the GT America series provided a fun arena for bronze-rated drivers to race for top bragging rights this weekend at VIRginia International Raceway. Elias Sabo and the No. 08 Aston Martin Vantage GT3 started from sixth in class, and 16th overall in the 26-car field. In the first two laps, he gained four overall spots, still racing from his starting position in class, though reeling in the car ahead. An early full course caution forced the field to take a breath, following the leader until the racing resumed. Once it did, the battles got heated, with Elias putting heavy pressure on Chris Gumprecht in the Mercedes AMG GT4. Sabo stayed consistent and continually progressed with every lap, earning a fifth-place finish in the tight GT4 class.

He started race two from ninth position, with a little more work needed to climb to the front. He settled into tenth at the start, staying close to the rear of the No. 67 of Jose Dasilva. His lap times continued to improve, hauling to run a tenth of a second faster than the race leaders. A full-course caution came out with eleven minutes to go, allowing the field to bunch up and have a three-minute sprint to the checkered flag. He earned a sixth-place finish, gaining three positions during his quick, 40-minute sprint.

Pirelli GT4 America
The GT4 America season had little green flag racing this weekend, as a series of full-course cautions and even a very lengthy red-flag period consumed the time on the race clock. Elias Sabo started race one from 11th place, and a lengthy caution ate up most of his drive-time. The race eventually went back to green, and Sabo pitted, allowing the No. 8 Aston Martin to make its mandatory driver change to Andy Lee. He joined the race in tenth, quickly working his way up to seventh by the next full-course caution. , Another full course caution expended Andy’s green flag racing time, but not before he earned the award for the fastest lap of the race.

Because Sabo started race one on Saturday, Lee would start race two on Sunday, taking the green flag from ninth place in the Pro/Am class. A chaotic opening lap led to over an hour-long red flag, completely suspending all track activity until the facility was able to complete track clean-up and repairs. The race restarted with 40 minutes remaining, and Lee was able to enjoy just a handful of green-flag laps and get to eighth position before the next full-course caution appeared. An excellent pit stop and driver change during the pit window rocketed Sabo up to fifth place overall, and third in class. Yet another full-course caution interrupted Sabo’s run to fight for a higher result, though he was able to hold off heavy pressure from the No. 39 of Chris Cagnazzi. The team took great pride in their second podium finish of the season, gaining momentum from their strong results.

The GT America powered by AWS and Pirelli GT4 America will race next at Watkins Glen International, July 22-24. The Lizards earned a pair of third-place finishes at the course last season and will bring their three-car Lamborghini Super Trofeo program to the fan-favorite course next weekend, racing in support of the IMSA WeatherTech SportsCar Championship. For event information, visit imsa.com and gt4-america.com.

Elias Sabo
VIR was a great weekend for us. Andy posted the fastest lap on Saturday, and we followed that up with a podium on Sunday. Credit to the Flying Lizard team for providing us with an exceptional car to drive.

Andy Lee
Sunday’s podium was truly a team achievement! Elias and I have the best team in the paddock. It feels like we get stronger and more cohesive every weekend.