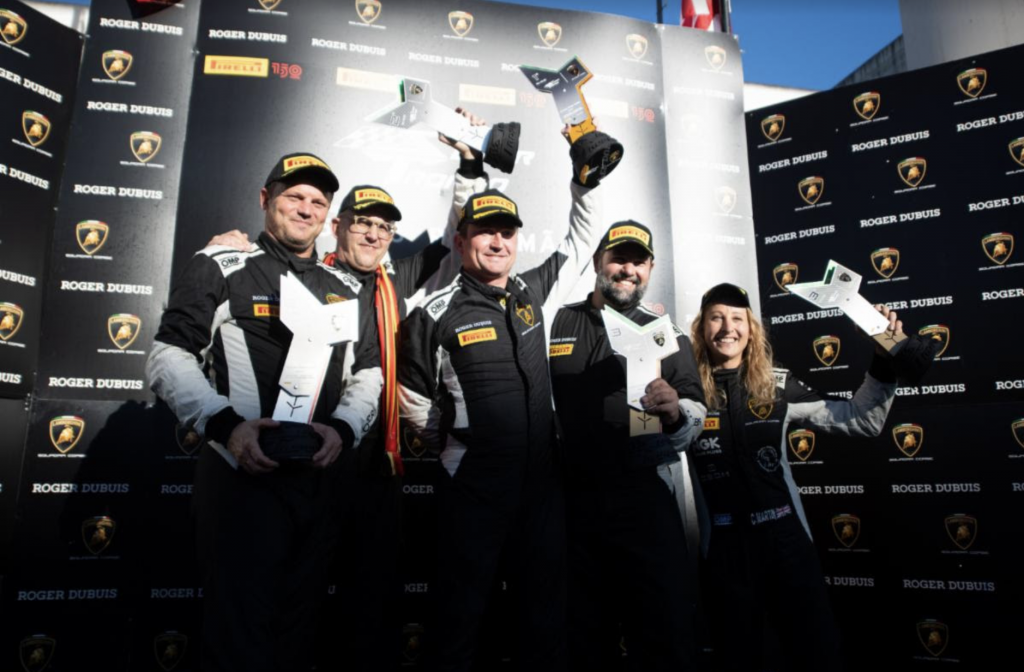 PORTIMAO, Portugal. (November 8, 2022) – Flying Lizard Motorsports secured its 16th professional sports car racing championship in Portugal this weekend, celebrating the success of Slade Stewart, driver of the No. 14/114 Lamborghini Huracan Super Trofeo Evo2. The team participated in the two-season finale races for the IMSA-sanctioned Lamborghini Super Trofeo North America championship with drivers Stewart and Tom Tait, driver of the No. 64/164 Lamborghini. At the conclusion of the North American championship, the group went on to compete in the Lamborghini Grand Finals against the manufacturer’s European series.

“This has been an extremely successful inaugural season in the Lamborghini Super Trofeo Series for us and we couldn’t have written a better finish,” said Team Owner Darren Law. “I have to thank all of the Flying Lizard crew, our drivers Slade Stewart and Tom Tait, and Lamborghini Newport Beach for making this season both successful and fun. We raced in many different series, and I am very impressed with what Lamborghini Squadra Corse has put together. To come away with the number of wins, podiums, and a championship in our debut season shows the level of commitment and quality of the Flying Lizard organization and we look forward to announcing plans for 2023 very soon.”

The flowing turns of Algarve International Circuit in Portimão, Portugal offered the perfect landscape for the season-concluding event. The track’s sweeping elevation through the hills of the property created exciting racing for the competitors. Though the circuit was new to the entire Flying Lizard team, the drivers and coaches of the organization used the two days of testing early in the week to learn the circuit, preparing for the final championship showdown.

Tait, driver of the No. 64/164 Lamborghini Huracan Super Trofeo Evo2 had the best drive of his career at Portimão. Regardless of the final results, his performance in the final four races was some of his strongest of the season. Tait climbed as high as second place, setting the fastest laps of his rookie season in the Lamborghini Super Trofeo North America series. He earned his fourth top-five finish of the year in round one in Portugal. He came into his own, gaining a new level of comfort in the car, continuing his season-long progression to the front of the Am class. His growth as a driver in his rookie season provides strong momentum to whatever may lay ahead in 2023.

With three wins, Stewart and the pink unicorn Lamborghini entered the weekend leading the driver points battle in the Super Trofeo North America series. His weekend got off to a rough start in the final practice when the car lost control, spinning off the track. Extensive damage caused the points leader to miss both qualifying sessions, starting the pair of races from the rear of the field with a not-so-pink Lamborghini. A failure in the right rear axle took the points leader out of the opening race, closing his points gap over the field. In race two, Stewart drove from last to second place, securing the 2022 Lamborghini Super Trofeo North America LB Cup driver championship title. Equally impressive and challenging was the battle for the Grand Finals title. With a win in race one and a close battle until the final lap of race two, Slade missed the title for the Grand Finals by just a few points and finished with second place in the championship, an impressive run against the combined group of US and European drivers.

Together, Tait, Stewart, and the Lizards earned 16 top-five finishes in 14 races, earning five pole positions, eight podium finishes, and four wins, making it a successful debut season for the team in the North American one-make championship.

Slade Stewart
The US Finals and Grand Final championship races in Portimão were absolutely amazing. We had our challenges and had to fight really hard but in the end, we came away with the LB Cup championship and finished in second place in the Grand Finals championship. This series is the pinnacle of spec series racing and Lamborghini pulled out all the stops to make it an event to remember. I have to thank Flying Lizard Motorsports for the immaculate support, Andy Lee for the amazing coaching all season, and my wife and children for being so supportive of my racing programs.

Tom Tait
It was an epic week here in Portimão, Portugal for the Lamborghini Grand Finals, essentially the world championship. We had a fantastic result in the North American races with a fifth and sixth place finish in classes and ran as high as second place in race one. I had a fantastic time. The weekend was epic overall. The European races were difficult, challenging, and fun. That was some of the hardest racing I’ve done in a long time. I truly enjoyed it. I got to know the car and had some great coaching from Corey Lewis. Flying Lizard Motorsports is the best team in the business. My teammate Slade Stewart won the North American LB Cup championship, giving Flying Lizard and Lamborghini Newport Beach a fantastic victory in their first year. I look forward to more years of this type of challenging racing.