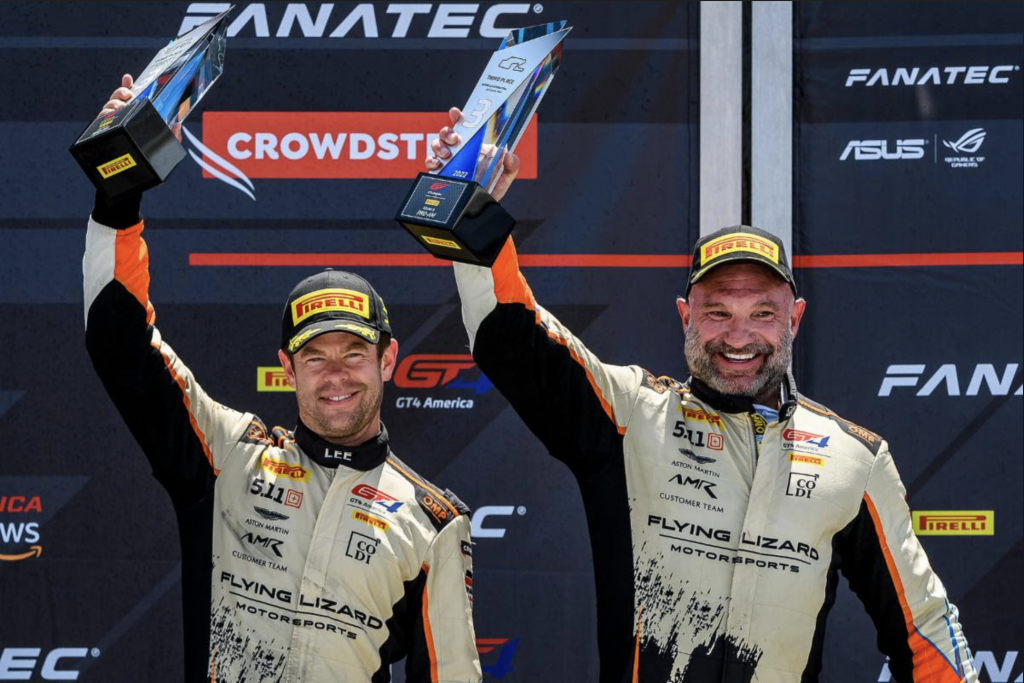 Watkins Glen, N.Y. (July 25, 2022) – Flying Lizard Motorsports closed out another strong weekend in the SRO-America sanctioned series of GT America powered by AWS and Pirelli GT4 America. The pair of No. 8 Aston Martin Vantage cars the Lizards entered for the weekend produced podium-worthy runs, and the team closed out the weekend with drivers Elias Sabo and Andy Lee celebrating the continuation of their podium streak.

“This was our best weekend of the year so far,” said Program Manager Darren Law. “The team is really firing on all cylinders now, from engineering to crew to drivers. Elis has improved so much in all aspects of his driving. He and Andy Lee are really working well together, and it shows. We ran at the front of the pack in all four races, qualified well, and brought home two podium finishes. I am excited to see what the remainder of the season holds.”

GT America Race One
Elias Sabo started race one from sixth place in the GT4 class on Saturday afternoon. An incident with another car on the start heading into turn one resulted in contact, though both cars continued. He worked his way up to fourth place, navigating the caution periods to fight for a podium spot with Adam Adelson in the No. 120 Porsche. Sabo held off heavy pressure from Jason Bell in the No. 2 Aston Martin as the race produced a three-car battle for the final podium spot. In the heat of the battle, race control called Sabo in for a one-minute stop-and-hold penalty for the incident on the race start. With minimal time remaining in the race, the team was unable to make up the lost track position, finishing 16th in the GT4 class.

GT America Race Two
The GT America field kicked off Sunday’s racing festivities at Watkins Glen, with Elias Sabo and the No. 8 Aston Martin taking the green flag from fourth in class. He had an impressive move on the start, passing on the outside of Todd Coleman to take third in the GT4 class. He pulled away and masterfully held position throughout the 40-minute race but contact from another car in the final laps dashed all hopes of a podium finish. Sabo was able to save the car and recover, but with little time left to race was resigned with a 13th-place finish.

GT4 America Race One
Sabo took the green flag for GT4 America race one from fifth position, eager to make up for the misfortunes that took place earlier in the afternoon in his GT America race. He enjoyed a clean start, moving the Flying Lizard Aston Martin up to fourth place. Sabo maintained position to the end of his stint, pitting during the mandatory pit stop window to hand the car over to pro co-driver Andy Lee. Due to a mishap during the pit stop, Lee lost several positions, finding himself fifth in class, eager to pass the No. 120 Porsche of Elliot Skeer. A full course caution came out, bringing the field back together, and on the restart, Lee made the pass on Skeer to take fourth place. More motivated than ever to make up lost ground, he set his sights on race leader Ian James. The final 11 minutes of the race produced one of the best GT4 battles of the season, with Lee, Skeer, James, and two other drivers in a five-way battle for the lead. In the end, Lee closed out the nail-biter in third, earning a third podium for him and Sabo.

GT4 America Race Two
Hungry to keep the podium streak alive and after a masterful qualifying effort by Lee just missing the front row by hundredths of a second, the Lizards excitedly started the final race of the weekend from third place, hoping to gain early ground in the 60-minute race. An unfortunate full-course caution absorbed about 15 minutes of green flag race time, but as the field went back to green, Lee was able to gain a position and move up to second place. Lee ended his stint and maintained second, pitting to give the racing duties over to co-driver Elias Sabo. Sabo joined the race in second and held the position throughout the majority of his stint. The final laps of the race produced an epic battle and came down to the last corner of the last lap. Elias held second position entering the front straight coming to the checkered flag, but the Mustang of Edgar Lau got a slightly better run off the final corner and was able to get by Elias at the finish line. The competitor took over second position by a mere tenth of a second moving the Flying Lizard Aston to its finishing position of third place. The result marks the pair’s third consecutive podium heading into the next race weekend at Road America, August 19-21. For event information, visit roadamerica.com.

Elias Sabo
This was a great weekend here. I had my family here and technically this is my home track because I grew up in upstate New York. To get two third-place finishes here is just really awesome. We’re on the accent. The team has given us a great car. Owen Hayes just continues to improve the vehicle and I couldn’t be happier.

Andy Lee
This weekend is just a huge leap forward for the team. We’ve never had two podiums in a row in a weekend, so they’re just giving us a car that can be upfront consistently now. That’s going to be such a positive going into Road America.