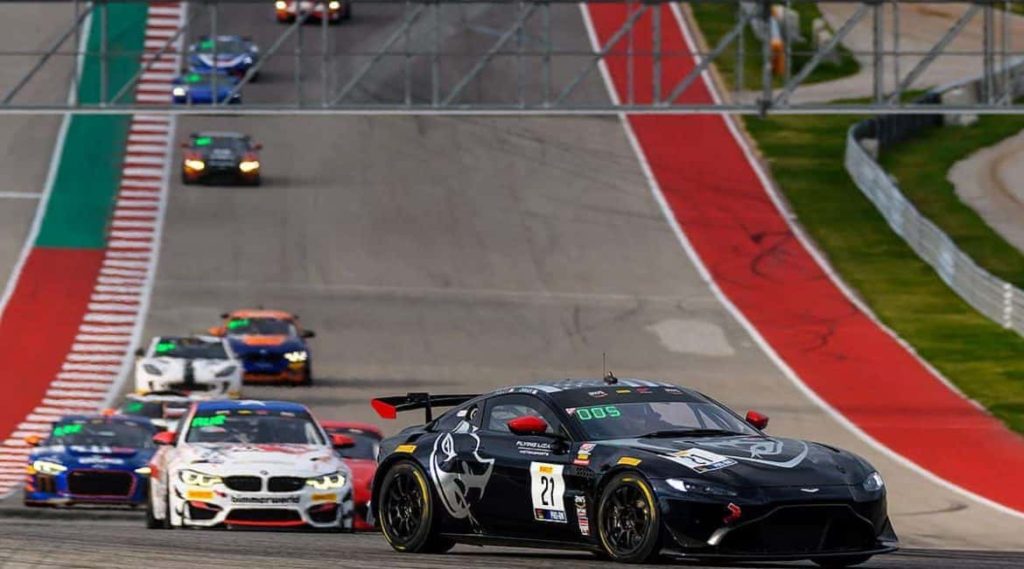 AUSTIN, Tex., (March 9, 2020) – Flying Lizard Motorsports returned to Circuit of the Americas in victorious fashion at the opening weekend for the 2020 GT4 America championship. After securing three podiums in four of the Sprint and SprintX races, the sports car racing team earned its 100th podium in professional competition. Racing two Aston Martin Vantage GT4 cars and one McLaren 570S GT4, the Lizards successfully executed one of their busiest weekends to date, in what will be a packed 2020 race season.

“This year will be a big year for us as an organization, so to be able to start it off with our 100th podium is a special moment,” said Program Manager Darren Law. “Michael Dinan has really improved as a driver over the last year, and he seems well suited for the Aston Martin. Robby Foley has proven to be an excellent co-driver for him as well, and the two make a complimentary pair. Erin Vogel had great SprintX debut performance with her McLaren. If it weren’t for a little bit of bad luck, she and Michael Cooper would have possibly been on the podium with their teammates. I’m looking forward to the rest of their season.”

Sprint Race One
No. 210 Aston Martin Vantage GT4 | Michael Dinan
Started P2 in class; Finished P1 in class
Tire conservation was the name of the game for Michael Dinan and the No. 210 Aston Martin Vantage GT4 after starting in second place in the Am class. For the majority of the race, Dinan stayed close to the No. 59 Aston Martin of Paul Terry looking to set up a pass when possible, but he stayed primarily focused on preserving his tires for a final lap push. His patience paid off in the last lap in turn 11 when Paul Terry made a mistake, allowing Dinan to surge forward and run to the finish line, earning his first GT4 America win.

Sprint Race Two
No. 210 Aston Martin Vantage GT4 | Michael Dinan
Started P2 in class; Finished P2 in class
The final race of Sunday afternoon proved to be one of the most competitive events of the weekend. Dinan started the race from fifth overall and throughout the first half of the race ran in a five way battle for position. Lap by lap, he raced nose to tail with the No. 57 Aston Martin for the AM class lead. A pair of mid race full course cautions allowed Dinan to take advantage and make the pass for the class lead. He held the position until the final lap when the No. 59 capitalized on a moment and made a charge in the second half of the course. In the end, the No. 59 took the win by 0.053 seconds.

SprintX Race OneNo. 21 Aston Martin Vantage GT4 | Michael Dinan and Robby FoleyStarted P3 in class (Dinan); Finished P5 in class (Foley)
Dinan took the green flag in the No. 21 Aston Martin in sixth place, but a competitive field shuffled him back on the start. He recollected and pushed forward, quickly within a short distance of sixth. As he charged forward, contact from behind sent the Aston Martin spinning, but Dinan expertly recovered to rejoin with minimal damage from 15th overall. He got in the groove and by the time the pit window approached, he was able to pit from 13th to allow for Robby Foley to take over. Foley immediately got to work, breaking into the top 10 with 22 minutes remaining. He picked off the next few competitors one by one, finishing eighth overall and fifth in the Pro/Am Class.

No. 30 McLaren 570S GT4 | Erin Vogel and Michael CooperStarted P13 in class (Vogel); Finished P6 in class (Cooper)
Erin Vogel started her first GT4 America SprintX race of her career in 13th in the class, and although she was initially shuffled back two positions on the start, she found her groove and reclaimed her position just a few minutes later. She fought side by side with a McLaren for position and pitted during the mandatory window, allowing Michael Cooper to begin his stint at the wheel. Cooper rejoined in 12th, and was able to climb two spots to bring home a tenth place finish overall, and sixth in class.

SprintX Race Two
No. 21 Aston Martin Vantage GT4 | Michael Dinan and Robby FoleyStarted P5 overall (Foley); Finished P2 overall
SprintX race two at Circuit of the Americas got off to an aggressive start with a highly energized GT4 field. Robby Foley started from fifth overall in the No. 21 Aston Martin GT4 and found himself in an intense battle with the No. 71 KTM X-BOW for fourth position. After several nail biting side by side moments, Foley took the position and pulled away. A full course caution temporarily paused the race, grouping the field back together. Foley had a strong restart, taking third place from Kenton Koch. The top eight cars continued to race in a tight back, trading positions with each turn of the track. Foley pitted in sixth overall, second in class. Dinan took over after a smooth driver change, and rejoined the field in second place overall. As the minutes remaining counted down, Dinan ran clean and consistent laps, maintaining is comfortable gap over the third place car. He crossed the finish line in second, earning his second podium of the weekend, and his first SprintX podium of the year with co-driver Robby Foley.

No. 30 McLaren 570S GT4 | Erin Vogel and Michael Cooper
Started P16 overall (Cooper); Finished P10 in class (Vogel)
Starting in the middle of the field, the No. 30 McLaren had an impressive opening, with starting driver Michael Cooper jumping from 16th to fight for 10th in the opening laps. The GT4 America competitors showed aggressive moves, and the No. 30 McLaren was forced to make an unexpected pit stop when the battles resulted in a flat right front tire. He pitted under caution and was able to rejoin in 28th position. He caught back up to the rear of the field and was able to climb a few spots before making the mandatory driver change. Erin Vogel took over from 25th position, and put in an impressive and consistent run to finish in 17th overall, while also earning a top ten finish in the Pro/Am class.

Flying Lizard Motorsports will next compete on the streets of Long Beach, California at the Long Beach Grand Prix. Erin Vogel and Michael Cooper will return for round two of the SprintX championship. For full schedule information, visit gt4-america.com.