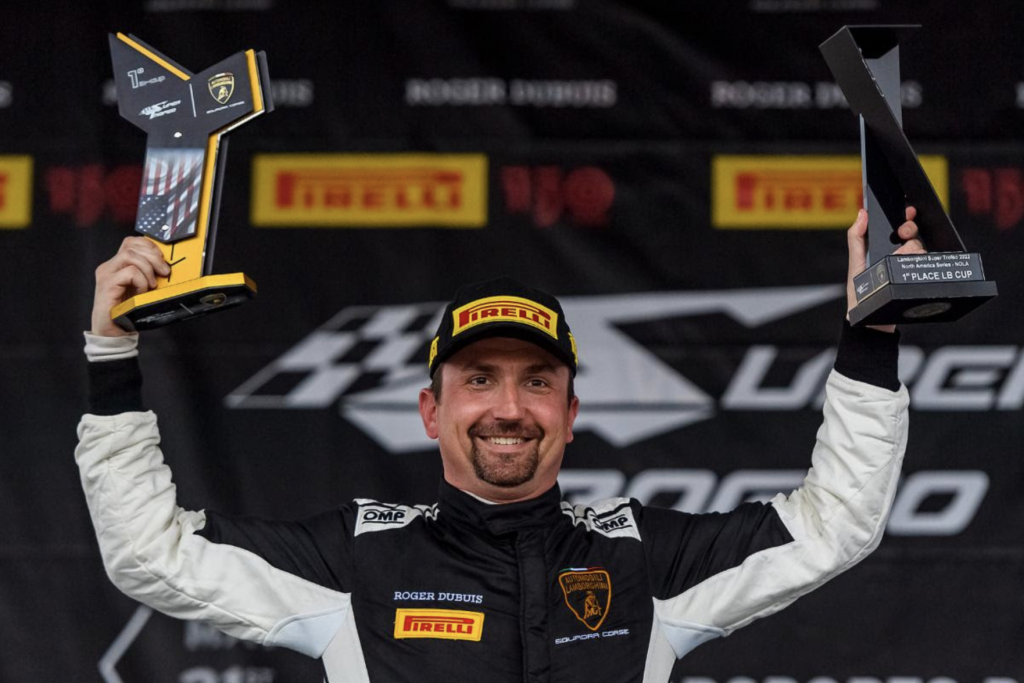 NEW ORLEANS, L.A. (May 23, 2022) – Louisiana turned up the heat this weekend at NOLA Motorsports Park, as Flying Lizard braved the high temperatures to run a doubleheader race weekend for both Lamborghini Super Trofeo North America and Pirelli GT4 America powered by AWS. The highlight of the weekend for the team came from the No. 14 Lamborghini Super Trofeo Evo2 of Slade Stewart, who earned a class win in race one, and followed up his performance with a second-place finish the following day in race two. The team’s Aston Martin Vantage GT4 earned a top-ten finish in what was a challenging race weekend on the 16-turn, 2.275-mile circuit.

Pirelli GT4 America powered by AWS
The double-header at NOLA Motorsport proved to be a character-building event for the team’s Aston Martin program in GT4 America. The team started race one from pit lane, serving a penalty delt by the sanctioning body for an incident in the previous round at Sonoma Raceway. With Elias Sabo at the wheel, the No. 8 Aston Martin Vantage roared from pit lane to join the field at the drop of the green flag, and a mid-pack collision on the front straight allowed the Flying Lizard machine to quickly catch the rear of the field and gain five positions. The race immediately went full course caution to allow for safety workers to clear the track, and at the same time, a large storm cell quickly moved over the circuit. The 60-minute race was temporarily halted via red flag, and all participants on-site at the New Orleans circuit sought shelter until it rolled through. The race later went back to green on a damp circuit, rooster tails chasing each machine, with 33 minutes remaining. The field had one green lap of racing until an incident brought out another full-course caution. The Lizards called Sabo in to pit under caution for the mandatory driver change, closing out his stint in tenth out of 13 cars in the Pro/Am class. Andy Lee, the professional driver in the Pro/Am lineup, took over the Aston Martin Vantage GT4, joining the race still under caution. Competitors continued to circle the circuit, but track conditions failed to improve, and the circuit still required lengthy repairs. The SRO America officials decided to end the race early, and Flying Lizard Motorsports earned an eighth-place finish in the Pro/Am class.

Andy Lee started race two from fifth place in the No. 8 Aston Martin Vantage GT4. At the drop of the green flag, Lee dug in and had a strong fight with Kenton Koch in the No. 15 Aston Martin, racing side by side for position. In the end, Lee kept fifth and held position to the mandatory pit window. Sabo took over, joining the race in fourth, running with the pack with 20 minutes to go. As he fought for a podium position, Sabo was hit and spun by another car, and the Flying Lizard Aston Martin was unable to finish the event.

“It was an unfortunate end to the weekend because we had a good car and felt confident coming into the NOLA event,” said Program Manager Darren Law. “In race one, Elias did a nice job overcoming starting from the back of the field and put us in position to finish inside the top 10. Andy had a nice start in race two, and both he and Elias had solid stints. We know we have a good car, and the team is really working well, so I am confident it won’t be long until we are back on the podium.”

GT4 America next races in Danville, Virginia June 17-19, with GT America returning to race alongside after missing the NOLA round. Flying Lizard Motorsports will enter an Aston Martin Vantage GT4 in each series, with Elias Sabo and Andy Lee campaigning the GT4 America car, and Sabo as the sole driver in the GT America entry.

Lamborghini Super Trofeo North America
The 34 competitors of the Lamborghini Super Trofeo series took the green flag for race one after a large storm cell moved through on Saturday afternoon. The No. 64 Lamborghini Super Trofeo Evo2 started the race from 12th in the Am class, and teammate Slade Stewart started the No. 14 Lamborghini from pole position in the LB Cup class. Both drivers started the race on rain tires, but as the field continued to circulate on the track, the course began to dry. Tait climbed up two positions to run in the top ten in his class by the time the race reached the halfway point and drivers were required to pit for their mandatory pit stop. With the course rapidly drying, Tait opted to use the stop to replace his rain tires with racing slicks, allowing him to run the dry racing line on course. He gained another two positions by the drop of the checkered flag, finishing eighth in the weekend’s opening race. Stewart and most of his other LB Cup competitors opted to stay on the rain tires, which drastically slowed their lap times on the damp circuit. Despite the tire choice, Stewart and his pink unicorn Lamborghini were able to keep the class lead over the competition, earning his second win of the 2022 season.

Race two started in warm, but dry and sunny conditions, with Tait beginning from 12th in the Am class, and Stewart from third in the LB Cup class. Tait showed strong speeds from the get-go, climbing to ninth in class in the opening laps. His strong lap times remained consistent, and when he reached his mandatory pit stop, he had climbed to fifth. Race officials logged his pit stop time as under the minimum required time, forcing him to serve a drive-through penalty. He quickly acquiesced, and his drive-through pit lane moved him back to 11th in class. He rejoined his competitors, eager to gain back lost round, but ultimately lacked the amount of time to gain any more positions. Meanwhile, Stewart climbed to second place, where he finished, bringing in his third podium of the 2022 season. Stewart’s successful weekend solidifies his lead on the LB Cup class point standings, with a 12-point gap over Jon Hirshberg.

“We continue to have great results in our first season in the Super Trofeo Series,” said Law. “We are still gaining knowledge on what works from a setup standpoint with this car, but again Slade drove great and brought home two podiums. Tom has shown a lot of progress and was on equal race pace with most of the field in his class. They are both getting more and more comfortable with the cars and the team, I am looking forward to the rest of the season.”

Slade Stewart (LB Cup)
No. 14 Lamborghini Super Trofeo
NOLA was an eye-opener in many ways. It was an unknown track to a lot of, if not all of the drivers, so in that regard there was a lot of balance in the race days. On the other hand, weather played a key role in how Race 1 and 2 went down. The extreme humidity of the south increased fatigue levels immensely, our car included. It was incredibly humid inside the cabin that was over 110 degrees throughout the race. Saturday’s race was delayed due to a torrential downpour, that forced a start on rain tires, which had a diminishing rate of grip far above slicks as the track dried out. We were happy with the outcome, finishing P1 in class for the day. Sunday was exceptionally humid given the prior days rains, which was very challenging to deal with, we started P3 and ran hard, finishing P2 in class. Overall it was an exceptional weekend from a performance standpoint, and we are looking ahead to Watkins Glen.

Tom Tait (Am)
No. 64 Emerald Center Lamborghini Super Trofeo
The racing in the 2022 Lamborghini Super Trofeo Championship AM Class is always super competitive and extremely challenging. I love it because it is no ordinary amateur racing series. The drivers are extremely fast and with 620 horsepower there is always something to learn. This weekend we learned a new track, started a race under wet conditions, after a deluge from a driving rainstorm, changed to dry tires mid-race, passed many cars and successfully completed the first of two races. In race two we raced hard and moved up in class quickly. I think that this weekend’s experiences moved us closer to the podium finishes we are working diligently to achieve. The Flying Lizard Motorsports crew did a fantastic job!