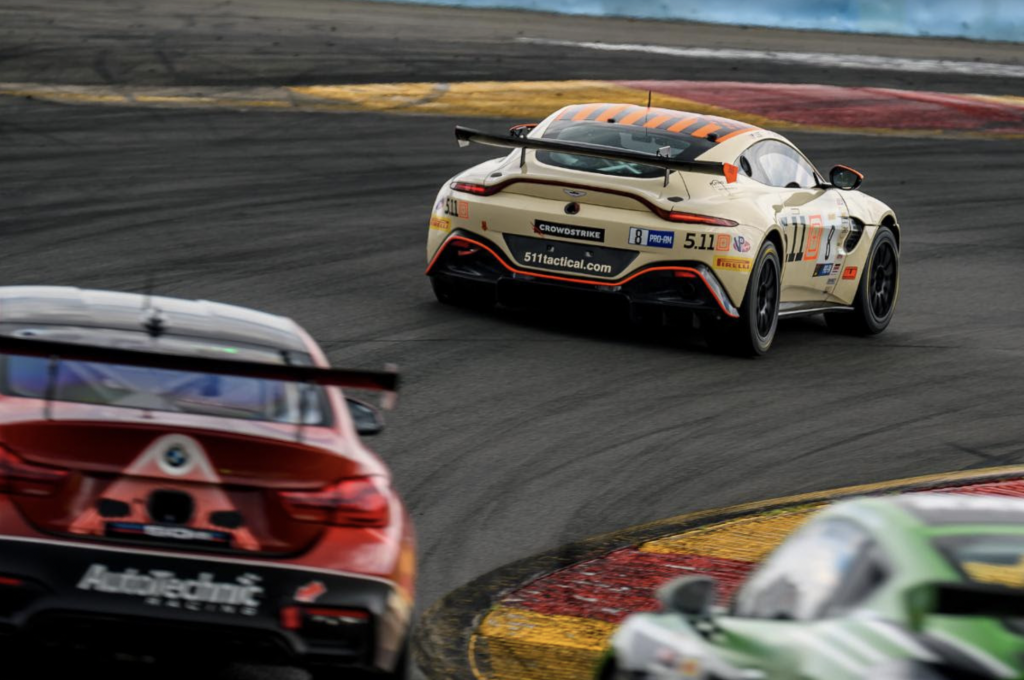 ELKHART LAKE, Wis,. (August 16, 2022) – Following a productive double-podium weekend at Watkins Glen International, the drivers and team members of Flying Lizard Motorsport journey to Road America in Elkhart Lake, Wisconsin for the next two rounds of the GT America powered by AWS and Pirelli GT4 America championships. Racing a pair of Aston Martin Vantage GT4 cars with race car drivers Elias Sabo and Andy Lee, the team will be closing out their third event at Road America in four weeks after their Porsche Sprint Challenge and Lamborghini Super Trofeo efforts previously raced on the fan-favorite road course.

“I’m really looking forward to this upcoming weekend,” said Program Manager Darren Law. “Road America is one of the greatest tracks in the United States not only to race on, but the entire atmosphere during the race weekend is amazing. Moving into the second half of the season, the point battle is close, the Aston Martin Vantage GT4 is really working well. Elias, Andy, and the entire team have been on such a great run since the start of the year, and we have a lot of momentum coming into this weekend.

The weekend will begin with the annual Fanatec GT World Challenge Parade and Welcome Party in downtown Elkhart Lake. Featuring a race car parade from the circuit to Siebkens Resort, live music, an autograph, and race cars on display, beginning at 5:00 PM Eastern.

GT America powered by AWS
Though he put in one of his best race performances all year, while racing for podium positions the previous two rounds of the GT America series at Watkins Glen, did not go as expected for Sabo. After contact from other cars set back the No. 8 Aston Martin to finish further down the charts, Sabo will be fired up, ready to rebound this weekend at Road America. Twenty-seven competitors will participate in the weekend in the SRO3, GT2, and GT4 classes. The Bronze-only series holds two races per weekend, each running for 40 minutes. Race one will begin on Saturday, August 20 at 12:15 PM CT, and the series will conclude the weekend with race two on Sunday, August 21 at 9:00 AM CT. Both races will air live on YouTube.com/GTWorld.

Pirelli GT4 America powered by AWS
In Pirelli GT4 America, Sabo and Lee share the No. 8 Aston Martin Vantage in a pair of 60-minute races, each driver competing in half of the race while his co-driver completes the other half. Sabo and Lee make a formidable duo, celebrating three podium finishes in eight races. Still hunting that first win, the Flying Lizard pair have momentum on their side, riding into the weekend on a streak of three consecutive podiums. Both Sabo and Lee had their best qualifying sessions in the previous rounds at Watkins Glen International, with Sabo starting the first race in fifth and Lee from third. The team’s continued success brings them up to fifth in the Pro/Am class team standings, just three points away from fourth place. Thirty-five cars will compete in this weekend’s set of races, with race one beginning on Saturday, August 20 at 4:05 PM CT, followed by race two on Sunday, August 21 at 11:10 AM CT. Both races will air live on YouTube.com/GTWorld.

Elias Sabo
No. 8 Aston Martin Vantage GT4
We are looking forward to the upcoming races at Road America. We had great success at Watkins Glen with a double podium weekend. Flying Lizard continues to give us an exceptional car to drive.

Andy Lee
No. 8 Aston Martin Vantage GT4
We’ve been riding a wave of podiums and it feels like we’re gaining serious momentum heading into the Road America weekend. Despite our recent success Elias and I know we have to work harder than ever to continue our progress. Thankfully for us we have the best team in the paddock!