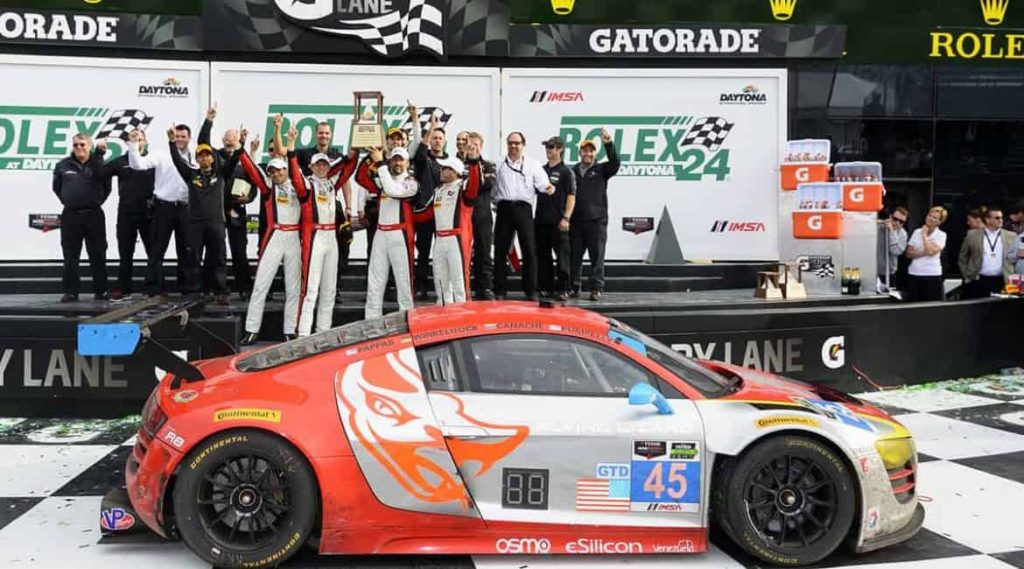 We at Flying Lizard Motorsports recently celebrated our 15th year in professional competition, and throughout the year, we asked our fans to submit what they would nominate as their favorite Lizard memory of all time.

Over the course of ten days, where we hope you all are following the recommended precautions regarding stopping the spread of COVID-19, we’re going to share with you the top ten nominated moments.

While this may be a favorite moment for our fans, it’s still one of heartbreak for our team. After a full 24 hours of racing at Daytona International Speedway, Flying Lizard Motorsports was able to place both of its cars in the top-5 in the GT Daytona class at the season opening Rolex 24 at Daytona, the first race of the TUDOR United SportsCar Championship. The No. 45 was awarded the win, their first at the historic racing event, but several hours later, the win was revoked.

Markus Winkelhock took the final stint in the No. 45 Flying Lizard Audi and was able to put on a thrilling late race battle against the No. 555 Level 5 entry. Despite contact in the Bus Stop turn within a few laps of the checker, Markus was able to mount another charge. With a bent right front suspension and broken wheel, the lead swapped back and forth with the No. 555 and attempting one final pass of that car which ultimately ended in the No. 555 forcing Markus to the grass with a half lap remaining, resulting in the No. 45 crossing the finish line in second, but being awarded the win after a penalty was served to the No. 555.

Though the results were declared final following the normal post-race tech inspection, the penalty was lifted a few hours later, making the No. 555 the winner, and the No. 45 second.

The No. 45 Flying Lizard Porsche started from the pole at the Acura Sports Car Challenge at Mid-Ohio and never looked back, leading GT2 for the entire two hour and 45 minute race. The win marked five wins in a row for the duo of Jorg Bergmeister and Patrick Long, and tying the ALMS record for most consecutive wins.

The win came after a risky call where strategist Thomas Blam kept the car on track during the final full course caution, opting not to take fuel with the rest of the GT2 field. While the call may have not been the deciding factor in the race, it helped the team keep a large gap over the next car.

After months of private testing and tire development, Flying Lizard Motorsports and new partner Toyo Tires put their hard work to the ultimate test in 2015, entering into the 25 Hours of Thunderhill. After 25 continuous hours of racing, Toyo Tires and Flying Lizard Motorsports not only emerged as the ES class victors, but as overall champions of the longest endurance event in North America. In the three years to follow, the team earned six more class victories and four overall wins.

Jorg Bergmeister set a new DP record of 1:40.099 at the Daytona International Speedway today, putting the No. 45 Flying Lizard Porsche-Powered DP on the overall pole for Saturday’s Rolex 24 race. Despite the car clocking in the fastest laps and holding the lead for many hours, the No. 45, driven by Jorg Bergmeister, Patrick Long, Johannes van Overbeek and Seth Neiman retired from the 2011 Rolex 24 at Daytona in Hour 23, with just 90 minutes left to go in the 24-hour race. The car retired due to engine issues, a result of earlier contact.

From 2004 to 2013, Flying Lizard never finished outside the podium at Lime Rock Park, earning six wins in the ten races in the American Le Mans Series. With drivers Rodrigo “Digo” Baptista and Nate Stacy, the Lizards celebrated two more wins and an additional podium finish to add to the Lime Rock record, marking the first Pirelli World Challenge GTS win for the California-based team. The victorious weekend holds another special meaning for the team, as the first professional win under the ownership of Darren Law, Tommy Sadler, and Thomas Blam, who took the company over from founder Seth Neiman in December 2014.

In the most famous sports car race in the world, the 24 Heures du Mans, Flying Lizard Motorsports finished third in GT2 and 14th overall in their Le Mans debut. Johannes van Overbeek, Lonnie Pechnik and Seth Neiman stood on the podium at the historic event, in which only 60 percent starting teams completed the race.

“We ran a very strong, solid race. We focused from the beginning on being consistent, with as few errors as possible. A broken air jack set us back slightly early on, but we were able to push back to third place for the last quarter of the race,” said van Overbeek. “We are so excited: a podium finish at our first race at Le Mans! It hasn’t really even sunk in yet.”

After 88 starts in the American Le Mans Series, team founder Seth Neiman earned his first series win in 2013 at the Grand Prix of Baltimore, alongside co-driver Dion von Moltke. The No. 44 avoided an opening lap crash that resulted in the race being red flagged for extensive track clean up, shortening the race by 50 minutes. The No. 44 restarted from fifth place, and strategy from pit lane combined with clean driving during a chaotic race brought Neiman and von Moltke across the finish line in first place, earning the team’s third win in seven races.

Flying Lizard commissioned California-based artist Troy Lee to design a commemorative livery for the No. 80 and No. 81 Flying Lizard Porsches for the 2011 24 Heures du Mans. The liveries celebrated the history of Porsche at Le Mans, featuring the 28 drivers who have won the 24 Heures du Mans overall in a Porsche. The No. 80 and No. 81 designs were identical, implemented in complementary colors: candy metallic orange for the No. 80 and candy metallic blue for the No. 81; both anchored by a deep ocean blue. The primary colors provided a backdrop for the driver names and flags which weaved throughout the design on the Porsche 911 GT3 RSR.

It was a classic manufacturers’ battle between Porsche and Ferrari in GT2 in the 2007 twelve-hour endurance classic, the Mobil 1 12 Hours of Sebring. In one of the largest GT2 fields in ALMS history, the Flying Lizard No. 45 Porsche (Jörg Bergmeister/Johannes van Overbeek/Marc Lieb) battled the entire race against the No. 62 Risi Ferrari, playing a cat and mouse game in which the two cars switched positions more than a dozen times.

It became a contest of wills, playing out in an unbelievable near photo finish between Jörg Bergmeister and Jaime Melo. In the last 30 minutes of the race, Jörg gained more than 30 seconds on the Ferrari, finally passing Melo on the final turn just yards before the finish, only to have Melo regain the position with a hard bump to Jörg which nearly sent him into the wall. Jörg finished the 12-hour race just two-tenths of a second behind the No. 62, the closest finish in Sebring class history at that time.

Back in the ALMS days, Laguna Seca used to be a four hour race, and the Flying Lizard and Corvette Racing rivalry was strong.

In the final 20 minutes of the race, Jorg Bergmeister’s No. 45 Porsche had a seven second lead over the No. 3 Corvette, and ten minutes later the gap became less than four seconds. Bergmeister narrowly avoided disaster when coming into Turn 11 when the No. 15 prototype got loose and braked hard, forcing Bergmeister to brake. Luckily he was able to keep from impacting the wall, but had flat spotted his tires. This allowed the No. 3 to close the rest of the gap and they were bumper to bumper with just a few laps remaining. Over the next seven minutes, the two cars drove nose to tail, making contact on nearly every corner and trading positions several times as the No. 3 Corvette tried unsuccessfully to get by.

With two laps to go, both cars were neck and neck on the front straight with the No. 3 on the inside when the No. 3 suddenly went off track, short cutting through pit lane to overtake Jorg, which was not allowed by IMSA rules. Race control notified the cars to switch positions and Jorg retook the lead.

Starting the final lap, it was clear that both drivers were giving it everything they had to cross the finish line first. It came down to the last hundred yards: the two cars flew through Turn 11, the No. 45 in the lead, when the No. 3 Corvette made contact with the rear of the No. 45, placing the Corvette next to the No. 45 on the inside going down the front straight. As they neared the finish line, the No. 3, now nearly touching the inside wall, but still slightly behind the No. 45, pushed to overtake the No. 45 on the inside. The No. 3 moved to go past the No. 45, but without enough room to maneuver, the two cars made contact, sending the No. 3 spinning across the track in front of the No. 45, with a hard impact into the far concrete wall. The No. 45 took the win, with the No. 3 second. This moment continues to be a hot debate among sports car fans, and takes the top spot for the fan-nominated top 10 moments from our first 15 years of racing.