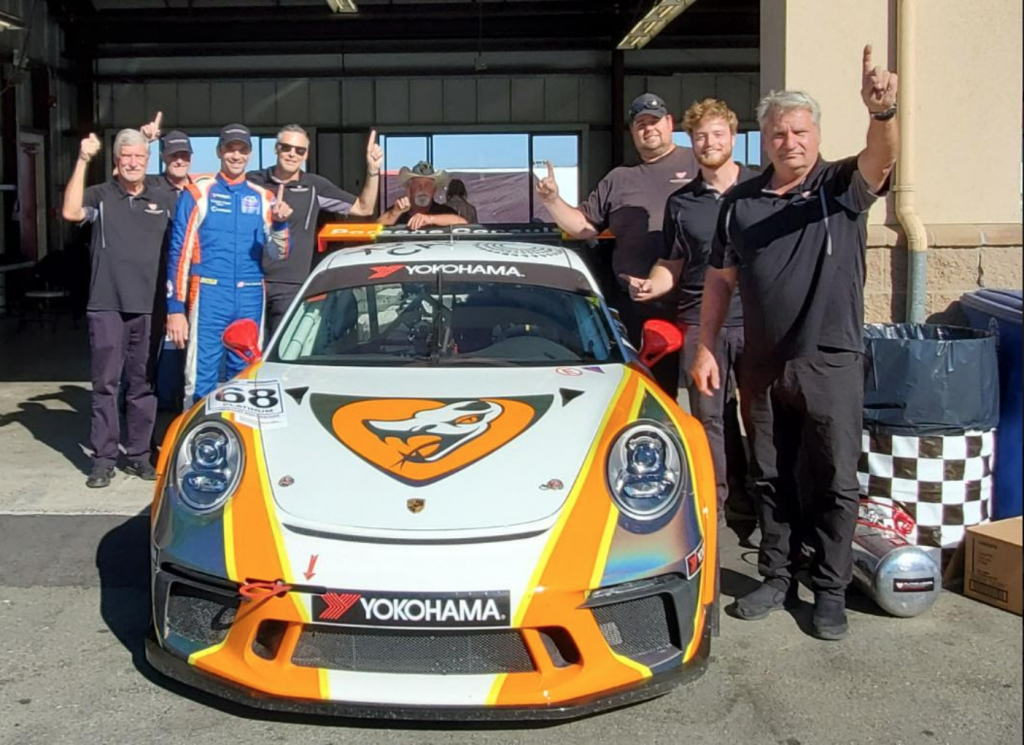 SONOMA, Calif., (October 20, 2021) – As Flying Lizard Motorsports concluded the 2021 GT America Powered by AWS championship at Indianapolis Motor Speedway last weekend, the team’s effort in the Yokohama Drivers Cup raced to the year’s end as well. The season finale was a success, with drivers Chris Bellomo and Mike Gaulke winning their respective championships in the Platinum and Silver classes. Between five drivers in eight events, the Lizards celebrated a total of 22 wins and an additional 29 podium finishes.

“This has been such a memorable season for us in the Yokohama Drivers Cup,” said Program Manager Darren Law. “To return for another year in this series and have our two full-season drivers win both of their class championships makes a statement about our team and drivers. The crew worked hard all season and I am proud of what we accomplished.”

Chris Bellomo’s growth from his first season with the Lizards to winning the championship is a testament to the customer racing program and the expert coaching of former Lizard driver-turned-coach Johannes Van Overbeek. After finishing sixth in last year’s championship, Bellomo continued to grow as he gained more racing experience in his Porsche 991 GT3 Cup car earning eight wins and an additional 10 podiums in 2021. Looking for continued growth through additional challenges, Bellomo has also raced in the Porsche Carrera Cup North America Presented by the Cayman Islands this season at Road America and will return for the season finale event at Road Atlanta in support of Petit Le Mans.

“Winning the Yokohama Driver’s Cup Platinum Championship was our goal at the start of 2021 and we did it,” said Bellomo. “It certainly would not have happened without the incredible support of the Flying Lizard team around me. This year provided many challenges, to say the least, but a huge thank you to Dieter Beuhler, who had my car in perfect condition before every race. The success we had this year would not have been possible without the support and tutelage from my coach Johannes. In a year filled with lessons to be learned each weekend, his patience and perspective allowed me to grow as a driver and put us in a position to succeed in every race. The year went by far too quickly but I am already looking forward to 2022. Thank you for a great year Flying, Lizard!”
As Chris Bellomo stood atop of the GT3 Cup ranks, Flying Lizard driver Mike Gaulke did the same in GT4, racing his Porsche 718 Cayman GT4 Clubsport. Despite being new to two of the eight venues on the calendar, he got up pace quickly with the help of coach Thomas Merrill. In 22 events, Gaulke drove to podium finishes an impressive 20 times, securing both the Silver Class championship as well as the overall points championship.

“The 2021 Yokohama Drivers Cup season is one I will long remember, said Gaulke. “Winning the Silver Class Championship and the Overall Season Points Championship is very special. I want to acknowledge and thank Flying Lizard Motorsports, my crew chief Cris Weber, and my coach Thomas Merrill whom all helped make these wins possible.”

The two championship winners add their titles to the previous five won by Flying Lizard drivers in the series since first joining with their customer racing program in 2018.

“Both drivers have progressed so much in their driving this year, it is hard to imagine what else we could have done,” concluded Law. “Our goal all along was to go for the Championship in both classes. We also have several other drivers that run with us that are also progressing well, in Paul Bonderson and Paul Camusi, and we are looking forward to seeing them improve and go for more wins soon as well. The crew worked hard all season and I am proud of what we accomplished. We are looking for to fighting for Championships again next year.”