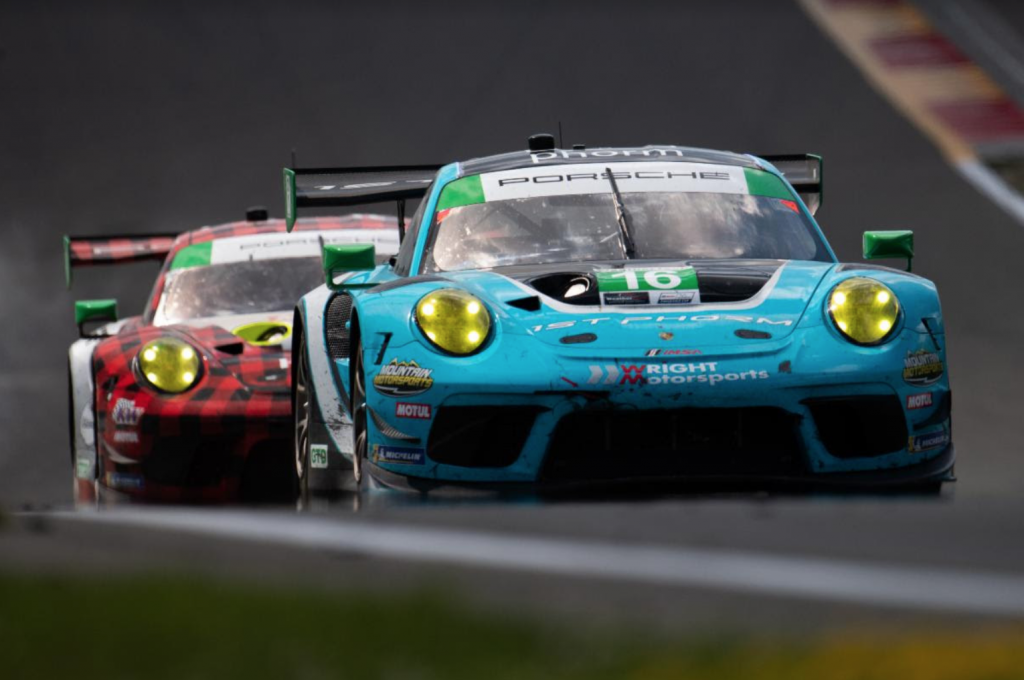 “Everyone did an excellent job this weekend,” said Team Owner John Wright. “We say it often here, but from strategy to engineering, mechanics, and drivers, everyone did exactly what they were supposed to do. I’m very proud of everyone and proud of the organization we’ve built. While a couple of cautions threw a wrench in some of our plans, we still had some great, clean racing, and our cars came home without any damage, ready to fight next week, right back here at the amazing Watkins Glen.”

IMSA WEATHERTECH SPORTSCAR CHAMPIONSHIP
After securing a second-place qualifying position for the headliner race, hopes were high in the Wright Motorsports camp at the start of the Sahlen’s Six Hours of the Glen. Trent Hindman took the green flag in the No. 16 Porsche 911 GT3 R, staying in second place until the restart after the first caution, taking the lead from the No. 14 Lexus of Kyle Kirkwood, roughly 20 minutes into the race. From there, the blue, black, and white Porsche executed pit stops and racing flawlessly, staying out front as each lap’s fuel targets were carefully calculated.

Hindman raced for two and a half hours, then pitted from first to hand the driving duties over to Jan Heylen. The team’s fuel strategy and a flawless pit stop allowed the Porsche to exit the pit lane with a large gap ahead of the competition. Heylen also enjoyed a smooth, trouble-free stint, hitting his fuel targets and leading the race when he handed the car over to Patrick Long. Playing a different fuel game and short filling their tank, the No. 14 Lexus of Jack Hawksworth exited ahead, taking the class lead. The Wright team never worried, sticking to their fuel targets knowing they’d have the upper hand as the field approached their final stops.

Everything changed when a full-course caution came out with one hour remaining, dramatically shifting everyone’s fuel game. As some cars opted to stay out and risk running out of fuel, the majority of the field came in to pit for fuel. As the final stop cycled through, the Wright Porsche sat sixth in class, but third on their particular fuel strategy. In the end, the cars that stayed out and up front were able to save fuel under the lengthy caution and avoided a final stop. Despite intense racing in the final stint by Patrick Long through a congested field, the Wright Motorsports Porsche finished eighth in the GTD class, a result not reflective of the flawless and highly competitive run by the drivers and crew.

Following the conclusion of the weekend, the team will stay on-site to prepare for another week of racing at Watkins Glen, with the WeatherTech 240 on Friday, July 2. For more information, visit imsa.com.

Patrick Long
I’m disappointed with the end result. It’s not reflective of everyone’s efforts today. Unfortunately, where that yellow fell, it was a game of track position. We couldn’t convert on the first five hours of the day, and we just battled as hard as we could at the end there. The No. 14 Lexus, the No. 9 Porsche, and ourselves were locked in, thinking the other cars would fade or run low on fuel, but that never happened. These are the days where you don’t win championships, but you can sure lose them trying to do something that isn’t there. I had to swallow my pride there at the end and bring the car home.

Trent Hindman
An unfortunately timed yellow flag caught us out on an ideal strategy to fight for the win. The Wright Motorsports guys gave us a great car in traffic, which around here in the heat is always a hard thing to do, no matter who you’re up against. Our execution on pit lane was unreal. No penalties, no mistakes, just an unfortunate situation with a horribly timed yellow for us. Once you get shuffled back in the order with 40 minutes to go on a high-speed track, you really have to wait for people to make mistakes to move forward. It was bad luck all around. Big thanks to the Wright guys. I love working with Patrick and Jan. I’m learning a ton. Big thank you to 1st Phorm, Mountain Motorsports, Una Vida Tequila, and everyone for making it happen.

Jan Heylen
Today was a disappointing result for the whole team after a strong qualifying and a strong start to the race. It just wasn’t meant to be today. The strategy didn’t come our way in the end with those final yellows. Great job by the whole team, and thank you to Ryan, 1st Phorm, Una Vida Tequila, and Wright Motorsports for putting us in this championship.

MICHELIN PILOT CHALLENGE
Heading into the Watkins Glen weekend, the high temperatures were the focus for Wright Motorsports in Michelin Pilot Challenge. Race day proved to be a hot one, but the No. 16 Porsche 718 Cayman GT4 Clubsport, with the expert set up by the crew and strong performance from drivers Ryan Hardwick and Jan Heylen, proved to be strong and ran in the top five, securing a fourth-place finish after starting in sixth. Hardwick ran a long opening stint, a change in strategy based on the cautions that came out as the race progressed. An off-sequence pit stop moved the team from the top ten to 21st position, but Hardwick drove an impressive stint, making his way back up to 14th by the next caution. Jan Heylen took over at the halfway point, with two hours remaining, joining the fight in 16th. As the race clock wound down, the team played an alternate fuel strategy, working their way up to the top ten in the final hour. With just 30 minutes remaining, Heylen turned up the heat, fighting hard from sixth to fourth, without enough time to catch third. The team earned a strong fourth-place finish, moving them up from seventh to fifth in the Michelin Pilot Challenge GS Team Championship standings.

The Michelin Pilot Challenge effort will also stay on-site for the next week of racing. The Sahlen’s 120 at the Glen will take place on Friday, July 2, beginning at 2:35 PM. For event information, visit imsa.com.

Ryan Hardwick
As we crossed the finish line, it shows us in fourth place, and a top-five result was our target. Our car struggles in this heat a little bit compared to some of the other cars in our class, but we were able to run in the top five for most of the race. We had a few challenges, but nonetheless, a top-five finish leaving a four-hour race is good for us and we’re looking forward to the sprint race next weekend.

Jan Heylen
It was a long day. Going into that last yellow, everything was going according to plan. We were off strategy from the rest of the field, and Ryan drove a really good long stint. The car was definitely not the easiest to drive in the heat of the day, so Ryan did great managing that. We decided to go off the strategy to get track position, and the plan came together with a half-hour to go, and we were back in third. It was as good as we could have done, given the pace of the other cars. Then we got passed on the final wave by a few cars and things got a little messy under that full-course caution. We dropped back a few positions and from there it was an uphill battle to get those positions back. Finishing fourth isn’t the worst result, but we were hoping to make some ground in the championship. We did on some cars, but the BMW is one of the contenders and they finished in front of us. Not the best day, but not the worst day. You can’t win them all, but I would have loved to be on the podium. We’ll try to get them next week.

PORSCHE CARRERA CUP NORTH AMERICA Presented by The Cayman Islands
After two attrition-filled doubleheaders to kick off the season, the Wright Motorsports Porsche Carrera Cup North America effort finally shook the proverbial monkeys off their backs at Watkins Glen International. In the opening practice sessions, each car showed strong speeds and consistent improvements, and in qualifying, Max Root secured his first pole position in the Pro class. He went on to secure second place in Race One. In the following round, Root repeated his performance from the day before, earning back-to-back second-place finishes. In Pro-Am. John Goetz celebrated his first podium finishes in the series as well, securing back-to-back third-place results at The Glen.

The next rounds of the Porsche Carrera Cup North America will take place August 6-8, 2021 at Road America, again in conjunction with the IMSA WeatherTech SportsCar Championship. For more information, visit porschecarreracup.us.

John Goetz | No. 57 Porsche 911 GT3 Cup
I love the Glen. It’s one of my favorite tracks in the country. I love the high-speed corners. I finished third on both days, isn’t ideal but is pretty good. I felt I hit most of my marks. I made a couple of mistakes in the second race but overall, it was a great weekend. Our whole team was so supportive as they always are. We’re leaving the weekend with cars in perfect condition, and it’s great to see everyone on the team enjoy this weekend. I’m thankful to Wright for doing everything so well. I don’t have to worry about a thing; I just get in the car and have fun.

Hutton McKenna | No. 88 Porsche 911 GT3 Cup
The weekend went great. We had some good battles. Alan Metni and I had a good last race and I got to gain two positions. I can’t be mad at that. The car ran great, and the team did everything they could to make it perfect. It was my first time here at Watkins Glen and it was a great track. I’m looking forward to the next one.

Max Root | No. 7 Moorespeed-Wright Porsche 911 GT3 Cup
It was a really good weekend at Watkins Glen. I started off strong with a pole position for race one and started second for race two. I managed the gap in race one and second was the best we had. In race two, I got a little optimistic at the start and tried to go around the outside, but unfortunately got a little bit of stuff on the tires and had to come out of it. But all the boys worked extremely hard this week. I’m really proud of the team and thankful to all the sponsors who make this happen.