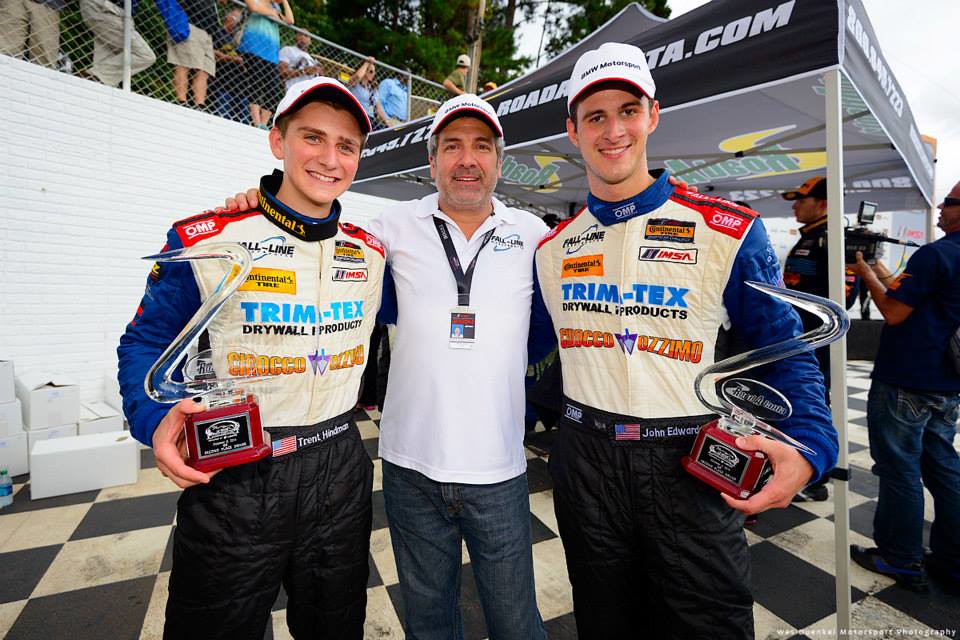 Entering into the final event, the No. 46 Fall-Line Motorsports Trim-Tex BMW M3 held a 5 point championship lead over Andrew Davis and Robin Liddell’s No. 6 Stevenson Motorsport Camaro. Hindman and Edwards ran strong in testing and practice sessions at Road Atlanta in the Fall-Line Motorsport BMW M3, but were thrown a curve ball when the qualifying session was red flagged after only two laps. Never putting together a flying lap, Edwards and Hindman earned a 17th place starting position. Competitors Liddell and Davis won the pole position and led the field to the green flag.

Trent Hindman started the two hour and 30 minute race, showing an impressive charge from 17th to 3rd place in the first hour. Edwards took over the driving duties after the first pit stop and due to an excellent pit stop by the Fall-Line Motorports crew rejoined in 2nd place ahead of #6 Camaro of Liddell/Davis. As the minutes wound down, the battles intensified. Edwards and Hindman only had to finish one position behind the Camaro in order to win the championship. Late race caution periods showed Edwards in 4th while Liddell held 2nd. With less than ten minutes to go, Liddell and Wilkens battled hard for second place. Edwards steered clear as the two had contact, taking them out of podium contention. John pressed through the final minutes to take second place and the 2014 title for Fall-Line Motorsport. The second place finish also gave Edwards the necessary points to overtake Liddell and Davis in the championship, giving Fall-Line Motorsports the top two championship spots. Together, Edwards and Hindman earned a total of five podiums and two wins throughout the 2014 season.

John Edwards
“Well that race was a lot more exciting than I wanted it to be. Even if the Camaro won, I would have much preferred a processional race like we had back at Mosport rather than going side by side nearly every lap. When I was side by side with Robin, I know I had a lot more to lose than he did. I thought I’d let him go and just sit there, but then the Mustangs were super-fast today so I really had to work for it. There was some excitement nearly every time I was on the back straight. I was under a lot of pressure and I knew I couldn’t lose my position, as dropping one more spot could have cost us the championship.

“Looking at our whole year, we  had a few races were we had some strange problems, like at VIR when a brand new alternator failed, but in the races that we didn’t have something abnormal happen, our lowest finish was 4th. It really says a lot about the consistency of the team and the fast that we could have a car capable of challenging for the win and for podiums. On the days we were 4th, we were a little disappointed, so I think that kind of says where we were all season. It’s a big relief for it to finally be over.

“Trent has done an amazing job. I met him when he was a little kid, but he’s matured a lot since then. First of all, he’s nearly my height now, but most of all, I see the maturity of his driving. Particularly today and in the situation where he’s under the most pressure he’s ever had in his career, starting from the back of the pack, he was able to pick cars off like crazy. He’s performed really well all season but especially showed it today.

“I couldn’t be more proud of all of the guys at Fall-Line for their hard work, and I’m thankful for the support of BMW. The M3 has been in the series for a long time, but it was still able to deliver a championship even as newer, more updated cars have come into the series. Even aside from the championship, it was great to be able to score another podium in the finale to cap the year off. It was an exciting season, even down to the final minutes.”