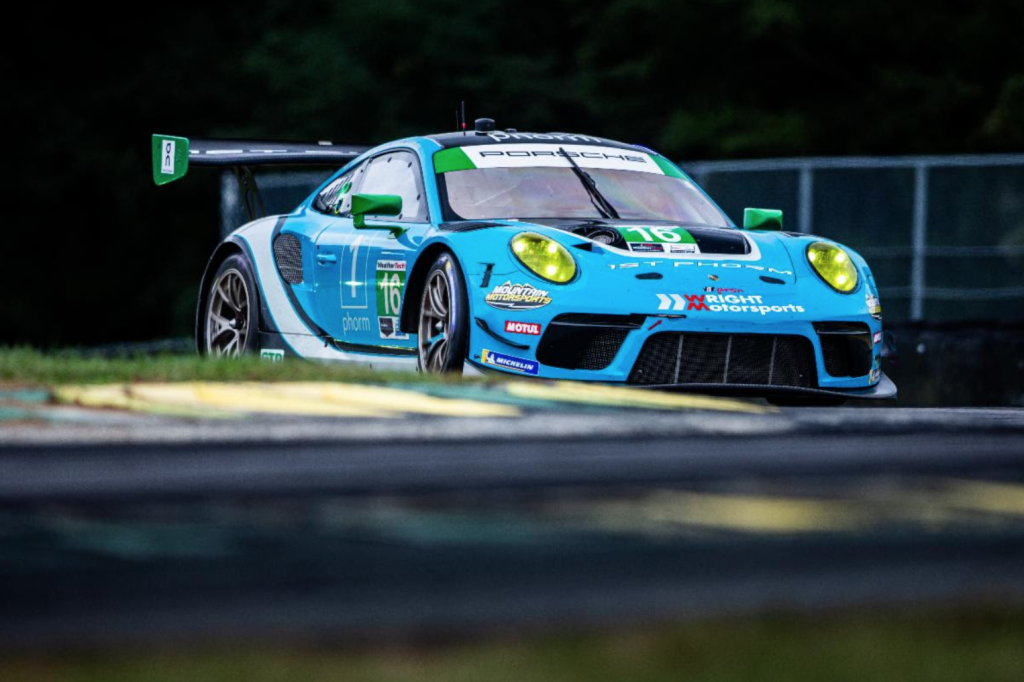 “Headed into the final event, we have championship titles on the line this weekend and that really speaks to the quality of the series as well as our own team,” said Team Owner John Wright. “Running in three series under the IMSA umbrella requires a great team of people on and off-track to keep everything seamless and successful, and we’ve done it. Our focus will again be to execute as best we can and see how the season ends.”

IMSA WeatherTech SportsCar Championship
The No. 16 1st Phorm Porsche 911 GT3 R has shown its strength all year, finishing on the podium for half of the races to date. With a strong performance during the endurance races, Wright Motorsports heads into the final event of the year leading the Michelin Endurance Cup: a four-race championship of longer races within the existing full season championship. The final points for this effort will be awarded at the four-, eight-, and ten-hour marks of the 10-hour race on Saturday, November 13. Allotments of five, four, three, and two points will be awarded, and Wright currently leads by one point, keeping the championship highly competitive into the final round. Primary drivers Patrick Long and Trent Hindman will once again be joined by endurance addition and longtime Wright Motorsports driver Jan Heylen.

In the overall championship, Wright Motorsports remains mathematically eligible for the title. However, being 279-points behind the leader and with only 385 points (350 for a win, 35 for a pole position) available, the three teams ahead of the Wright operation would have to withdraw from the event early in the race or have significantly poor finishes in order for the team to take the title.

The Motul Petit Le Mans will begin on Sunday, November 13 at 12:10 pm Eastern, with the first three hours airing live on NBC before switching to NBCSN at 3:00 PM Eastern. Fans outside the US can use the IMSA International Coverage guide to check broadcast listings by country.

Patrick Long
No. 16 Wright Motorsports Porsche 911 GT3 R
It’s great to be back at it with the finale at the Petit Le Mans. It is such a staple race for IMSA. It was also the first time I ever drove in an endurance sports car race as well [2003, TRG Porsche finishing GT class in fourth-place]. I have great memories at this track but we have a job to do and that is to finish up this season with another podium. The competition will be high, and the field will be stacked. I like our chances with our driver lineup with Jan back in the car. The team has been hitting its marks. It is going to be a great afternoon of racing with a little extra time in the dark so that will play into the strategy as well. We will need to be upfront all day if we want to be in a position to fight for a win so we will be executing on that plan. I am excited to get after it.

Trent Hindman
No. 16 Wright Motorsports Porsche 911 GT3 R
With Petit Le Mans being one of the marquee events on the IMSA calendar, it inherently brings the best out of every team that takes on the challenge. Ten hours on a short, balls to the wall racetrack like Road Atlanta is no easy task. The 1st Phorm/Wright Motorsports team has been a strong threat to win every single race this year thanks to the quality of equipment underneath and execution of the team supporting us. We’ve got one more great opportunity to bring it home together in ’21. I’d like to think the odds are overwhelmingly in our favor if we continue the job that we’ve been doing.

Jan Heylen
No. 16 Wright Motorsports Porsche 911 GT3 R
I’m really looking forward to competing in the Porsche 911 GT3 R again this weekend. It’s a big weekend for Porsche and Wright, having the chance to win two championships in GT4 and the WeatherTech Endurance championship. It’s not going to be easy, but I think we have the best team, driver lineup, and manufacturer to get it done. I’m super excited to go to Road Atlanta with the team that I’ve been with now for seven years and Patrick, my best friend. Its going to be a special weekend. I hope that for Ryan, the team, Porsche, and 1st Phorm, we can come out on top and add another championship to everyone’s resume. This is definitely one of my favorite, if not my favorite, races of the year.

Michelin Pilot Challenge
Momentum is on the side of the No. 16 Porsche 718 Cayman GT4 Clubsport entering the final GT4-spec race of the season, following Ryan Hardwick and Jan Heylen’s victory at VIRginia International Raceway in October. With the win, the team climbed from third to second place in the point standings, just 30 points behind the championship leaders. With 250 points awarded for a victory, the battle for the 2021 GS class title is down to Wright Motorsports and the two Turner Motorsport BMWs. If Wright Motorsports secures a podium finish, the team will need to be two positions ahead of the No. 95 BMW. If the team does not secure a podium, then they will need to be three spots ahead of the Turner car. With six podium finishes in eight attempts, the Wright Motorsports team has proven to be a strong championship contender heading into the final round.

For Michelin Pilot Challenge, the weekend will conclude with the Fox Factory 120, a two-hour sprint to the end of the 2021 season. Following qualifying on Thursday, November 11 at 4:15 PM Eastern, the field will take the green flag for the final race on Friday, November 12 at 1:10 PM Eastern on IMSA.tv as well as NBC Sports Gold’s TRACKPASS streaming service.

Ryan Hardwick
No. 16 Porsche 718 Cayman GT4 Clubsport
Well, it all comes down to this final race for the Michelin Pilot Challenge championship! To think that our team has a shot to win the title at Road Atlanta is really humbling when you consider that we missed the first race at Daytona entirely. We have fought hard at every single race thereafter and have clawed our way all the way through the highly competitive GS class field to now have a shot at the overall championship. Personally, I couldn’t wish for a better scenario than to compete for an overall championship at my home track, in front of so many friends and family from Atlanta. Our Wright Motorsports team has been in championship form all year, and we are all looking forward to this final race!

Jan Heylen
No. 16 Porsche 718 Cayman GT4 Clubsport
I’m equally excited to race the GT4 effort this weekend. We’ve had an amazing season with a few ups and downs, but it has been super fun fighting back to get back to being second in the championship. It has been a fun season together with Ryan. We’re in a really good place going into the last race with a very good chance of winning the championship, which, being a home race for Ryan, makes it extra special. It has been such good fun racing against everybody and I’m excited to go there and fight it out with the BMW and hopefully continue to do what we’ve been doing all season. The whole weekend is going to be about being consistent and coming out in front of the BMW. I can’t wait. Whatever the outcome, it’s been an amazing experience to do this with Wright Motorsports, Porsche, and Ryan. We hope for the best result, regardless, and I’ve had a really good time this year driving in GT4. Hopefully there’s more to come.

Porsche Carrera Cup North America Presented by the Cayman Islands
The three Wright Motorsports Porsche 911 GT3 Cup race cars, driven by John Goetz, Hutton McKenna, and Max Root, will also be finishing the year with ample track time, participating in the final triple-header race event of the year. Each driver of the Wright trio has shown strong growth over the season in the single-make series, earning four podiums and twelve top-five finishes. Looking to end the season on a strong note, the Wright Porsches will put up a good fight for those final podiums of the 2021 season. The first Carrera Cup on-track session will begin on Wednesday, November 10 with two practice sessions before race one and two on Thursday, November 11 at 12:10 pm and 4:45 pm Eastern, respectively. The Carrera Cup season will conclude on Friday morning, with race three at 11:15 am. All three races will stream live on porschecarreracup.us.