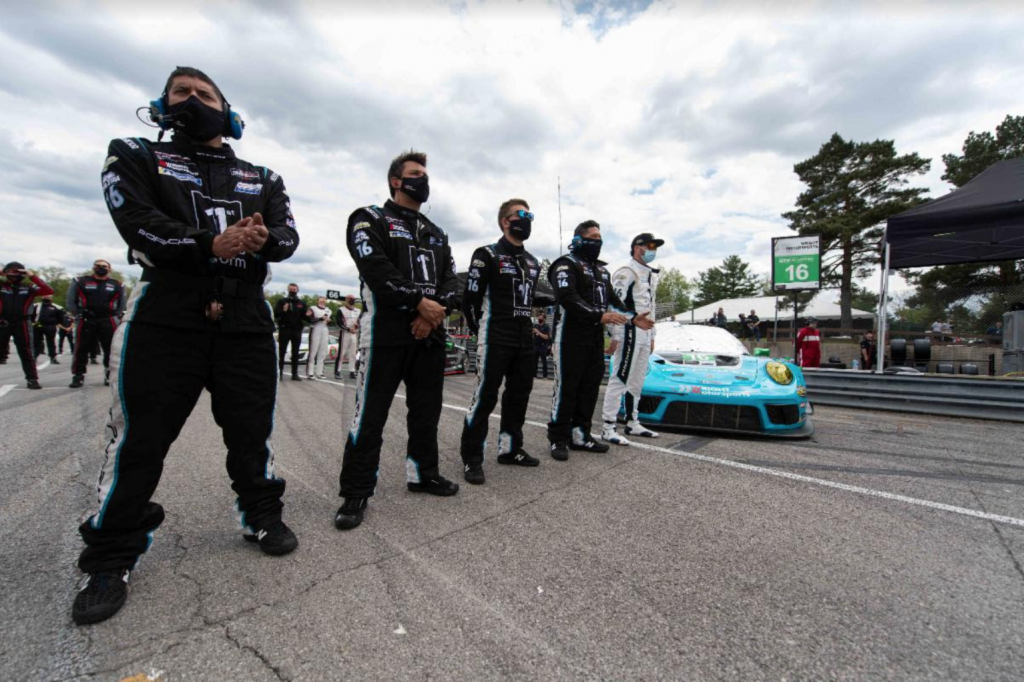 BATAVIA, Ohio. (August 3, 2021) – The 2021 motorsport season has presented Wright Motorsports with one packed race event after another, and this weekend is no exception. Starting this Thursday, Wright Motorsports will be supporting six Porsche entries at two different events, spanning over 600 miles. In Elkhart Lake, Wisconsin, the IMSA-sanctioned series of the WeatherTech SportsCar Championship, Michelin Pilot Challenge, and Porsche Carrera Cup North America will race at the famed fan-favorite permanent road course, Road America. Meanwhile, GT America, sanctioned by SRO America, will be competing in the inaugural Music City Grand Prix on the temporary course on the downtown streets of Nashville, Tennessee.

“The expansion we’ve seen at Wright Motorsports this year has really shown the strength of our program and the quality of the individuals we have to make it happen,” said Team Owner John Wright. “We’ve taken great care to get everyone in place and ready for our multi-city race weekend, and we’re ready to get racing.”

IMSA WEATHERTECH SPORTSCAR CHAMPIONSHIP | ROAD AMERICA
The drivers and crew of the Wright WeatherTech effort are no doubt eager to get back to racing after the previous round at Lime Rock Park was cut short due to prolonged lightning in the area. With the race red-flagged mid-event, teams had no opportunity to put their professional drivers in and let their strategy play out as intended. Weather won’t seem to be a factor this weekend, with Elkhart Lake, Wisconsin offering perfect summer days with temperatures ranging from high-50s in the morning to mid-80s in the afternoons.

Fourteen other entries are listed in the GTD class to compete against the No. 16 1st Phorm Porsche 911 GT3 R of Patrick Long and Trend Hindman, making it the largest class of the event. While the team leads the Michelin Endurance Cup points, the endurance championship within the full-season championship, Wright Motorsports currently stands fifth in the overall standings, just three points away from the next position ahead. Four races remain in the 2021 championship, the next three of which being sprint events. Sunday’s race, the IMSA SportsCar Weekend, will run for two hours and forty minutes, beginning on August 8 at 1:40 PM CT, airing live domestically on NBC Sports Gold’s TRACKPASS, and tape-delayed on NBCSN starting at 8:00 PM ET.

This will also mark the first event that autograph sessions have been on the schedule since the COVID-19 pandemic began in spring 2020. Long and Hindman will be signing outside the Wright Motorsports transporter in the WeatherTech paddock from 10:45 AM to 11:15 AM CT on race day.

Patrick Long
No. 16 Wright Motorsports Porsche 911 GT3 R
Road America’s long straights and flowing corners make it one of my favorite tracks to visit in the world. The racing is always fierce when we stop off here, so we will be hard at work to quickly dial our setup and hone-in our long-run pace. I am excited to get after it.

Trent Hindman
No. 16 Wright Motorsports Porsche 911 GT3 R
Dwelling on past rounds is generally not the way to move forward, especially in the midst of a championship hunt, but I think this Wright Motorsports/1st Phorm team is motivated for redemption – I know I certainly am. I’m excited to get right back to work with Pat and the team at a racetrack that seemingly suits the 911 GT3 R quite well. The strength and resolve this organization has shown all year long is pretty remarkable, the desired results will come as long as we keep doing what we are doing.

MICHELIN PILOT CHALLENGE | ROAD AMERICA
After a third-place finish last month at Lime Rock Park, the No. 16 Wright Motorsports Porsche 718 Cayman GT4 Clubsport, driven by Ryan Hardwick and Jan Heylen, jumped from fifth to second in the championship point standings. The team will be riding that momentum into Road America for the Road America 120, a two-hour sprint race on Friday, August 7. The team has shown strong pace and strategy all year long, finishing in the top five for every race entered this season.

Ryan Hardwick
No. 16 Porsche 718 Cayman GT4 Clubsport
I am excited to be heading into Road America tied for the Michelin Pilot Challenge championship lead. This might be one of the toughest tracks for our Porsche Cayman GT4, but our Wright Motorsports team is up for the challenge. We are going to keep doing what we have been doing, and that is focusing on consistent race finishes.

Jan Heylen
No. 16 Porsche 718 Cayman GT4 Clubsport
For the first time this year, we’ll be going into the weekend leading the championship, and that’s always a good place to be in, and something we’ve worked really hard on the last few weeks. We just need to continue doing what we’re doing and be consistent. Now more than ever, it’s important that we keep that championship in mind and that we make all the right moves and decisions to keep us upfront. Hopefully, we come out of this weekend extending our lead in the championship. Road America is a super fun track, and it presents a lot of good overtaking opportunities. For us, like any other time this year, we’re going to need a little help with the weather. It gets harder for us when it’s too hot. Hopefully, we’ll have cool mornings and not too hot afternoons. The car has been good all year. The team has been super consistent, and Ryan is doing a really good job. We’ll keep doing what we’re doing and come away with a lot of points. A win would be nice. In all the series and classes we compete in, we’ve been consistent. A win is missing here.

PORSCHE CARRERA CUP NORTH AMERICA PRESENTED BY THE CAYMAN ISLANDS | ROAD AMERICA
Coming off a successful weekend at Watkins Glen in June, the trio of Wright Motorsport Porsche 911 GT3 Cup race cars also have strong momentum heading into Road America for their next double header. Max Root not only picked up his first pole position of the year, but he and John Goetz together earned the team three podium finishes in two races. Hutton McKenna has also shown a strong consistency in the first half of the season and will look to continue to improve his progression as the team enters the remaining races of the year.

Both races will air live on imsa.tv and porschecarreracup.us, on Saturday, August 7 at 11:35 AM CT and Sunday, August 8 at 9:45 AM CT, respectively.

John Goetz
No. 57 Porsche GT3 Cup
I’m looking forward to a fun race at a wonderful track! Our Wright team is on point and ready to roll. The Porsche [type] 992 Cup car keeps feeling better and better.

Max Root
Moorespeed-Wright Motorsports No. 7 Porsche GT3 Cup
I’m very excited to get back to the Porsche Carrera Cup North America with Moorespeed and Wright in the No. 7 car. We have some great momentum coming form the last event at Watkins Glen. We’re going to take all the energy and trail it right into Road America. It’s a beautiful track; four miles of American excellence. I’m looking forward to maximizing the car and enjoying the weekend with the boys.

GT AMERICA | NASHVILLE
Charlie Luck will be taking on new challenges in GT America this weekend, as the series heads to the inaugural Music City Grand Prix on the streets of Nashville. The series, in its inaugural season, will join the likes of IndyCar, Stadium Super Trucks, and TransAm for the exciting new addition to the race calendar. Not only will the weekend present Luck and the other competitors with the task of learning a new course layout, but the temporary street course will provide little forgiveness to any car that suffers a mistake or misfortune. With two races in two days, the field will have to take special care of the machinery to make the most out of the doubleheader event in downtown Nashville.

Race one will take place Saturday evening, August 7 at 7:25 PM CT, followed by race two on Sunday, August 8 at 2:45 PM, and both races will air live on youtube.com/GTworld.

Charlie Luck
Porsche 911 GT3 R
No one has seen the course or been on it, so that’s super exciting because it’s new to everyone. It’s a great level playing field that way. I think there’s a real premium on the ability to adapt, learn, adjust as we get more and more track time to practice. Qualifying will be very important, as well as staying clean. Since it’s a street course, there’s no margin for error. One slip puts you into a concrete wall—not the grass, not a gravel trap. That makes a mistake very costly from a car damage standpoint. Our goal is to finish the weekend with no car damage, complete all the race laps, and try to optimize to the best optimal finish.