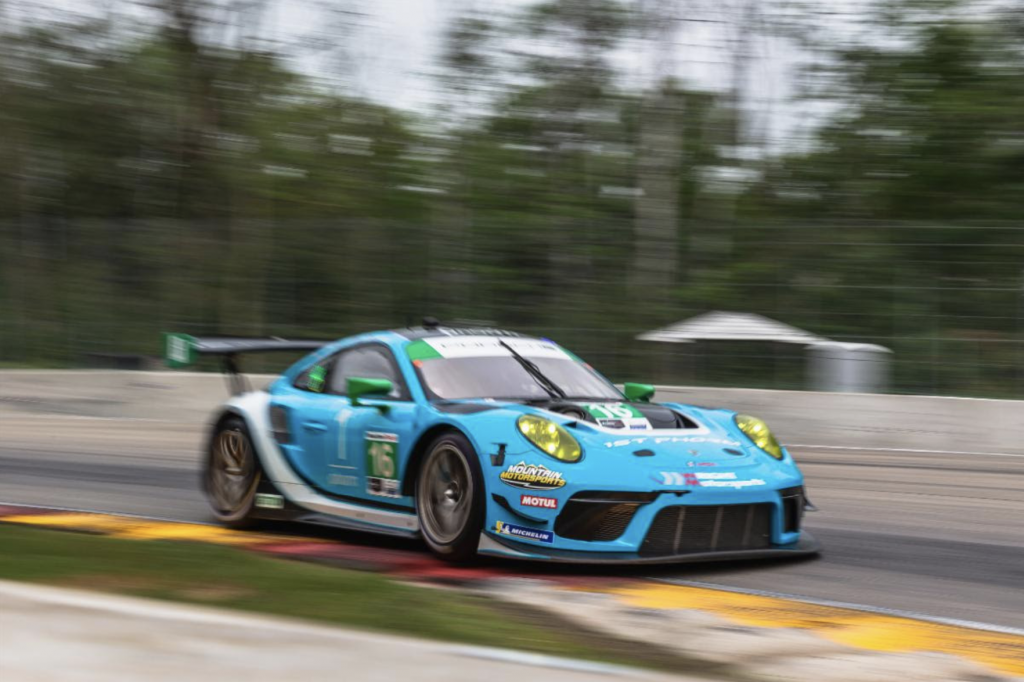 ELKHART LAKE, Wis., (August 2, 2022) – Three races remain in the 2022 IMSA WeatherTech SportsCar Championship, and this weekend, Wright Motorsports heads to Road America with sights set intently on the GTD class points lead. With two wins achieved so far this season, the No. 16 Porsche 911 GT3 R of Ryan Hardwick and Jan Heylen has held firm on to second place in the point standings since round four at Mid-Ohio Sports Car Course. This weekend’s sprint race, named the IMSA Fastlane SportsCar Weekend, will give the Porsche customer racing squad another opportunity to build on the points success of their two victories so far this season. The team will also have three cars onsite contesting in the next two rounds of the Porsche Carrera Cup North America Presented by the Cayman Islands.

“Road America is always a great road course to visit,” said team owner John Wright. “With the final stretch of the 2022 season in full swing, we tested here recently to prepare for this event with the goal to take back the championship points lead. The competition has been strong this year, but our consistency in execution both in and out of the car has always been one of our greatest strengths.”

Last season, the Wright Motorsports GTD effort earned a third-place podium finish at Road America, with drivers Patrick Long and Trent Hindman. The team started from second place and ran a clean race to earn a coveted podium spot, improving on the No. 16’s previous result of fifth place in 2020.

Stretching over four miles and with 14 turns around the wooded hills of Elkhart Lake, Wisconsin, Road America sets the bar for action-delivering circuits. All five IMSA WeatherTech SportsCar Championship classes compete in the annual event, with 37 entries set to compete in this weekend’s racing.

In addition to the previous test session the team was able to complete previously, the Wright Motorsports 1st Phorm Porsche will partake in the two series-wide practice sessions on Friday, August 5 before Ryan Hardwick qualifies for the team’s starting position on Saturday morning. For fans on site in Elkhart Lake, the race day festivities will kick off at 9:20 AM with the open grid fan walk, a one-hour stretch where fans can see the cars up close on pit lane before the race starts at 10:40 AM CT. The two-hour, 40-minute race will air live on Peacock, NBC Universal’s streaming service. For more event information, visit imsa.com.

Ryan Hardwick
I have a lot of respect for Road America. While I love driving and racing here, this place has always been a bit of a mystery for me. I usually feel confident and quick here, but I’ve had mixed results at this track over the years. Looking to change that this weekend! Our team had a productive test here a few weeks back, so we are looking to unload strong and be in contention for a podium.

Jan Heylen
I’m looking forward to being back at Road America, a track that has a lot of overtaking opportunities, which always makes the race exciting. We’re coming into the later part of the season and there’s some added pressure to perform and keep us in the championship. I feel like we’re in a good place, coming off a good run at Lime Rock Park where Ryan had a good stint and the car had good pace. I feel confident going into Road America to give the team a strong points run.

Porsche Carrera Cup North America Presented by the Cayman Islands
After a brief time apart, the Porsche Carrera Cup North America Presented by the Cayman Islands returns to race in support of the IMSA WeatherTech SportsCar Championship program, and the Wright Motorsport Porsches are back from their most recent race across our northern border. Varun Choksey (No. 13 Porsche 911 GT3 Cup) closed out the Honda Indy Toronto race weekend with two top-five finishes and John Goetz (No. 57 Porsche 911 GT3 Cup) placed second in both races, currently holding second place in the Am point standings. Hutton McKenna (No. 88 Porsche 911 GT3 Cup) will also be reunited again with the team at a track he has previously shown strong pace. Race one, the first of two races in the weekend, will begin on Saturday, August 6 at 8:50 AM CT, followed by race two at 8:20 AM CT. The races will air live in their entirety on imsa.com/tvlive or Peacock.