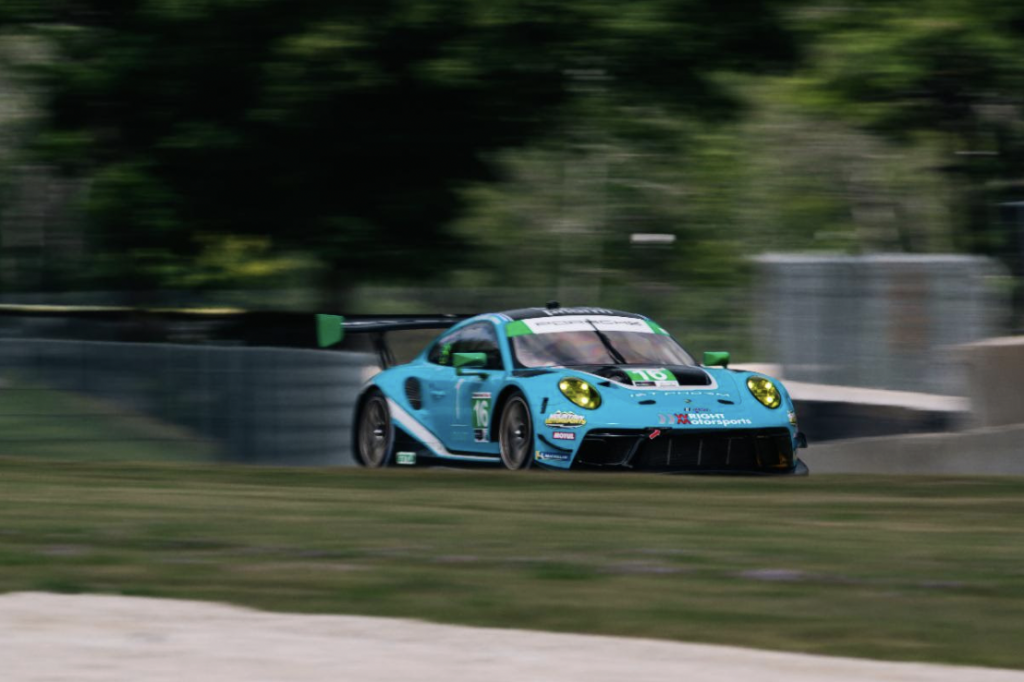 DANVILLE, Vir., (August 23, 2022) – As the IMSA WeatherTech SportsCar Championship season winds down, the pressure for the top honors only intensifies. This weekend, Porsche customer racing team Wright Motorsports heads to VIRginia International Raceway (VIR) in Danville, Virginia for the penultimate round of the 2022 GTD-class championship. The No. 16 1st Phorm Porsche 911 GT3 R, with drivers Ryan Hardwick and Jan Heylen, holds second place in the championship point standings, locked into a tense battle with Team Korthoff Motorsports and Heart of Racing Team.

“Wright Motorsports has been in the championship hunt in the final stretch of the season for the last few years, and this year is no exception,” said Team Owner John Wright. “That level of consistency is a testament to the quality of drivers and team members, and the program we’ve continued to build on these last few years. We love coming to VIR. The staff is great, and they’ve made some great improvements to the facility. This should be a good weekend.”

The 2022 IMSA WeatherTech Championship has been filled with excitement and anything but predictable. Hardwick and Heylen have secured two wins to date this season, once at the Rolex 24 At Daytona and again at WeatherTech Raceway Laguna Seca. Though other podium finishes have remained elusive to the team, the consistency in execution has kept the squad in the fight. Thirty-six points separate the Wright squad from the points leaders, with Heart of Racing just eight points behind the Porsche. A maximum of 35 points are awarded for qualifying on pole position, and 350 for winning the race, the bid for the championship lead exiting the VIR weekend remains wide open.

With just two rounds remaining, the team will be focused and ready for Sunday’s two-hour and 40-minute race. On track sessions will begin on Friday, August 26 with the first practice session, followed by practice two and qualifying on Saturday. Sunday’s Michelin GT Challenge at VIR will feature 18 GT entries competing in the five-deep GTD Pro class and the 13 entries that make up the GTD Pro/Am-ranked class. This weekend’s race at VIR is only one of two GT-only weekends on the 2022 IMSA calendar, where the three Prototype classes sit out of the competition. The field will take the green flag on Sunday, August 28 at 2:10 PM Eastern and the race will air in its entirety on CNBC and stream live on Peacock.

Ryan Hardwick
The race for the GTD championship is tightening up, and with only two rounds to go we are right in the fight. Our team is focused on executing every aspect that we can control, which is exactly what has brought us to this point so far this season. Our goal for VIR is to place ourselves in a good position to give us a shot at the championship at Petit. Personally, I love racing at VIR! I really like the flow of the track, and as always, I look forward to the challenge.

Jan Heylen
VIR is an awesome racetrack. I love going to this circuit because of the people that run it. It’s always exciting to go back there. We’re in the final two races of the season, and currently second in the championship. We know what to do. It’s fun to be chasing the title and I hope we come away from VIR with some points as we did at the last race. I’m really excited to be going there and hopefully have another good race with Ryan for the championship.