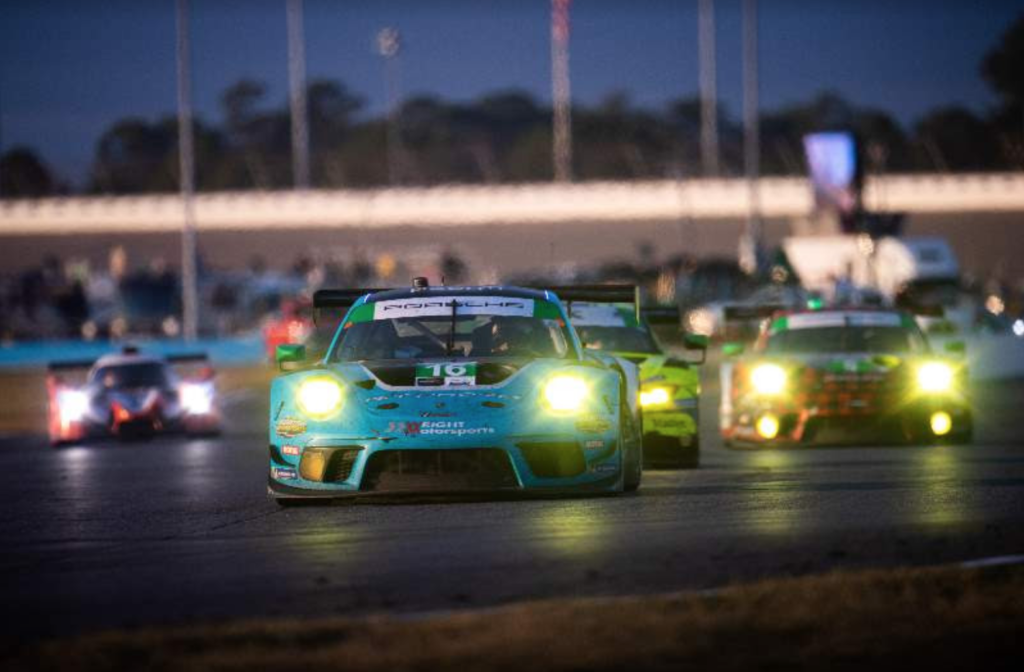 BATAVIA, Ohio, (March 16, 2021) – The Mobil 1 Twelve Hours of Sebring is just days away, and Porsche customer racing team Wright Motorsports has a busy race week in store. The team will field five entries between the four races of the IMSA WeatherTech SportsCar Championship, Michelin Pilot Challenge, and the new Porsche Carrera Cup North America, closing out the weekend with the 12-hour endurance racing fan-favorite event. Returning to defend their win of the headlining race, Wright Motorsports will be the team to watch this weekend.

“It has been an incredibly busy time for Wright Motorsports in preparation for this event, as well as our other programs,” said team owner John Wright. “We’ve been able to build some strong programs, and our new shop in Stuart, Florida has helped make the logistics of all these programs as smooth as possible. I’m proud of everyone on the team for getting us ready to not only resume our GTD and GT4 programs, but to also get everything ready for a three-car debut in the new Porsche Carrera Cup North America. I’m looking forward to getting the weekend started and fighting for the win in the Twelve Hour.”

IMSA WeatherTech SportsCar Championship
The driver lineup for the Mobil 1 Twelve Hours of Sebring will look slightly different than originally announced at the beginning of the year, following Ryan Hardwick withdrawing from the Rolex 24 at Daytona. Involved in a heavy shunt during a Michelin Pilot Challenge practice session, Hardwick sat out of the remainder of the race weekend, nominating Trent Hindman to step into his spot. Hindman joined Patrick Long, Jan Heylen, Bachler, and together the group earned a fourth-place finish in the No. 16 Porsche 911 GT3 R. Following the strong finish, Hardwick has elected to sit this second race weekend out, with every intention to resume driving duties at Mid-Ohio Sports Car Course May 14-16.

“There is nothing that I want more than to get back in the driver’s seat after what was a disappointing early end to my Daytona race weekend,” said Hardwick. “I’ve been working diligently in physical and cognitive therapy sessions over the past several weeks and making great progress. It was a tough decision, but I’ve made the call to sit this next one out at Sebring. I’m glad that Trent is stepping in once again, and I know he gives our team the best shot at becoming back-to-back Twelve Hours of Sebring race winners. I am focused on being back in the race car with my Wright Motorsports team at Mid-Ohio, and going after the IMSA Sprint Championship this season.”

Hindman will again sub for Hardwick, joining full-season driver Patrick Long and endurance addition Jan Heylen. The trio will be tasked with defending the team’s 2020 win at the Twelve Hours of Sebring, held just four months ago. The Wright Motorsports 1st Phorm Porsche ran competitively for all twelve hours, even with a damaged left rear shock. The blue Porsche was in the right spot in the final laps of the race, ready to put in that final competitive edge when it counted. The team jumped from third to first in the final 10 minutes of the race, earning Wright Motorsports their first endurance victory, and Ryan Hardwick his first IMSA race win. Armed with a strong lineup, Wright Motorsports will prepare a strong defense to return to victory circle this weekend.

Watch live as the field takes the green flag live on Saturday, March 20 at 10:10AM Eastern on NBC Sports Network. Domestic fans can also watch flag-to-flag on the NBC SportsGold TrackPass app, and international fans can watch via imsa.tv, with additional audio coverage available worldwide from IMSA Radio.

Patrick Long
No. 16 Wright Motorsports Porsche 911 GT3 R
I love the challenge of Sebring. It has to be one of the most difficult tracks to pull a perfect lap together with bumps and varied surfaces from different decades. I believe the additional car count and influx of new drivers will bring a new tempo this year’s race, but in the end, it’s really you against the track. I am looking forward to getting back at it and trying to back up the team’s awesome 2020 victory at the Twelve Hours of Sebring.

Jan Heylen
No. 16 Wright Motorsports Porsche 911 GT3 R
We’re all excited to go back to Sebring to try to defend our win. The team has been hard at work and I feel confident that we will have a car to fight for the top step of the podium. I’m incredibly grateful to be here with Wright Motorsports, Patrick, Ryan, and all our partners who make this happen. We wish Ryan was in the car with us, but we’re also happy to welcome Trent back.